Who Are These Key Men, Anyway? 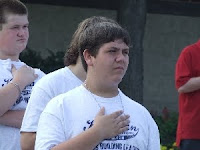 It's always fun getting to know the DeMolay members who come to the Key Man Conference, first as a group, for each year takes on its own character and identity. Later in the week we tend to identify the boys by the Chapters they belong to, and finally, by the end of the week, we see most of them as individuals. Of the 75 young men in attendance, 60 are in the regular Key Man mode, while the other 15 are in the Jurisdictional Officer program. 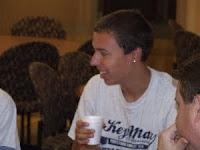 A registration day survey gives us a clue about who we have with us this year. All of our Key Men were initiated at age 16 or less, and 39, or more than half, came in at age 12. Five even admitted to joining at age 11, although we're not sure how that happened (and if we knew, we probably wouldn't say, either!) Nearly 2/3 were brought into DeMolay through their parents or a relative, and most of the others were brought in by their friends. (That should give you a clue as to who you should be marketing to!) 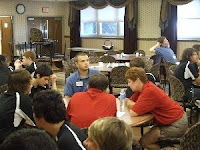 At least 53 of our 75 Key Man go to a church, synagogue or other house of worship at least occasionally, while 16 go weekly and 6 attend monthly.

Only 32 have an Obligations Card, leaving another 43 to earn them. Only 14 have the Representative DeMolay Award, which is a very low number, but presents us with the opportunity to get some of the 61 of them started in that direction.

When asked to identify their favorite DeMolay virtue or principle, a full third of them identified "brotherhood" with the other favorites in order; Comradeship, Patriotism, Filial Love, Reverence, and Courtesy. 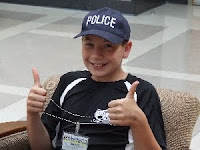 Just for fun we found out that more of them prefer the Phillies and Eagles than the Pirates and Steelers but not by a wide margin. Nike walloped Reebok in the preference poll, and most of our guys would rather have a hamburger than a hot dog, while drinking a Coke (not a Pepsi.) the Key Men definitely prefer dogs over cats by a 3-1 margin, but in golf, they'll take a flawed Tiger over Lefty Phil any day.

In the pop culture world, Star Wars beat out Star Trek by a 5-1 vote, Jeopardy was preferred over Wheel of Fortune, American Idol was greatly preferred to Glee, and in Twilight terms, Jacob (the cool werewolf) was twice as popular as moody Edward (the vampire.) 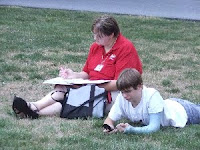 Lastly, 54 are "Yes" men and 12 think negatively ( by voting "No") and the rest landed their coin flip on the edge. Of course, when you don't know the question, this just becomes a referedum on their general attitude. 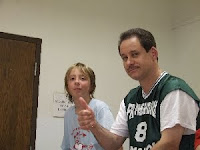 Later in the week, I'll tell you about what they like and dislike most about DeMolay, and what they would change (if they could make changes) in the program. 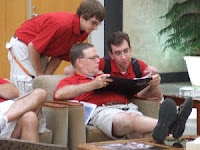 Suffice it to say that these Key Men make up a very diverse group of potential leaders for their Chapters and jurisdictions. It is a pleasure watching them in action and working with them.

-Tom Labagh, Executive Officer
Posted by PA DeMolay News and Views at 12:56 AM