The Fraternity Bands Together

Today's article is from "Dad" Tom Labagh, EO of PA DeMolay. He recently posted a note to Facebook about some great things that are happening in PA DeMolay. I thought they were really worth sharing. Enjoy!

I am so proud to be a Pennsylvania Freemason! I am sorry for the long post, but I need to share with all of you how the Masonic family in Pennsylvania is joining with Pennsylvania DeMolay to help raise money to pay for a liver transplant for one of our members. In February, Bro. Parker Harley, 18, was diagnosed with a rare liver disease called primary sclerosing cholangitis (PSC). The only definite treatment for PSC is a liver transplant and lifeling medication. Parker comes from an active Masonic Family. His Dad, Bro. Jack Harley, is a well-known Past Master of Ephrata Lodge No. 665. His Mom is in Eastern Star. His brother was a DeMolay member, too. Of course, the family is actively working in the community and through a wonderful network of family and friends to raise money, but, Pennsylvania DeMolay wanted to help out too. Every PA DeMolay Chapter is committed to making a contribution or raising funds to help. Many leaders who have been honored with the DeMolay Cross of Honor, the DeMolay Legion of Honor, or the Degree of Chevalier have made very generous personal contributions. Other Masonic groups from across the state have made contributions because these honor-recipients have shared Parker's story. DeMolay leaders from other states have made personal contributions. Since July, we have raised over $14,000, just through our Pennsylvania DeMolay campaign.

The Order of the Amaranth in PA, led by Mrs. Karen Hettel, has asked all its Courts to contribute.

Bro. Tim Pletcher, District Deputy Grand Master for District 30, called to tell of a Lodge that has chosen to give the year-long collection of contributions by a social dinner club to Parker's care. Every day, something new arrives. Every day we see the heart of our Pennsylvania Masonic Family.

You can learn more about Parker by watching the video we posted or visiting this Facebook page:
https://www.facebook.com/PoundItPark

And if you, or your Masonic organization would like to contribute, checks can be made payable to the "Parker Harley Benefit Fund" and send it to PA DeMolay, 1244 Bainbridge Road, Elizabethtown, PA 17022. Every donation of every size is needed and deeply appreciated. All will be deposited directly into the fund, and acknowledged.
Posted by PA DeMolay News and Views at 8:48 AM No comments:

Today's post continues my recent series of articles related to the new online DAD Training we're working on. One of the things we want to do is provide a short but concise history of DeMolay and its evolution here in the Keystone State. We dove back into the history books and pulled out some of the most important facts and put them in a timeline format. This should help everyone plot the development of DeMolay, right up to the present day. This resource will appear as a part of the historical section in the online training, so check it out!

Let us know what you think in the comments sections!

Frat! ~ "Dad" Seth Anthony
Posted by PA DeMolay News and Views at 9:49 AM No comments:

On Monday, I gave you a preview of one of the organization charts we are using in the new online version of the DAD Training. The chart you saw was for the young men, but we all know that the adult volunteers of DeMolay are organized a bit differently. We just put the finishing touches on the Adult Leader Organization Chart and I'm happy to share it with you today! Please note, this chart was developed with Pennsylvania DeMolay in mind, but much of it applies to the organization as a whole. 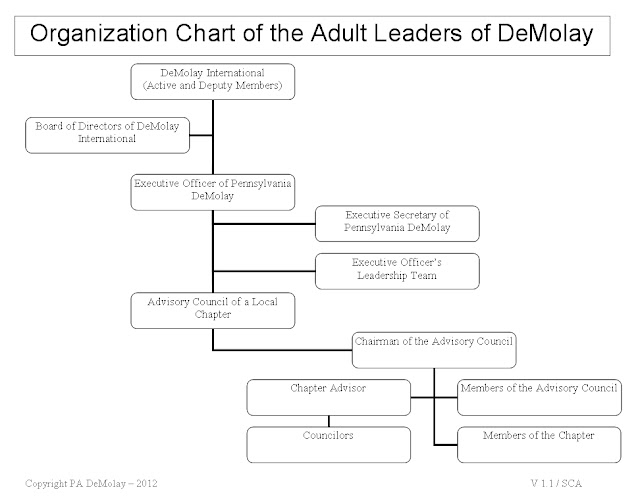 I hope this chart clears up some questions for you!

Frat! ~ "Dad" Seth Anthony
Posted by PA DeMolay News and Views at 8:44 AM No comments:

A Preview of Things to Come

Here at the PA DeMolay office we juggle many projects at once. One such project is the upcoming online DAD Training program. While still in its infant stages, we are working diligently to pull together the resources necessary to do DAD and DAD Plus training programs through an electronic medium. This requires us to produce a lot of documentation and resources. One of the things I've been pulling together is an organization chart of DeMolay. Today, I thought I'd give you a preview of that piece. This should give the newbies a good idea of how the youth lead our organization while giving veteran DeMolay folks a new way to look at things.

Please keep in mind that these are draft documents and do not represent a final product. They are also tailored for Pennsylvania.

First, let's look at the chart itself: 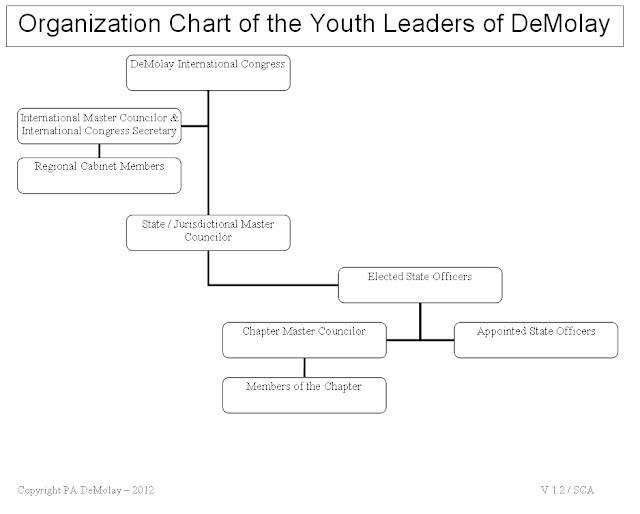 Now, let's go through the descriptions for each entry on the chart:

I hope everyone will find this useful and feedback is always welcome!


Posted by PA DeMolay News and Views at 11:07 AM No comments:

As I looked at doing today's blog post, I knew I wanted something different. The Key Man pieces we've been posting have been great, but I wanted something a little more visual and exciting for today. Thankfully, I recently received an email that ensured I could do that!

DeMolay in Brazil is a big deal. There are thousands of members in that country alone (and it rivals the size of DeMolay International.) There are lots of young men and Advisors in Brazil who have the teachings of DeMolay in their heart; one such person is Bro. André William Chormiak.

He and I first began communicating via email when he contacted me about some membership program questions. Later, we continued to chat about history and other items. I get about one email a month from him. Sometimes it's just about what is going on in Brazil DeMolay, but other times it might be of interest to a broader audience. His last email was one of those situations.

Bro. Chormiak is a big collector of DeMolay and has amassed quite an impressive number of pieces of memorabilia relating to DeMolay through the years. He passed along some pictures from his collection and I wanted to share them with you. It contains items from both the United States and Brazil. I hope you enjoy! (Don't forget, you can click the images to see a larger version!) 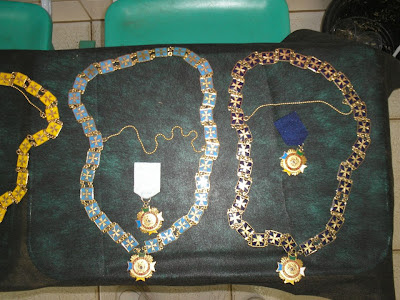 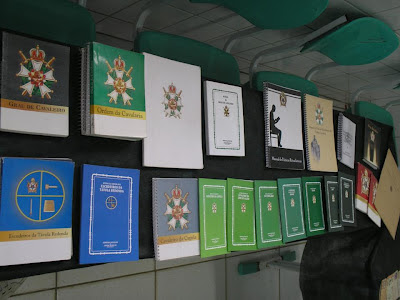 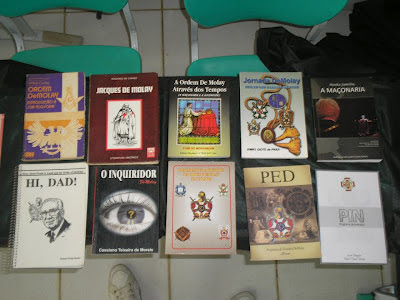 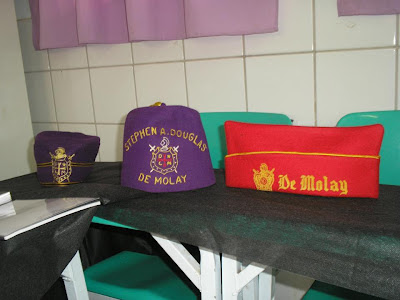 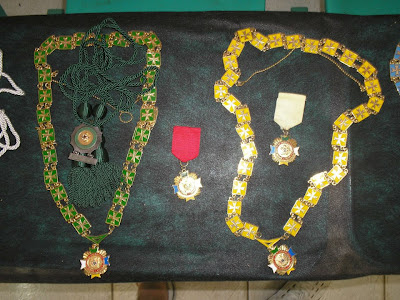 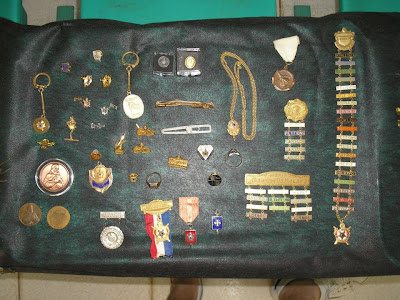 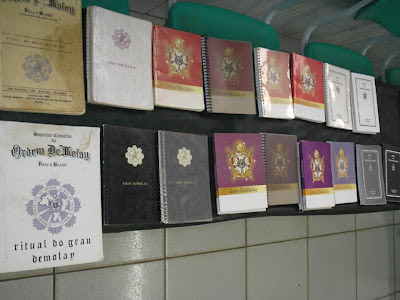 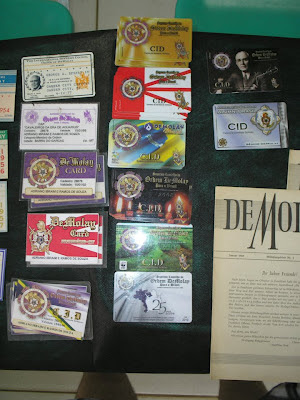 Posted by PA DeMolay News and Views at 9:06 AM 2 comments:

A Moment of Prayer

This piece originally appeared in the "Key Crew," the official newsletter of the Key Man Conference. It was written by Bro. Jordan Ippolito, who was participating in the JO track at KMC 2012. The article caught the eye of "Dad" Labagh, EO of PA DeMolay, and he sent it my way, recommending it as a blog post. Enjoy!

Why do we say a prayer before each meal? We do not just do it because we have to, but because we want to give thanks for the food we are about to receive, as well as what we have and those who are surrounding us. Realizing that blessings happen every day, it is of the utmost importance that we, as DeMolays, be thankful for these things provided to us. DeMolay does not tell us to worship any specific faith, but simply encourages us to be reverent people and realize the blessings from God. So, from now on, every time we say a prayer, remember to be thankful all that you have and that we are also observing our Second Precept, Reverence for Sacred Things.
Posted by PA DeMolay News and Views at 2:45 PM No comments:

This piece originally appeared in the "Key Crew," the official newsletter of the Key Man Conference. It was written by Bro. Alex Garcia, who was participating in Track 2 at KMC 2012. The article caught the eye of "Dad" Labagh, EO of PA DeMolay, and he sent it my way, recommending it as a blog post. Enjoy!

During Ritual Hour, we at Key Man Conference learned the basics of why we need to know ritual and why it is so important to the core of organization. We learned not just the words, but what the meaning is behind the words. Once you understand what the true meaning is behind what you are saying, it becomes much easier to learn the ritual and the words will come to you more easily. However, learning ritual is not just about memorizing and learning the values that the words teach; it is also an honor. By learning the ritual we will have the privilege to follow in the footsteps of all the DeMolays who have come before us and said these same words. Over the next few days, each of us will have the opportunity, with help of our Advisors, to learn the ritual that has meant so much to so many of the members of this organization over the years, and we can all earn our Obligations Cards!

Posted by PA DeMolay News and Views at 10:31 AM No comments: 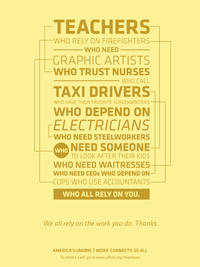 Happy Labor Day everyone!
Posted by PA DeMolay News and Views at 11:03 AM No comments: