Be the Example and Lead

The overall goal of DeMolay is to build young men into better leaders. We always hear that the key to being a leader is to "Lead by example." How does one accomplish this? Here are some important steps I found that will help us effectively lead by example: 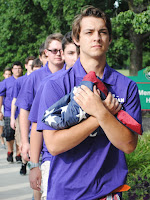 1. Take responsibility. As a leader, mistakes may happen. Laying blame to those mistakes will cause you lose your credibility. The key is to help guide in fixing those mistakes.

2. Be truthful. Everyone's parent has once told them that "Honesty is the best policy." As a leader, if you're not honest with others, they will lose respect in your leadership qualities.

3. Be courageous. If members of a team see that you are willing to take the risk, they will be more likely to follow. Be the first to take the leap.

4. Acknowledge failure. Not every mission is a successful one. Learning from our failures is what makes us better people, and in this case a better team.

5. Be persistent. "If at first you don't succeed, try, try again." A leader doesn't give up too easy. A goal can still be attained even if it's not achieved the first time. The harder you work, the more likely the goal will be attained.

6. Listen and learn. Asking questions is a sign of efficiency, not a sign of weakness. Just because your in a leadership role, doesn't mean you can't listen, take suggestions and ask questions.

7. Delegate based on strengths. Do not take on all the work yourself. Every member of a team has core values. Figure them out and utilize them to reach success.

For anyone going through the chairs in DeMolay, planning to become a State Officer, or in some way will work in an area that involves leadership, I urge you to think about these steps. Be the leader that others need you to be.

Here is the link that I found my information if you'd like to view it.
http://www.soulcraft.co/essays/lead_by_example.html
Posted by PA DeMolay News and Views at 2:45 PM No comments:

Films Every DeMolay Should See: Remember the Titans

This year, State Master Councilor Eric Dye has been promoting the theme "Lights Camera Action: PA DeMolay Goes Hollywood." All of the weekends and activities have been planned around a movie or genre to help enhance the quality of the program. It seemed fitting to post a blog about movies that members of DeMolay should see. Over the remaining months you will see a few of these posts highlighting a specific move that you may want to check out. 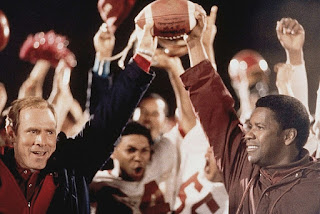 For anyone that knows me, I am an avid sports fan. This goes beyond the game itself for me, as some of my favorite movies of all time include sports films. One of my all time favorite sports movies has always been Remember the Titans. The movie stars Denzel Washington as Daniel Boone, the Head Coach of the T.C. Williams High School football team. The film takes place in Alexandria, Virginia in the year 1971, a time in which racial discrimination was still a concern in Virginia. Members of the T.C. Williams football team were not welcoming of the new members of the team or the new Head Coach, as they expressed their displeasure and got into fights constantly. Community members expressed there dissatisfaction of the changes made as well, causing disturbances for Coach Boone and his family. Coach Boone decided that the team needed to find away to get past their problems and work together. He took the team to training camp in Gettysburg, in which they worked harder than they ever have before. Although the process may have taken a while, the players became a unified team at the end of training camp. The team became a powerhouse team in pursuit of a state championship. The entire film highlights the adversity that took place in order to accomplish a common goal.

So what makes this a movie that every DeMolay should watch? Some of the important lessons that are taught in this movie, are the same lessons we teach in DeMolay. Some of those lessons include comradeship, tolerance, teamwork, and overcoming the odds to meet the goals at hand. Facing adversity is a big lesson in this movie, and in DeMolay we can come in contact with that same problem, realizing that it comes with the territory of being a leader. One of my favorite quotes in this movie is when Bertier tells Julius he doesn't play hard enough, he tells Bertier "Attitude reflects leadership, Captain." I always felt this lesson was important. As a leader, our attitude and reactions are most important for others to follow our lead. Lead by example, others will work hard if you do as well. This movie is also based on a true story, which makes the lessons taught mean so much more. Another reason you may want to check this movie out is because of the up and coming stars that appeared in this movie before they became big names in the industry. Those stars include Ryan Hurst, Donald Faison, Kate Bosworth, Ryan Gosling, and a very young Hayden Panettiere.

To this day, I still enjoy this movie like it is the first time I ever saw it. Hopefully this review inspired you to check out the film, as it is an all time classic.

Posted by PA DeMolay News and Views at 2:04 PM No comments: 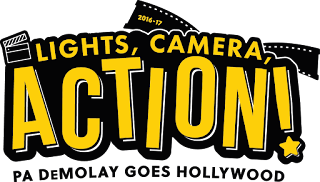 The new year has been upon us for roughly two weeks now, but this weekend is the official start of the new year for PA DeMolay with Cowboys VS. Aliens Weekend. Although 2016 is behind us, the year brought us some great moments. If you weren't around for 2016, then here is a top ten list of what you missed out on:

9. Friendship-Bray Chapter hosts a meeting with over 150 Master Masons in attendance. This was also the first meeting that FBC returned home to their original location in Jenkintown, after several years in Hatboro. Its always great to see such great support coming from the Masonic Family.

8. Dodgeball for Dyslexia grows into a spectacular annual event. This year was the second event, and plans are already in motion for a successful 2017 tournament. Chapters and Masonic groups gathered to help raise money for a great cause. Nearly $1,000 was raised and donated to the Learning Centers in Lancaster, Harrisburg and Pittsburgh.

5. PA DeMolay is still being different... by taking the show to Hollywood. Before Convention 2016 (If you weren't there, I'm sorry) SMC Adam Pritchard was encouraging PA DeMolay to "Be Different." During the 2016 Convention, in-going SMC Eric Dye introduced his theme for the year: Lights, Camera, Action: PA DeMolay Goes Hollywood. The year has been exciting with new events still to come.

4. NERF or Nothing! In January, PA DeMolay hosted the first ever all NERF weekend with Operation N.A.S.H.V.I.L.L.E. Training Weekend (Please ask Jake Beers what it stands for if you really want to know.) The function room was set up into a War Zone with games going on all day long. Congratulations to all of the winners.

3. PA DeMolay beats the Right Worshipful Grand Master in a game of Basketball. At Grand Master's Class, the RWGM of Masons in Pennsylvania, Raymond T. Dietz, challenged the members of DeMolay to a game of PIG, a basketball game in which a letter is given to a participant who misses a basket. Brothers Mitch Holmes and Kody Anderson won the game, $5 for every member, and bragging rights for all of PA DeMolay.

2. "Dad" Samuel C. Williamson was inducted into the DeMolay International Hall of Fame. "Dad" Williamson has been a staple in the activities that are PA DeMolay for over 30 years. Since his resume is so detailed, I will save the length of this section, just know that PA DeMolay would not operate without his overwhelming support.

1. We brought in 100 new members this year. We had a really great year in membership this year, keeping the brotherhood going for several new young brothers.

Wow! That's a lot to take in. 2016 really was an exciting year. So, how does PA DeMolay plan to make 2017 just as exciting? You'll have to wait and find out, but I can promise you that you will not be disappointed.

Until next time - "Dad" Joe Pullin
Posted by PA DeMolay News and Views at 2:43 PM No comments:

The following message is a Public Service Announcement from Elizabethtown DeMolay inviting you to the annual Dodgeball for Dyslexia Tournament. 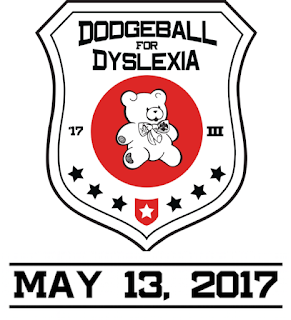 Look at that - what a shiny new logo! Dodgeball for Dyslexia is new, improved, and better than ever in its third year of existence, just like its logo. Now, you may ask, “Hey, how can a charity dodge-ball tournament that raised nearly $1,000 last year alone get even better?” which is a very keen and flattering question. The answer is easy: it starts with you. We had a total of 7 teams last year, with strong showings from Westmoreland and Pilgrim, but in order for the level of awesomeness to reach maximum capacity, we need more teams. So, if you are not completely convinced of joining this incredible event, let me suggest three solid reasons of why you should participate in Dodgeball for Dyslexia III.

Would you like to reap the benefits of donating to a charitable organization and feeling connected to your fellow members of the human race? Then this tournament is for you. All profits from Dodgeball for Dyslexia are given to the Children’s Dyslexia Centers, which provides tutoring at no charge to children from early elementary through high school who have been diagnosed as dyslexic. Children are eligible regardless of economic status or Masonic affiliation. The positive impact of early intervention on the lives of these children and their families is enormous and inspires our commitment to this program.

Dodgeball is a sport. Sports are games. Games are fun. With this undeniable logic, it is safe to assume that you will have the time of your life at Dodgeball for Dyslexia. Whether you are experiencing the thrill of joining comrades in the exertion of physical activity or you simply enjoy hitting your advisors with soft, rubber spheres, this activity is always a boatload of fun. Not just a small dinghy of fun, but a Titanic size boat of fun sans the sinking.

If the emotional satisfaction of benefiting humanity and enjoying time with friends and brothers isn’t your cup of tea, you can also win the long sought-after gold, silver, and bronze dodgeballs. The gold, of course, goes to the victor of the entire tournament, but just as important is the silver dodgeball, which goes to the team with the most team spirit, and bronze, which is given to the team who raised the most money to the Dyslexia Centers. So, seek victory and claim a few dodge-balls for your home chapter!

As I promised, three solid reasons to participate in the Dodgeball for Dyslexia tournament on May 13, 2017 at the Spooky Nook Sports Complex in Manheim, PA. If you have any inquiries, feel free to contact Brother Evan Crawford at evane2@ptd.net.

Make a team: make a difference.

Posted by PA DeMolay News and Views at 10:57 AM No comments: