Back with a Bow Tie


Hey there PA DeMolay fans. I want to apologize for the less-than-regular updates over the last week. It's been a bit busy in my world and the Blog just didn't make the top of the list of things to get done. But, fear not! For, I'm back and ready to blog some more (I mean, we are at darn near 500 posts on this thing!)

I know many DeMolays have become interested in how to tie a bow tie. So, I dug up the video from the Art of Manliness Blog and thought I'd share it with you here as a good way to get back into the groove. Enjoy!

Keystone Crusader - 50 Years Ago This Month

One of the goals for our 90th Anniversary Year has been to publish the entire back catalog of the Keystone Crusader online in a digital format. The Keystone Crusader (sometimes called the Newsletter of the Associated Chapters of PA DeMolay) has been published since the early 1930s, with a break from 1942 to 1960. It recounts the history of PA DeMolay in a way that no other medium can just, such as newspapers recount the history of the towns they serve.

This project took a major step forward last week when Bro. Alex Rodriguez, State Senior Councilor, put in the time needed to scan and catalog every issue of the Key Cru that we have. Thanks to his hard work and dedication, we now have a digital copy of every issue of the Keystone Crusader in our possession. It is my goal to get these issues published online before Convention 2014 - and hopefully much sooner than that.

As I get time, I've been going through the issues and reading them, discovering some interesting historical pieces along the way. Today, I want to share with you what was happening in PA DeMolay 50 years ago this month - February of 1964. Let's take a look, page by page (you can click the image of the page to make it larger. 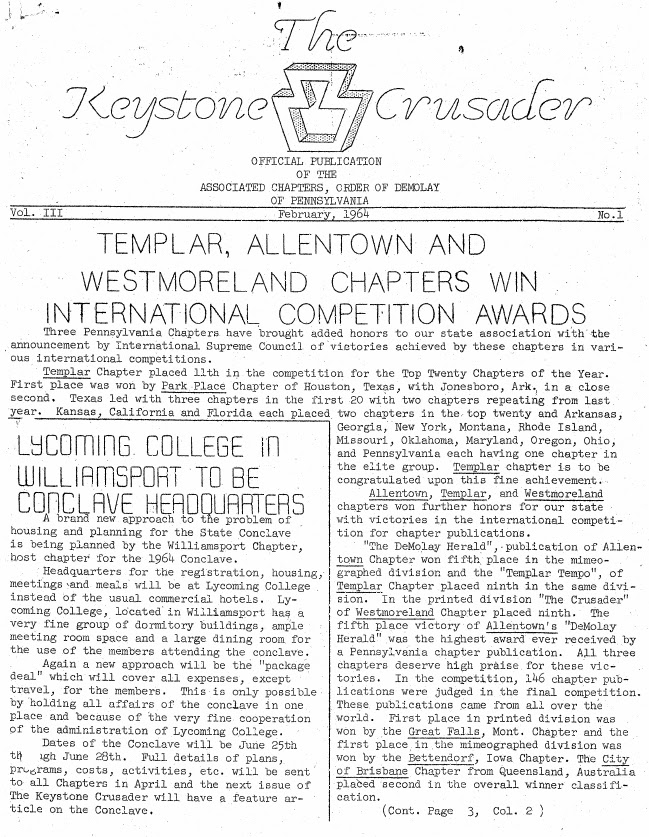 Starting with page one, you'll see the familiar title of the Keystone Crusader, which has been in use almost continuously since the early 1930's (except as noted above.)

The first headline you'll notice contains the name of three prominent PA DeMolay Chapters that are still active to this day - Westmoreland, Allentown, and Templar. These Chapters were being recognized for their placement in DeMolay International competitions. Templar was recognized as the No. 11 Chapter in DeMolay International, which at the time, was high honors (considering there were thousands of active DeMolay Chapters in the United States at the time.) Templar was also honored, along with Westmoreland and Allentown for their newsletters. Allentown continues to have a great newsletter today - I wonder how the Allentown's DeMolay Herald would compare with their Newsletter today? 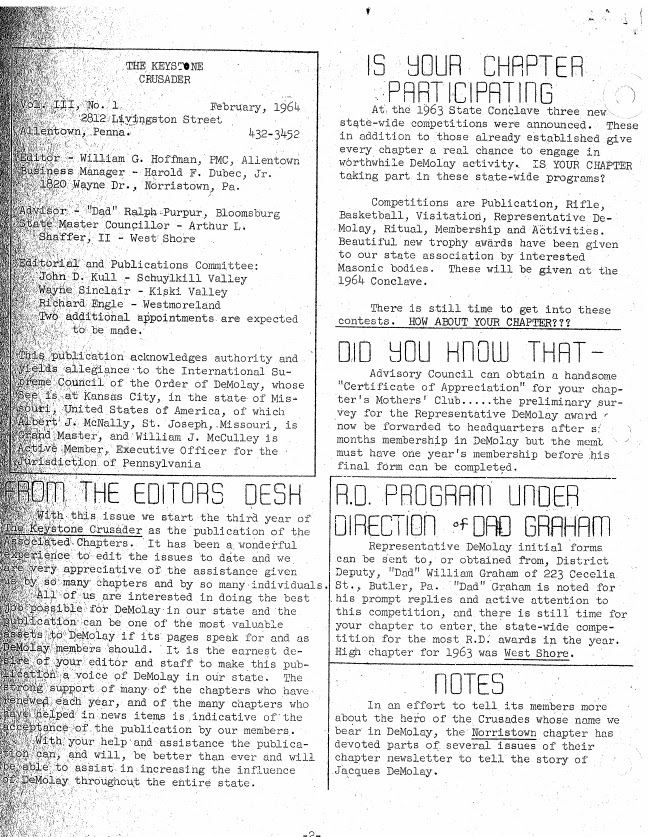 On the second page, we find lots of small boxes of text with news about changes and updates to the PA DeMolay program. Interesting to me is the Letter from the Editor, which describes how the Keystone Crusader was a subscription publication and that anyone wishing to receive it would have to pay the subscription cost each year. That's certainly different than how we operate the Crusader now!

We also find a note about Chapters wanting to participate in the "State" Conclave for 1964. The annual meetings of PA DeMolay were referred to as Conclaves until the 1990's, when the more pragmatic word "Convention" was adopted. Of special note is all the competitions that were to be held at Convention that year. Imagine if all of our sports tournaments happened in one weekend at Convention! 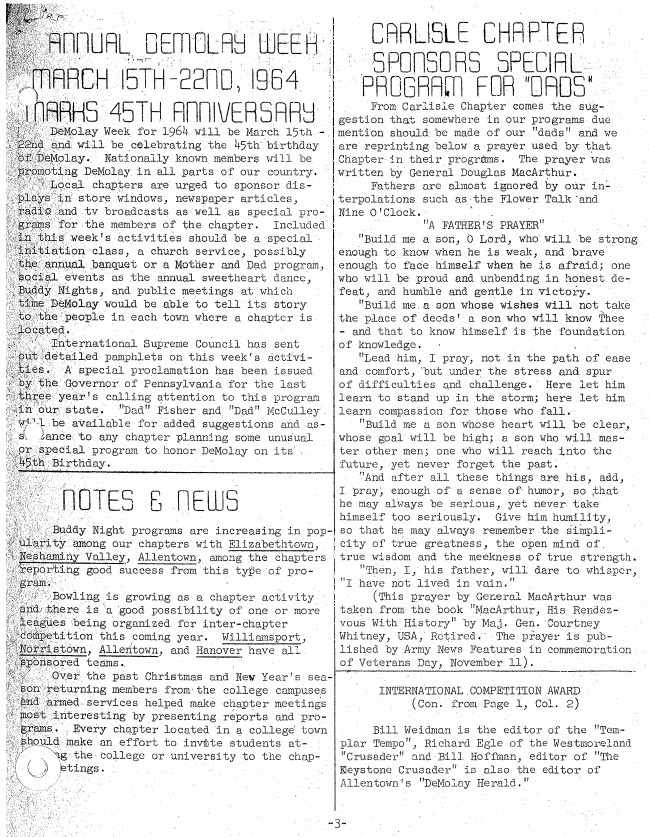 On page three, we find an interesting article from the folks at Carlisle Chapter. I think this is especially pertinent now, as Carlisle Chapter has recently reemerged and is an active participant in PA DeMolay today. The Chapter was being recognized for performing a Father's Program, including a nice prayer that was printed here that was original included in a book by Gen. Douglas MacArthur. They noted that DeMolay does a great job of thanking our mothers, but we often overlook our fathers, who also deserve such recognition. Perhaps the folks from Carlisle can revive this program!

One other interesting note on this page - Chapters locate din college towns were being encouraged to invite college students to check out the Chapter. While this may be tough in today's market, it does remain an interesting idea for recruitment! 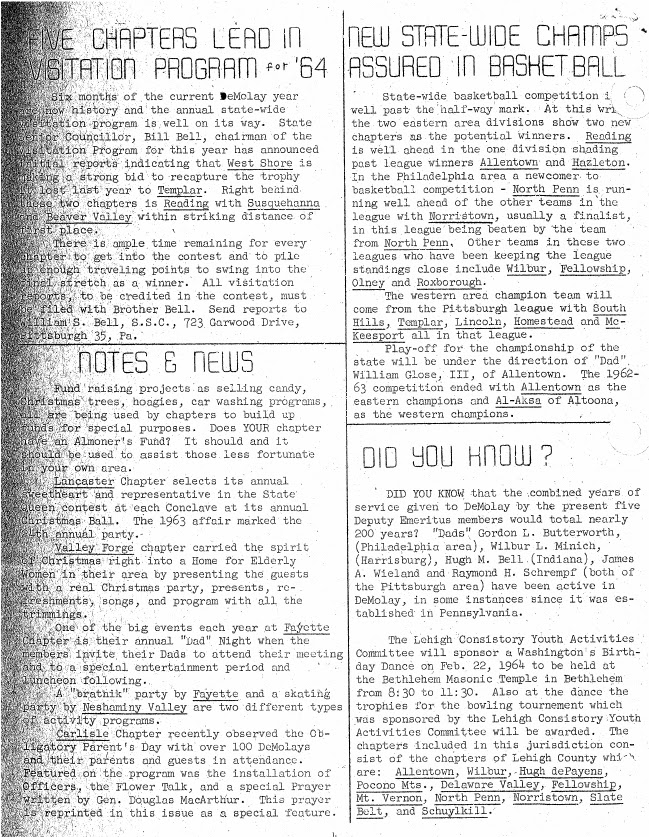 Page four marks the last page of this issue, but there are still some good facts to be pulled. While Westmoreland may pride itself on being a Chapter that does a lot of visitations today, they were no where to be found in 1964. The leader at that time was from the Harrisburg area, the former West Shore Chapter. Also included in the list of strong visitations Chapters were Templar, Susquehanna, Beaver Valley, and Reading.

We can learn a lot about our past as DeMolays by just simply reading and understanding what has come before us. Often, we find that our best ideas are ones that were tried by those that have come before us, but were lost in the sands of time. I hope you've enjoyed this look back and I hope to do more of these articles in coming months, at least until I get the full back catalog posted online. Until then...

Frat! ~ "Dad" Seth Anthony
Posted by PA DeMolay News and Views at 9:58 AM No comments:

Who's excited about taxes?!?

It's the time of year that all adults dread - filing taxes. It's not something people enjoy doing, but it is a necessary part of our society. In that same vein, DeMolay Chapters need to file paperwork for taxes every year in the form of a 990.

Recently, DeMolay International put together a nice presentation on what filing a 990 means for a  DeMolay Chapter. I encourage all Advisors to check this out and make sure their Advisory Council officers are in the loop with it as well!

Frat! ~ "Dad" Seth Anthony
Posted by PA DeMolay News and Views at 9:15 AM No comments:

While trying to come up with a good topic for today, I came across this infographic about success in life and extra curricular activities. Studies continue to show that activities outside of school, such as DeMolay, provide key life skills to those involved and better prepare members of the job market and real life. Check it out: (Click to make the image larger)

As you can see, by almost every measure, being involved with an organization such as DeMolay will increase your standing in society and give you a leg up. Taking a leadership role will take you even further. The next time you're trying to recruit a new member, have the advisors use this information to talk with his parents, as they might be interested to learn what DeMolay can do.
Frat! ~ "Dad" Seth Anthony
Posted by PA DeMolay News and Views at 10:27 AM No comments:

Today's post comes from "Dad" Dan Loughin, of Reading Chapter, who will be assisting "Dad" Panitzke in running the Key Man Conference this year. Check it out and get to know him! 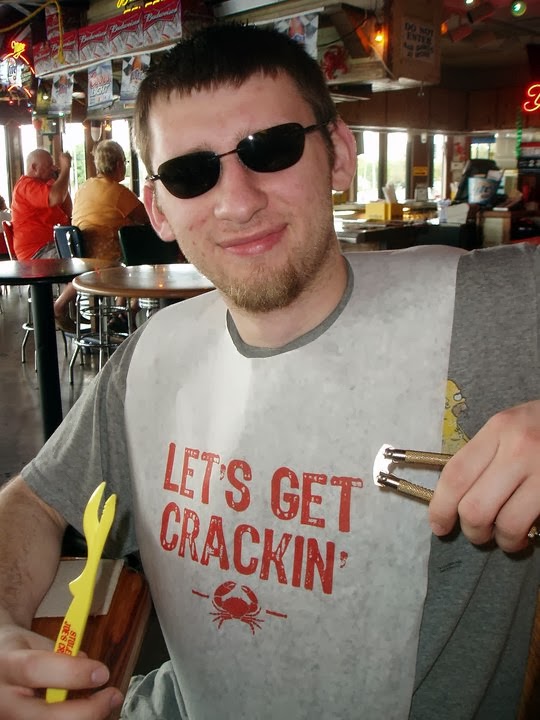 Allow me to introduce myself.  I am “Dad” Loughin, and I am proud to serve as the Assistant Director of the Key Man conference this year.

As some of you know, I have a good history with DeMolay.  I joined Ches-Mont Chapter, which met in Conshohocken, in 1998.  The town is as hard to pronounce as it looks.  I served as Master Councilor of my chapter in 2000.  For the 2001/2002 Convention year, I served as State Junior Councilor.  In 2007, I joined Reading Chapter’s Advisory Council, and in 2010 I started my tenure as Chapter Advisor.  As you can imagine, I have been very busy in the DeMolay world.  I’ve even risked my head for the good of the order (if you want to know about that, ask!)

Even if you’ve been to Key Man before, we want you to come back.  You’ll have a completely different experience than the last time you were here, I guarantee it.  Speaking of the change, you might what know that when I was an active member, we had a completely different conference.  There were 2 tracks, one for new members to DeMolay, and one for Junior and Senior Councilors.  There wasn’t much customization beyond that.  As you can imagine, this is quite the departure.

As DeMolay is for any young many between the ages of 12 and 20, we want any DeMolay between those ages to attend.  We promise that you’ll have a great week, and that your week will be nothing like another attendee’s.

I will be present at many of Pennsylvania’s events, so if you have a question on anything Key Man related, feel free to ask!

“Dad” Loughin
Posted by PA DeMolay News and Views at 9:56 AM No comments:

Today, we take a moment to congratulate and honor one of our own - "Dad" Eric Blew, of Allentown Chapter, who has been nominated to receive the HODEGOS Award from the Grand Lodge of Pennsylvania for the year 2014 on behalf of DeMolay. Administered by the Pennsylvania Masonic Youth Foundation, the HODEGOS Award recognizes truly outstanding adult leaders of the youth programs, and creates further awareness of the Grand Lodge of Pennsylvania’s extensive support of our Masonic Youth. The award takes its name from the Greek word hodegos, meaning “a leader, a guide and an instructor of the inexperienced.”

Rather than just simply tell you about "Dad" Blew's accomplishments, I've decided to take a couple of paragraphs from the nominations letters that came in. Firstly, we have this from another Advisor at Allentown Chapter:

"During Eric’s time as an active DeMolay and officer, Allentown DeMolay thrived, winning many awards, including awards for ritual and Chapter of the Year multiple times. During his time as an advisor, particularly most recently as Chapter Advisor, Allentown DeMolay has thrived again, and once again, it has won many awards, including Chapter of the Year multiple times. 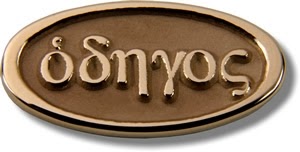 I can say without any hesitation or self-reservation in me whatsoever that Dad Blew is the biggest reason, if not THE reason, for the renaissance of Allentown Chapter, during the past 30 years. To put it simply, when the Chapter faced a decline in both membership and advisors, Dad Blew stepped up and through his relentless commitment of his time, knowledge, contacts, persuasion, persistence, and skill, Allentown Chapter is thriving again.

To put it most bluntly, Allentown Chapter might not exist today were it not for the dedicated efforts and exemplary service of Dad Eric Blew, and I wholeheartedly endorse him and recommend him for the Pennsylvania Masonic Youth Foundation HODEGOS Award."

... and this, from an Active DeMolay that "Dad" Blew has worked with:

"Dad" Blew was crucial in helping me become who I am today. When I shoed interest in rising to Master Councilor, I was met with encouraging words and inspirational messages from him. Giving me tips on to be an effective Junior Councilor and Senior Councilor, suggesting useful ideas for improving communication within our members, and guiding me to being the best Master Councilor I could be, he provided me with every tool I would ever need bot a prosperous as a DeMolay and as a human."
It's obvious that "Dad" Blew has touched many lives with his involvement in the fraternity and we will be pleased to see him receive this prestigious honor at our Convention in July in Reading.