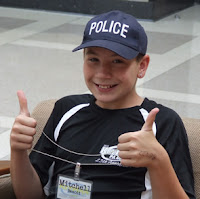 As of Sunday, the 25th annual Key Man Conference began, and the campers started a week long experience that will change their outlook on the DeMolay world.

When the Key Men first arrived they were quickly introduced to the concept of "Reality KMC" and were split up into the conference Chapters. These new Chapters will be their family for the week as they work through the experiences a normal Chapter would have to face. One of the first tasks for the the attendees was to pick a name for their Chapter. Many interesting and clever names emerged after the Chapters turned in their decisions. We now have Dibbs, Les Frères, Thunda Squirrel, The Legit, Wombat, Wolfpack, and Indecisive Chapter. 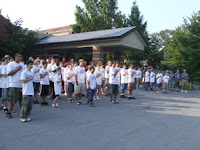 Each Chapter has duties at Key Man that they must carry out as well, such as prayers at breakfast, lunch, and dinner, and the daily raising and lowering of the flags. All the Key Men are adapting to their vigorous Key Man routine of waking up early and working hard. The young men are bettering themselves and becoming leaders in their chapters. Tune in tomorrow for another Key Man update!