Why We Do This: "Dad" Loughin's Story

Dad Pullin recently asked the lot of us Pa DeMolay folk to share our DeMolay journey.  Here’s mine.

Starting at the age of 4, I had been involved in sports in varying degrees. I started by racing quarter midgets (think go kart with a roll cage attached), which I decided to end when I was 9 after the car was damaged nearly beyond repair. When I was 6, I started playing football, and stopped at 13 due to my size. I started playing baseball when I was 11. Our local little league was no different than other little leagues: each year, the coaches held a draft for the 8-12 teams, named after currently MLB teams, and worked with the kids based on their abilities. Some of us pitched, the rest played the field. I wasn’t a half-bad player of the left side of the field – 3B, SS, RF, and CF, and was selected to a few All Star games. Baseball soon turned into my primary activity, no different than a lot of our youth today. 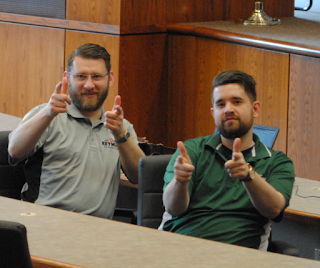 During the 1997 season, when I was 12, I befriended another player on the team named David Slugocki. After having spent many months having conversations about life and what we liked to do for fun, David finally said “Hey, I’m a member of this organization you might like.” Not knowing anything about the Masons at the time (none of my living relatives were Masons, so I thought), I agreed to check it out. We both let our dads know, and my dad got more information from his. Funny enough, my dad knew a lot about Masonic history, as more than half of the men at my church were Masons.

My first experience with DeMolay was a basketball practice in January for the upcoming basketball tournament in March. I kept thinking how awesome it was that some of the older guys were helping the younger ones with basic skills, and weren’t getting flustered as they were trying. I was instantly sold. I received my Initiatory Degree on 3/12/1998, and my DeMolay Degree 15 days later. I was installed as Chaplain a few weeks later. In 2001, I was elected and installed as State Junior Councilor. But after my term, I felt that I had given what was necessary to DeMolay, and decided to step aside for others to lead. Save for 2 sports tournaments, I “retired” from DeMolay in 2003, 2 and a half years before my majority.

My adult career kicked off in 2008. I felt that I had been away from the youth aspect long enough, and felt that my experience with DeMolay as a youth could help the current youth grow as best as possible. That October, I went to Elizabethtown and became Advisor certified.  As my chapter had sadly been closed, I was forced to choose a different one to serve with. I eventually settled on Reading, as several of the Council members at the time influenced my youth when I was an active member. Each year that I renew my Advisorship, I remember the 2 reasons why I keep doing this: youth will always need guidance, and I want to continue to work with the life-long friends that I’ve made throughout my career.

Just like Dad Pullin, I’m going to encourage you all to share your story. Advisor or Youth, I’d love to hear it. If you don’t feel like typing it out, find me one weekend at Patton and tell me. You never know who you’ll inspire with your story.
Posted by PA DeMolay News and Views at 3:14 PM No comments:

Email ThisBlogThis!Share to TwitterShare to FacebookShare to Pinterest
Labels: Advisors, Brotherhood, friendship, Journey, Key Man University, PA DeMolay, Why I joined DeMolay, Why We Do This

Last night, I was at a Masonic Lodge meeting here in Elizabethtown. While getting ready to leave, I witnessed a new candidate and a brother of the Lodge recognize each other from a common ground away from Freemasonry. It made me realize how important the journey really is. It kind of reminded me of how I joined DeMolay. 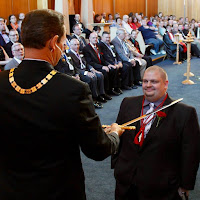 It was 2001 and I was a sophomore at Abraham Lincoln High School in Northeast Philly. My school was doing a benefit concert for the 9/11 tragedies; in fact we were in the choir room when the news broke about the towers. Before the concert started, my mom and I were stopped by my Assistant JV Soccer Coach, Scot Riddell, who was also a parent of one of the members of the team. He started talking to my mom about a lot of different things, one of them being DeMolay. My mom knew about DeMolay since she was in Rainbow when she was a teenager, but she was under the impression that the local Chapter closed. The next closest Chapter was in either Trevose or Jenkintown and we had no means of transportation to make either happen, so she never brought it up. Thanks to "Dad" Riddell, my mom learned that Northeast Chapter still existed. He had his son Joel and another member of DeMolay, my first line signer Rich Schofield, talk to me about DeMolay and encourage me to join. In that conversation, I learned things that I didn't know, including the fact that the Music Teacher and the Art Teacher were both Masons. Rich and Joel told me about all of the fun they had, including the Temple of Doom event at Friendship-Bray that was coming up. The selling point was learning that I could be part of a sports team and actually get some playing time. After thinking it over and talking to my mom, and receiving the sign of approval from my music teacher, Mr. Graham, I decided to join. I'd say that I made the best decision of my life, but I think that would actually be an understatement. I'm not sure what life would look like without DeMolay, but I'm glad I don't have to find out. I received my degrees at the Grand High Priest Class in Elizabethtown, where I met several life-long friends, including "Dad" Alex Swift.

So, why am I sharing this? It's simple. My goal is to get others to share their journeys as well. Maybe you have a memory about DeMolay that you'd like to share with the DeMolay universe. Maybe you'd like to share how you joined DeMolay or the reason you continue to do this. I want to do this on a couple of different levels. The members blog series will be called "DeMolay Spotlight." The Advisor blog series will be called "Why We Do This?" The blog series is open to any member or Advisor from any DeMolay Chapter that would like to share their story. Sweethearts, you can participate as well. Email me at japullin@pademolay.net if you have a submission to this blog series.

Posted by PA DeMolay News and Views at 2:30 PM No comments: 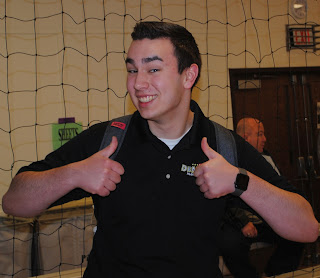 The Following blog post is from Brother Sean Reitze, State Junior Councilor of Pennsylvania DeMolay and PMC of Pilgrim Chapter.

Change: it exists in all of our lives.

I currently attend West Chester University and I am nearing the end of my sophomore year. I entered West Chester as a computer science major and I decided to add some minors since then, which include: Spanish, communication studies, and civic & professional leadership. Even though I wasn’t expecting it to happen, this semester I have decided that I am changing my major to communication studies and keep computer science as a minor. Essentially, this is a flip/flop of my major and minor course of study.

Even as soon as the spring semester of my freshman year, it’s been in the back of my head that maybe computer science isn’t right for me. Yes, I am very interested in technology -- but am I really that interested or passionate about the inner workings of computers, programming, or networks? As time has passed, the answer started to become more clear, but I wasn’t sure what path I wanted to take -- that is, until I attended the annual graduate school fair.

During my visit at the graduate school fair, I visited booths from different universities and asked about their computer science master’s program. Their offerings sounded okay, but nothing particularly stood out to me. On a whim, I decided to visit one of Temple University’s booths for the Klein College of Media and Communication. After listening to their representative and seeing the different programs and opportunities available, the light bulb finally went off: I should look into changing my major to communication studies. It all started to come together and make sense -- I found my Intro to Communication Theory class last semester very meaningful and interesting, I’m passionate about media and production, and enjoy my radio show on WCUR. After graduation, I see myself in those career areas.

After talking with my Advisor and doing some research into the major requirements, I have decided to follow through and change my major to communication studies for next semester. Not only would I be more interested and happier with what I’m studying, but I am also still able to graduate on time! Beyond what the registrar sees on my record, there lies a deeper message within this process: sometimes, change can be nerve-racking and create uncertainty at times. Whether it’s a change of schools, a new job, a move, or changing your major like me, it’s important to keep a positive mindset during the process. Keep that positive mindset the next time you find yourself in a situation where change lies ahead.

Posted by PA DeMolay News and Views at 2:32 PM No comments: