The Key to Success is to Learn from our Failures

The following blog post is from Brother James McKeown, Region H Youth Representative and PMC of Friendship-Bray Chapter.
Failure; it isn’t fun, but it is something that is a part of life. We constantly have to deal with it in school, sports, personal life, and sometimes even in DeMolay. No one’s perfect, which is why I'm sure we've all experienced failure at least once or twice in our lives. People might think it's a way of saying that you didn't succeed, but I see failure as an experience gained. An experience, good or bad, can be used as experiences for your benefit. Quitting is the only true way to fail at something. I’m going to tell you a few stories of failure that happened to me. 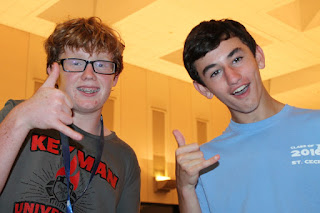 The first story happens over the span of four years. I played basketball for my grade school from 5th grade to 8th grade. Over those four years, I was never on the best team, despite my school having one of the best basketball programs in the Catholic School League. I would always be on the “B” team, due to my lack of skills, but that didn’t stop my team from winning. Every one of those four years, my team would be top three in the league, putting us in good spots for the playoffs. We fought hard each year through the playoffs to make the championship and made it to the big dance all four years! In true Buffalo Bills fashion, we lost the championship four straight years. Looking back at this makes me ask the question, "why?" "Why couldn’t we just win one of those championship games?" "Why couldn’t I step up and do more for my team?" I’m never going to get an answer to these questions. The reason I ask these questions is because they are part of the experience I gained through losing. This experience helped me realize some important things in life. The first thing that comes to mind is that "life is so unfair." We have all heard, or even used this phrase. The only time we think about "life being unfair" is when it smacks us in the face. I truly believe that my team and I never failed. It taught my team and I that winning isn’t everything, that life still goes on after a loss. Losing taught us to keep moving forward and use the loss as motivation to better yourself.

The second story is about a failure that I experienced in DeMolay. It was September 2017, and happened at the Mid Atlantic Tournament of Champions, which we know better as MATOC. During MATOC, I was set to perform the Magnificent Seven. I should have taken a few lessons from the Boy Scouts prepared better.I was not ready to perform the Magnificent Seven and I was going into this competition knowing that it will not be pretty. The lack of confidence showed, because I got 10 out of a possible score of 1000. I almost gave up halfway through the competition. Quite frankly, I never wanted to do ritual again. This experience of failure was hard to come to terms with, but it also taught me a few key lessons in life. It is still teaching me a lesson, which I still am learning to this day, and that is procrastination is bad. I really wasn’t motivated to learn my part for MATOC and that is the main reason why I procrastinated until the final few days to learn my part. Another lesson it taught me is to be confident. Being confident can make a major difference in one's performance. Looking back at this year's MATOC, I am glad I went. Without this experience of failure, I wouldn’t be learning these key lessons that will help me down the path of life. This experience helps me strive to do better in ritual, because now I know the embarrassment of doing poorly while other people are judging you. Will I do better in ritual now? I don’t know the answer to that question. All I know is that I will strive to do better and try to be the best ritualist I can be.

Going into writing this blog post, I wanted to share experiences to help combat failure, but I realized that combating failure just comes naturally. We need failures in order to succeed. We need to know the bitterness taste of defeat before tasting the sweetness of victory. I’m glad I got to experience failure, because I can now use these experiences as motivation to better myself. The only way you don’t succeed is when you decide you've given up. Just because you failed at a task, doesn't make you a failure. Learn from these experiences, and I promise you that you will succeed.

Posted by PA DeMolay News and Views at 3:36 PM No comments: 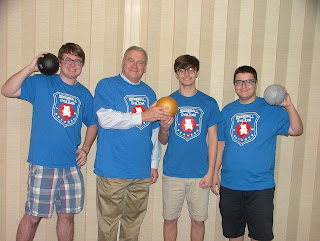 “Dad” David A. Glattly, Sovereign Grand Commander of the Ancient Accepted Scottish Rite of the Northern Masonic Jurisdiction , joins the leaders of Elizabethtown Chapter, Order of DeMolay, in encouraging DeMolays, Master Masons, Scottish Rite Masons, and everyone to form a team and register for the 4th Annual Dodgeball for Dyslexia Tournament, proceeds benefiting the Children’s Dyslexia Centers.

Dodgeball for Dyslexia is a dodgeball tournament that has been driven for the purposes of raising as much money as possible for the Children’s Dyslexia Centers, the State Charity for Pennsylvania DeMolay. Dodgeball for Dyslexia was founded by Brother Evan Crawford of Elizabethtown Chapter, who has now passed the duties of planning this tournament to me, Kody Anderson, a 2017 Past Master Councilor of Elizabethtown Chapter.

Save the date: Dodgeball for Dyslexia will be held on May 12, 2018. The tournament will be held at the Spooky Nook Sports complex in Manheim, PA.

2018 will be the fourth consecutive year for this tournament. In 2017, we raised over $3,000 for the Dyslexia Centers, and we plan to raise even more for 2018! Each and every year, the Dodgeball for Dyslexia tournament has been increasing in participation, with teams coming from all over Pennsylvania and even Virginia. We had 13 teams in 2017, which consisted of many DeMolay chapters and even members from various Masonic Bodies.

We invite anyone who is willing to play dodgeball to make a team and help support and raise money for the Dyslexia Centers. All the money that is donated by teams will go to the Dyslexia Center nearest to them, so grab six to ten of your best players and come out to raise money, and have fun while doing it!  The overall winning team will take home the coveted Gold Dodgeball and have their name engraved on the trophy stand. The team that raises the most money for the Dyslexia Centers will win the Silver Dodgeball; and the team showing the most spirit will be awarded the Bronze Dodgeball.

Remember: Making a team makes a difference, so come out and play dodgeball to raise money all for a great cause!
Posted by PA DeMolay News and Views at 10:38 AM No comments: 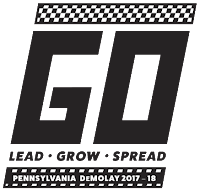 We're a little over a week into the new year, but there's always time for reflection on the year that has past. Pit Stop for Leadership Weekend will be the start of the 2018 PA DeMolay programming, but lets take time to remember what we did in 2017.

10. Dodgeball for Dyslexia has grown to be bigger than ever. This year's event, hosted by Elizabethtown Chapter, held 14 teams competing in a friendly tournament for a great cause. Roughly $2,000 was donated to various Children's Dyslexia Centers across Pennsylvania.

8. The Aliens beat the Cowboys at the Cowboys vs. Aliens Weekend. Several competitions, from trivia to Nerf battles, were held to determine which team was stronger. After the friendly competition, everyone in attendance played Laser Tag at the Laser Dome.

5. PA DeMolay is on the GO! During the PA DeMolay Convention, newly elected State Master Councilor Jacob Beers introduced his new theme for the year which is centered around racing. It also introduces three important phases: GO GROW, GO LEAD, and GO SPREAD.

2. The first ever PA DeMolay draft during Talladega Nights Weekend. The weekend was the long awaited return of Flag Football. This time, the teams were decided with a draft held on Friday night. Unlike the Super Bowl earlier in the year, the Falcons beat the Patriots in the Williamson Bowl.

1. The Distinguished Service Award was applied for and awarded for the first time in 4 years. At the Supreme Tall Cedars Class in December, Executive Officer "Dad" Greg Schaeffer acknowledged two young men as the DSA recipients, Brother Alex Spence from Elizabethtown Chapter and Brother Brandon Whited of Northeast Chapter. Brandon was also informed that he would be entered for a chance at the DeMolay International DSA. Congratulations to both young men.

So there you have it. Some very memorable things took place in 2017. What will 2018 bring? Well, you'll have to stay tuned to find out.

Posted by PA DeMolay News and Views at 2:15 PM No comments:

New Year, New Me: Tips to Follow Through on your New Year’s Resolution

The following blog post is from Brother Sean Reitze, State Junior Councilor for Pennsylvania DeMolay and PMC of Pilgrim Chapter.

Before we get things started: Happy New Year Pennsylvania DeMolay! I wish everyone a happy and healthy 2018.

At the start of each year, many of us find ourselves wanting to take on a New Year’s Resolution. A large majority of individuals end up breaking their resolution at some point during the year: hopefully these tips can help us all be a part of the proud 8% of Americans who have achieved their New Year’s Resolutions (according to Forbes).

Set goals. Make your resolution a tangible, specific, and attainable goal. If you find out along the way that your goal isn’t attainable, don’t be afraid to modify it slightly in order to make it possible.

Partner up with a friend to positively motivate each other to achieve your resolutions. You’ll be able to check in with each other along your journey and have a go-to person if you encounter any bumps along the road.

I hope these tips lead you in the right direction towards achieving your New Year’s Resolution. Good luck, and have a great year Pennsylvania DeMolay!
Posted by PA DeMolay News and Views at 12:01 PM No comments: