This or That: Batman vs. Superman

Pennsylvania DeMolay's State Sweetheart, Miss Sarah Sellers, has put together a program that puts two forms of pop culture reference in a competition against one another. This competition is to help raise money for the Children's Dyslexia Centers, which is PA DeMolay's State Charity. The current competition is a question that is often asked: Batman vs. Superman. 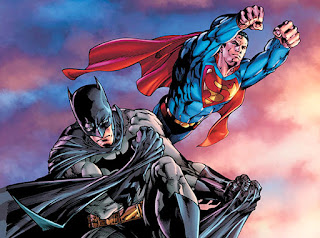 Every fan of comic books has been asked the very same question throughout their life: Who would win in a fight between Batman and Superman? Later this month we may get closer to that answer with the release of “Batman V Superman: Dawn of Justice,” but for now we are asked which one we prefer more than the other. The Dark Knight and the Man of Steel have been permanent fixtures on the world of pop culture with continuous reboots, remakes and reinterpretations. Both have had multiple film series, television shows, animated series and video games made in their tribute.

Batman, known to all of Gotham City as billionaire playboy Bruce Wayne, became the owner of his father’s company, Wayne Enterprises, after both of his parents were killed. At a young age, Bruce left Gotham City to learn the skills it took to protect the city of crime. He studied forensics, criminal psychology and also learned martial arts along the way. The world of the Dark Knight has been around for years in multiple ways. From the Batman TV series featuring Adam West, to the more recent film series featuring Christian Bale, Batman has been portrayed by 8 different people on the big screen. Currently, Ben Affleck will portray Batman in the upcoming Batman V Superman film, while the series “Gotham,” an origin story that follows Officer Jim Gordon and a young Bruce Wayne, airs on FOX television.

Superman, originally known as Kal-El, was sent to Earth by his parents to protect him from the destruction of his home planet, Krypton. On Earth, he finds the Kent family and is known to them as Clark Kent. Clark learned that he has superhuman powers, including strength, speed and flying abilities. Clark becomes a journalist for the Metropolis Newspaper, the Daily Planet, while saving the world as Superman. Like Batman, Superman has been around the world of pop culture in multiple ways. The most notable version of Superman would be the 4 part series starring Christopher Reeve in the title role. An origin story, entitled Smallville, explained the youthful side of Clark Kent before ultimately becoming Superman. In the film coming out later this month, Henry Cavill will portray the Man of Steel. 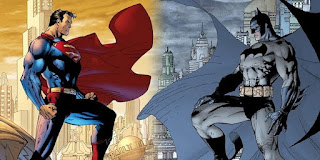 So, which one is your favorite superhero: The Caped Crusader or the Man of Steel?

Your chapter has until April 1st to make a decision between Batman or Superman.

Posted by PA DeMolay News and Views at 2:14 PM No comments:

Email ThisBlogThis!Share to TwitterShare to FacebookShare to Pinterest
Labels: Batman, Charity, Dyslexia Centers, State Officers, Superman, Sweethearts, This Or That

The Honor Apron Quest Begins: A Tale of Three Entries 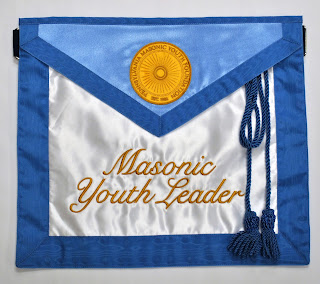 Pennsylvania DeMolay is pleased to announce that the first three entries have been made into the special drawing for the Past Grand Master Honor Apron!  This special Masonic Youth Apron has been signed by all living R.W. Past Grand Masters of the Grand Lodge of Pennsylvania and will be presented to one lucky Pennsylvania Mason later this summer.

Following a presentation on Elizabethtown Chapter, Order of DeMolay, at the January 8th District 1 Lodge Officers’ Meeting, Jason Lewis, Secretary for Lodge No. 43 that meets in Lancaster, took the information on DeMolay to his 12 year old nephew, and this was just the beginning of a whirlwind month for Jason and his nephew, Noah!  Jason’s application for the Past Grand Master’s Apron included Noah and two other young men from the Lancaster area.

Noah attended a laser tag prospect party that was hosted by Elizabethtown Chapter, and – having had a great time – decided to join DeMolay.  He was inducted into DeMolay at the Regional Patriots Class in Reading on February 13th, the same day as Uncle Jason took the DeMolay Advisor Training and submitted the paperwork to become an advisor for Elizabethtown Chapter.

Okay, let’s do the math: Master Mason Jason submitted the Apron Application listing the contact information for three young men of DeMolay age and eligibility.  That’s worth one entry into the special drawing that will be held on June 1st.  One of the recommended young men joined DeMolay, giving Jason a second entry into the drawing, followed closely by a third entry because he became an Advisor for Elizabethtown Chapter.  The next step, for as many of two additional entries, is to get one or both of the other recommended young men to join DeMolay. 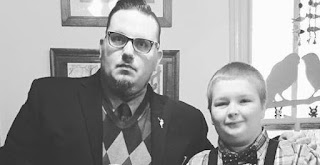 Pennsylvania DeMolay congratulates “Dad” Lewis on earning the first three entries into the Past Grand Master Honor Apron drawing, and on becoming a DeMolay Advisor; and we congratulate Noah on becoming a member of Elizabethtown Chapter!

This article was written by "Dad" Dave Berry. Thank you "Dad" Berry for your contribution.
Posted by PA DeMolay News and Views at 11:15 AM 1 comment:

Be Proud of DeMolay! 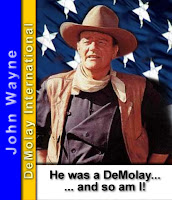 Since March is less than a month away, now is the best time to decide what your chapter will do for DeMolay Month. DeMolay Month is an entire month of celebrating the fun and exciting things that DeMolay has to offer. In Pennsylvania there is also a DeMolay Month Competition with awards presented at Convention to the top 3 chapters with the most points during the month.

So, what are some good ways to celebrate DeMolay Month? I put together a short list of ideas that your chapter may want to consider in order to make it the best DeMolay Month ever.


March is almost here, so plan the month now before it’s too late. Look at the DeMolay Month checklist to see all of the ways your chapter can earn points. Good luck to all chapters, and may the odds be ever in your favor.

Until next time – “Dad” Joe Pullin
Posted by PA DeMolay News and Views at 1:39 PM No comments: 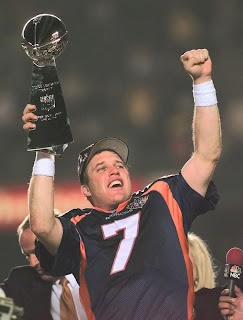 Super Bowl 50 is right around the corner, and what better way to celebrate than to acknowledge the former football stars that were, or currently are, members of our great fraternity. Today we highlight John Elway. Now I know what your thinking, and NO, John Elway was not a member of DeMolay. He is however a Mason.

John Albert Elway was born June 28th, 1960 in Port Angeles, Washington. John's father, Jack Elway, was a football coach for Port Angeles High School. Some would say that football was always in John's blood. As John's family moved a lot because of his Dad's work, John started High School at Pullman High School in Pullman, Washington, but would finish his final three years at Granada Hills High School in San Fernando Valley, California. As a senior, Elway would be named to Parade Magazine's All America High School Team.

Elway went to college at Stanford, where he played both football and baseball. He would go on to win two Pac-10 Player of the Year Awards, become a consensus All American, and finish second on the Heisman Trophy ballot. He was drafted by the New York Yankees to play right field in 1981, but chose to stick with football. In 1983, John Elway was drafted by the Baltimore Colts with the 1st overall pick. Elway, who refused to play for the Baltimore Colts due to his father's persuasion, used baseball in order to leverage a trade. The Colts would later trade Elway to the Denver Broncos, the place Elway would spend his entire NFL career.

Elway would later become the Executive Vice President of football operations for the Denver Broncos, a role he currently holds to this day. John Elway's Denver Broncos, led by Quarterback Peyton Manning, will take on the Carolina Panthers, led by Quarterback
Cam Newton, this Sunday at Super Bowl 50. So when did John find the time to join a Masonic lodge? John Elway would become a mason after his playing career was over, joining South Denver Lodge No. 93 at a Grand Lodge of Colorado two day class February 22 and 23, 2002. Although there is no evidence to how active he is within his local lodge due to time scheduling, Elway is a brother of our great Masonic fraternity, which earns him a spot in our Gridiron Gang.
Posted by PA DeMolay News and Views at 2:36 PM No comments:

With Super Bowl 50 taking place in a little over a week, I figured this is a good time to acknowledge the former football stars that were, or currently are, part of our Masonic Family. We start with a former member of the Order of DeMolay, legendary Quarterback Fran Tarkenton. 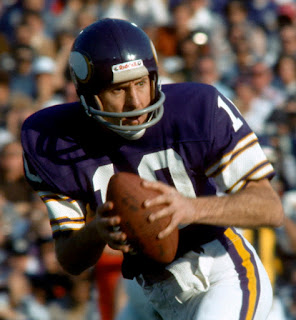 Francis Asbury Tarkenton, who later shortened the name to Fran, was born on February 3rd, 1940 in Richmond, Virginia. He became the star Quarterback for Athens High School, where he led the team to a state championship in 1955. It was during his time in high school that Tarkenton found DeMolay, joining Frank Hardeman Chapter from Athens, Georgia in 1954. He attended the University of Georgia, where he led the Bulldogs to the Southeast Conference Championship and to the Orange Bowl. He became an All-American athlete for the Georgia Bulldogs.

In 1961, Tarkenton was drafted in the third round of the NFL Draft by the Minnesota Vikings. In his first NFL game, Tarkenton threw 4 touchdowns, an accomplishment that had not been repeated until this past year when Marcus Mariota of the Tennessee Titans made the same accomplishment. Tarkenton became known as a mobile Quarterback, often referred to as “The Mad Scrambler” or “Frantic Fran.” In 1968, after playing his first 6 seasons for the Minnesota Vikings, he was traded to the New York Giants. In 1972, which would prove to be the prime of his career, Tarkenton was traded back to the Minnesota Vikings. From here, Tarkenton would lead the Vikings to 3 Super Bowls in 4 years, unfortunately missing out on all three tries. Tarkenton was named the League MVP in 1975 and was selected a total of 9 times to the Pro Bowl team. Tarkenton became a Pro Football Hall of Famer in 1986.

After his playing days were over, Tarkenton became a very well-known business man. Tarkenton has started twelve businesses, including a multi-million dollar computer software company that he sold in 1994. He also became known as a motivational speaker and an author, writing the books “What Losing Taught Me about Winning,” and “How to Motivate People: The Team Strategy for Success.” 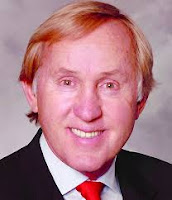 “It is a great honor to be inducted into the DeMolay Hall of Fame. In today’s society where there is so much violence and heartache, it’s a gratifying feeling to know there is such a fine organization as DeMolay to look up to and lean on for guidance and support. I am proud to be a member!”

Be proud of who you are, both as a person and as a DeMolay.


Until next time – “Dad” Joe Pullin
Posted by PA DeMolay News and Views at 3:32 PM No comments: