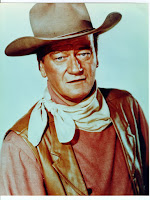 “Courage is being scared to death… and saddling up anyway.” No quote better encapsulates the "true tough as irons with a heart soft as leather nature" of “The Duke.” Born Marion Robert Morrison, the future American actor would go on to be the most recognized name in all of the western genre of film. However, before all of that, John Wayne, then known as “Little Duke” because of the massive Airedale Terrier that he always had with him which was also named Duke, was a brother in the Order of DeMolay.
After his high school years, Wayne went to the University of Southern California on a football scholarship to major in Pre-Law. While there, he engaged deeply in his studies and became a member of the Sigma Chi greek fraternity. Unfortunately, Wayne lost his scholarship due to a bodysurfing accident and was forced to return home to Southern California, unable to pay the hefty price of college tuition.
While at the time this seemed devastating to the young star-to-be, it was in fact a miracle. While working odds and ends in the acting industry, he was cast for the lead role in The Big Trail (1930), one of the first big budget films in the greatest decade in film history. It was here that he got his stage name “John Wayne.” His success on the big screen began to climb, and before long he was starring in his immortal pictures such as The Searchers (1956), True Grit (1969), The Quiet Man (1952), and The Alamo (1960).
John Wayne’s story of success is one for the history books, but it is all the more meaningful to us, his brothers. So when you hit some troubles down the road, remember to be like John Wayne; "I'm not the sort to back away from a fight. I don't believe in shrinking from anything. It's not my speed; I'm a guy who meets adversities head on."
This edition of the blog has been provided by PA DeMolay State Treasurer Daniel Shevalier. Thank you Daniel for your contribution.
Posted by PA DeMolay News and Views at 10:09 AM No comments:

Survey Says: How to Improve the PA DeMolay Product

A few weeks ago, I put together a survey to try to get an idea of the areas in which we can improve the overall PA DeMolay product. I'm happy to say that we had 58 members and advisors take the time to fill out this survey. Here are a few of the things that I have learned throughout the survey:


In terms of bringing back a PA DeMolay activity:


In terms of the squire program (a program designed for 9 to 11 year old boys prepping them for DeMolay):


Thank you to everyone who helped out by voicing their opinions on the matter. Here at the PA DeMolay office, we take all recommendations into consideration in order to make this a well rounded product for members and advisors. We have already worked on improving some of these requests, and look forward to making more in the near future.

Until next time - "Dad" Joe Pullin
Posted by PA DeMolay News and Views at 1:27 PM No comments: