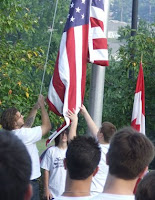 After the previous days of rain, the cooler weather was like a gift for most of the attendees. With the rain came a special day for everyone here at Patton campus. A special atmosphere was added to the day’s events as we worked through Thursday. With only a slight trickle of rain, “Legit” Chapter raised our nation’s flag and presented the Canadian banner. 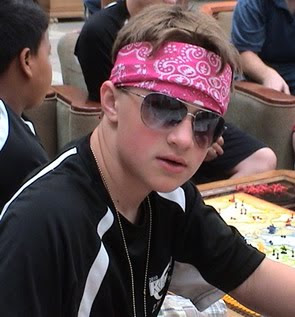 After a delicious breakfast, the Key Men moved on to the breakout sessions. One of the session’s, “Life as a JO”, looks into what is expected from a JO (Jurisdictional Officer), and what it involves. Trey James, a member of “Dibbs” Chapter, commented on the information presented, saying “I didn’t know some of the things JO’s did.” They then moved onto selectives, were the Key Men could choose between "What Makes a Leader," "How to Effectively Recruit Members (or, Get Off Your Butts and Bring Your Friends Into DeMolay!)," and the workshop Trey chose, "The Arrrrrrrrrrrrrt of Cooperation In Your Chapters." 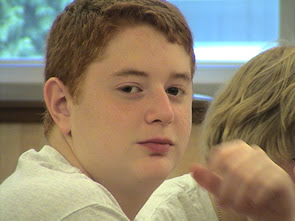 In this workshop, “Dad” Anthony started of with a quirky character, and led the program as a pirate. Everyone in the workshop was on a sinking ship, and needed to choose an island to go to. All the Key Men received cards that gave them hints on to which of the islands was the best. However, the cards included some secret missions that turned people against each other. At the end, everyone learned a lesson on how to work with different people (pirates) and different view points, and still maintain a focus on their objective. 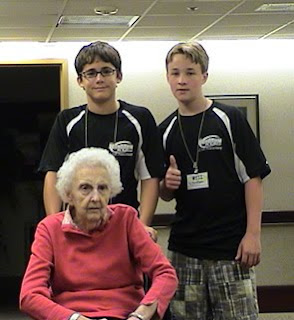 Lunch was next, and after some delicious subs, it was time to begin the Masonic Village Service Project. The Masonic Village houses many residents who have retired and enjoy spending their time relaxing. Today was different for the residents as the DeMolays had a choice to go visit a resident or aid the staff with a wheel chair square dance. To begin, all the participants were helped to the lower level where the dance was being held. The Key Men then split up into their groups. The visiting group made some new friends. Trey James met the one of the oldest living Masons in Pennsylvania, Thomas J Bell, who at the young age of 94, told him about his various experiences and a few tips on life. He also just received his “70 year member” pin which he showed Trey. Trey says “when I’m that old I hope I can tell as many stories as I have heard and still be able to walk around”. The square dancing group had fun playing around, being led by a great caller. David Gerstenfeld summed it up pretty well when he gave his opinion of his favorite thing from the Village; “The square dancing with the patients, I liked how happy we were able to make them.” 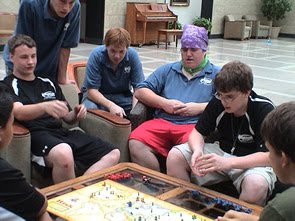 Although the daily sport competitions were cancelled due to rain, it didn’t bother most as it allowed them time to play their own games. Examples include Phil Sisco’s game of “Risk” and Lukas Conrad’s big game of dodge ball. A great day was ended with a great snack, and everyone enjoyed some super cheesy nachos. We only have one full day left in this awesome conference, and even though we will enjoy the break from work at the end, we will undoubtedly miss great days like this!