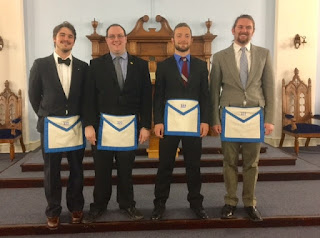 The Order of DeMolay, along with all other Masonic Youth Groups, is sponsored by the Free and Accepted Masons. One common misconception is that all DeMolay members become Masons. Although this can, and often times is the case, it is not a forgone conclusion that a member of DeMolay will one day become a Mason. Although DeMolay is sponsored by the Freemasons, the two are separate organizations. Having seen many friends and brothers join the Masonic lodge, I can say that it is a special occasion when they are raised to the sublime degree of a Master Mason.

DeMolay and Freemasonry have the same principals and focus, which can make it easy for people to consider DeMolay members to be "junior masons." They both take pride in serving the community through fellowship and service. Both Orders believe in a fraternal practice, creating brothers among men. DeMolay's purpose is to help young men to become better citizens and leaders, while Freemasonry helps good men to be better men and leaders. The comparisons clearly show why DeMolay members often times grow into great Masonic leaders.

When I was 19, I became a Mason of Frankford Lodge #292 in Philadelphia. The best part of joining, aside from instantly being welcomed by every member of the lodge, was to see all the DeMolay Advisors and fellow members, who are also Masons, support me through the journey. A few of them even took part in the degrees, with my Ritual Advisor serving as my guide. I look around today and see that this still occurs. Past State Senior Councilor, Anthony Trento of Chester Pike Chapter, became a Mason earlier this month. In attendance were three of his DeMolay brothers, two of which he served with as a State Officer. As DeMolay and Freemasonry show throughout their practices, and this post confirms, once a brother, always a brother.

Until next time - "Dad" Joe Pullin
Posted by PA DeMolay News and Views at 12:19 PM No comments:

I Promise, Covenant, and Vow 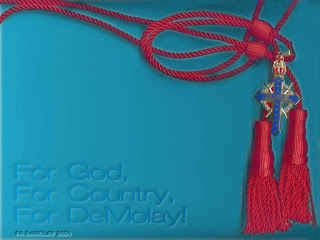 The Order of DeMolay was founded on the basis of the heroic fidelity of Jacques DeMolay. As we all know the story. DeMolay was the last Grand Master of the Knights Templar. He and his principles officers were arrested for various charges, including heresy towards the church. The officers were forced to give up the names of the members that escaped arrest and to hand over their wealth. Jacques DeMolay refused to betray his comrades, no matter the punishment. Despite the torture, DeMolay held true to his word. He was burned at the stake on March 18th, 1314.

As Legionnaires, we took an oath to hold this date close to our hearts. We are expected to observe March 18th of every year as a memorial to Jacques DeMolay with our fellow comrades that have received the Legion of Honor with us. This is the first year that I am observing the Legion of Honor Observance, as I recently received my Legion last July. I'm no stranger to annual observances however, as I helped with the founding of our Chevalier Court in Philadelphia. The best part of my observance this year, is that I will be celebrating it at Patton Campus in Elizabethtown with the young men that make this organization as great as it is today. I will also celebrate this observance locally with William J. McCulley Preceptory next week at their annual observance.

Thank you Jacques DeMolay, for allowing us to emulate your heroic example. Thank you Frank S. Land, for founding this great youth organization and naming it after such a heroic martyr. To all of my fellow Legionnaires all over the world, I hope you have a great Legion of Honor Observance.

Until next time -"Dad" Joe Pullin
Posted by PA DeMolay News and Views at 1:20 PM No comments:

Films Every DeMolay Should See: Monty Python and the Holy Grail 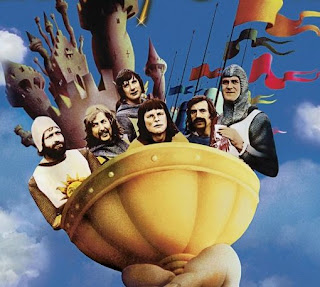 Over the history of Pennsylvania DeMolay, one of the most popular films utilized in the planning of programs and events has been Monty Python and the Holy Grail. Even though this is a popular film, I've still heard plenty of people, DeMolay's and Advisors, say that they have not seen it. I'll be honest, DeMolay is the reason I've seen this movie in the first place, as we used this movie for a membership theme when I was a State Officer and I thought it important to see the movie in order to push the theme. The main reason this movie is on the list is due to the upcoming Movie Mashup Weekend: Quest for the Holy Grail.

The film is a comedy spoof that follows the journey of King Arthur and his quest for the holy grail. To set forth on his journey, King Arthur recruits knights to fill out the famous "Knights of the Round Table," and assist him on his quest. Arthur's knights include Sir Lancelot the Brave, Sir Bedevere the Wise, Sir Galahad the Pure, and Sir Robin the Not-Quite-So-Brave-As-Sir-Lancelot. The film follows the knights on their journey with lots of humor, adventure and several one-liners (if you don't believe me, refer to the March issue of the Keystone Crusader.)

So what makes this a film that every DeMolay should watch? Well, it tends to come up a lot in the program planning of our events, especially in Pennsylvania. Currently, the Movie Mashup Weekend, which will take place this weekend at Patton Campus, will center around the film. Participants will go on their own quest, with their own knights of the round table (well, maybe not a round table,) and partake in numerous puzzles, riddles and tasks along the way. Aside from this event, PA DeMolay once held a membership theme based on the film called "The Quest!" During the year, members of the State Officer team dressed up as knights and performed skits of their quest. If you haven't seen the movie, participants who have already registered for Movie Mashup Weekend will get the chance to see it during the weekend. We look forward to yet another fantastic event.

Posted by PA DeMolay News and Views at 2:07 PM No comments:

This past weekend. I had the chance to join our Executive Officer, Thomas R. Labagh, on a trip to the DeMolay International EO Conference, held in New Orleans, Louisiana. When I was first asked to go, I was excited. Yes, New Orleans has always been one of the cities I've wanted to visit, but I also knew that I would be representing PA DeMolay. It was a great feeling to introduce myself as a member of staff in Pennsylvania, and explain some of the programs that we have going on, such as the Bro-Ties, the "DeMolay Goes Hollywood" program, and our new PA DeMolay Advisor Training Seminar.

I had the chance to meet Executive Officers from across the country, and one who traveled from over seas in Germany. DeMolay is known for its fellowship and brotherhood, so its a nice surprise to see the same fellowship and brotherhood within a group of Executive Officers and staff members. I only knew a total of 6 people before the conference started, and got to know several more before it ended. Since most of the meetings were brainstorming sessions, it was great to hear what other jurisdictions are doing and receive ideas to implement here in Pennsylvania. 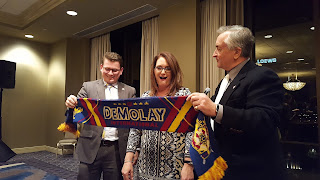 Two guest speakers were asked to address the conference. The first was Mr. Herbert Marks Sr., who is the oldest living Senior DeMolay at 103 years of young. He spoke of his experiences through DeMolay and what it taught him through his life. He also mentioned that he had the chance to meet "Dad" Land. It was inspiring to hear that DeMolay has had the same effect on young men for all these years. The second speaker was Mrs. Jessica Vermilyea, the Director of Disaster Relief for Upbring Disaster Response. She informed us of the recent floods, tornadoes and storms that have left people without homes in the state of Louisiana. Her company focuses on helping aid those in need. It was enlightening to hear stories from someone that looks out for the greater good of others, because that's the same message we try to instill in our youth.

The conference was great, and so was the city of New Orleans. The food was fantastic. If you're into seafood, which unfortunately I am not, then there is no better place to go than New Orleans. The culture was fascinating, especially hearing band music playing right outside of our hotel during the conference dinner. Jazz music was playing everywhere we went, including a three man singing group singing while we were having dinner at a steakhouse. Yes, I did get to Bourbon Street, and all I'll say is that I had a great time with great people. New Orleans is a very historical place, and I hope I get the chance to go back someday.

Posted by PA DeMolay News and Views at 11:34 AM No comments: