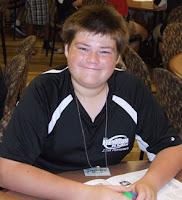 Key Man is on its third day, and we’ve already learned so much. The Key Men are adjusting to life on Patton Campus, fitting in what sleep they can between all of the fun.

Workshops are always a crucial part of the learning experience at state events and we have already participated in many, with the most recent one being about how to plan a functional prospect party, that can promote the order, and be tons of fun. 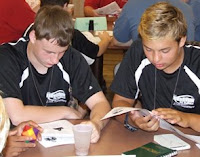 The Chapters are participating in the daily sports tournaments and are having a great time rotating between Dodgeball, Volleyball, Ultimate Frisbee, and Kickball. For sports today, we learned Zach Pilarcik has a strong throwing arm and Alex Spence and Liam Baker are amazing at Dodgeball.

As most of you know the Key Man Conference has been around for twenty-five years and over those years young men have been coming to Patton Campus to expand their DeMolay knowledge. Now we have a new generation of young men here at Key Man, like Rex Collins and Dominic Bruno. Both young men are thirteen and from Westmoreland Chapter here in Pennsylvania. Even though they are both from the same home Chapter, at Key Man Rex is in Legit Chapter and Dom is in Dibbs Chapter. Rex says that he expected Key Man to be a kind of “Crash Course” in DeMolay and did not think Key Man would be as much fun as it actually is. Dom says he wanted to go to Key Man to meet new people and make new friends. 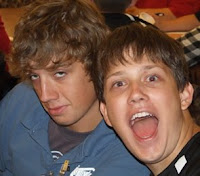 So far between the two of them they have consumed eight glasses of Strawberry/Banana/Kiwi juice, twelve glasses of chocolate milk and two cappuccinos. If you think that’s a lot then you will be really surprised by Miguel Mendoza-Andrade of Legit Chapter, he has drank a whopping seventeen glasses of Chocolate Milk; good thing he has lots of activities to work it off!

Keep logging in each day for more Key Man updates!