Communication: Why Do We Talk About it So Much?

The following blog post is from Brother Sean Reitze, State Junior Councilor for Pennsylvania DeMolay and a PMC of Pilgrim Chapter. 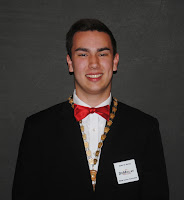 Communication is something we all experience in everyday life. We often hear about its importance during Stated Meetings, Advisory Council meetings, and other areas of DeMolay. Why is it spoken of so much at DeMolay events? I hope that throughout the course of this blog post, and with my insight as a communication studies minor, I can help you understand why communication is so important — not just in DeMolay, but in life as well.

One of the major facets of DeMolay involves event planning. Imagine yourself as the chairman of a committee that is planning a regional dance for your local Chapters, Assemblies, and Bethels in the area. You tell your committee in advance that you want music, decorations, and refreshments for the dance. Fast forward to the night before the event: the “music” for the event is just a member’s laptop speakers, “decorations” include a few balloons, and the “refreshments” consist of a half-gallon of fruit punch (without cups nonetheless!) This is definitely not what you had in mind for your event!

While this example might seem a little extreme, let me offer an opportunity for improvement and illustrate one of the key concepts of communication theory. Right off the bat, the chairman should have met with the members of the committee a few times before the dance and should have been more specific with his requests. Moving past this part of the solution, let’s take a deeper look at where and how this miscommunication occurred.

The committee members were only told by the chairman that they need to secure music, decorations, and refreshments. While the committee members technically weren’t wrong in completing what they were tasked with, it is certainly not what the chairman had in mind. To look at this more closely, we are going to look at the Allowable Range of References, or an acceptable list of words that you could think of when someone says something. When the chairman said “music,” what was he really saying? On one side of the range you have the laptop speakers, while on the other end of the range you have a DJ with professional speakers (which is what the chairman had in mind). Bypassing occurred when the communicators (in this case, the committee members) chose different spots on the Allowable Range of References. This concept can be applied again with the decorations and refreshments.

From looking at this example, you can see that there are many aspects of communication we don’t actively think about. Miscommunication can happen very easily, but it can also be easily avoided by being specific with what you are trying to promote or convey. Keep the Allowable Range of References in mind if you find yourself planning an event, working on a committee, or involved in other aspects of DeMolay. This is one of many examples of communication theory I have learned so far, and I hope to share more with you as time goes on. Like the motto of KeyMan University says: Ancora Imparo!
Posted by PA DeMolay News and Views at 2:38 PM No comments:

Why Do We Do Ritual? 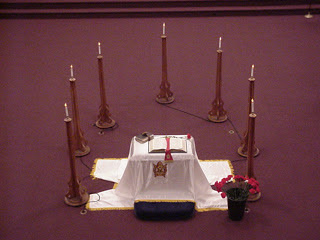 One of the things that sets DeMolay apart from other youth organizations is our ability to perform Ritual. When the term "Ritual" is used, it's usually referred to in a negative sense. The definition of Ritual is "an established or prescribed procedure." When DeMolay performs Ritual, it's used as a prescribed way of expressing the beliefs of our organization and the things we stand for. It expresses our belief in the 7 cardinal virtues of the order, our appreciation towards our country and all those who have served for our freedom, and our respect for the public school system, among several other things. Each piece of Ritual is a lesson that is used to educate members of DeMolay as well as others.

At a young age, young men and women have choices to join activities, such as sports and theater, that allow our youth to share their talents with an audience. The way Ritual is performed by our DeMolays is no different from those activities. The young men of DeMolay take pride in the way they perform each ritual part. They want the viewers to leave satisfied with the way they present the work. The young men make sure that the movement looks good, the words flow properly, and that they look professional in the presentation of the work. It takes effort and practice to make sure that it's performed right, the same way that athletes attend practice and actors hold rehearsals.

As a Senior DeMolay, I enjoy seeing the Ritual performed to such a high quality that the members  are capable of performing it. It reminds me of the days that I put the same effort into those parts. Recently in Pennsylvania, the Mid-Atlantic Tournament of Champions was held in Gettysburg, a DeMolay Ritual Tournament in which members perform their parts competing against the best of the best in the Mid-Atlantic Region. It was encouraging to see the young men perform the Ritual of our work to the level that they did. It shows that we really do have something special with the organization of DeMolay.