A Key Man Set of Degrees

"An amazing job" was the quote I heard about the Initiatory Degree that brought five (5) new members into PA DeMolay tonight! The Preceptors were outstanding and Anthony Kallhoff was an excellent Master Councilor.

Tonight's DeMolay Degree was outstanding, and presented a degree with new ideas on a 91 year old theme. Staged in a real chapel, the setting was very much like where the trials of DeMolay and the Templars might have been held. 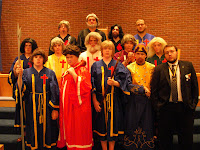 Upon arrival at the chapel, each member of the audience was given a "summons" to attend the trail, and a printed list of all the charges against the Templars. Fifteen members of the audience were dressed in Inquisitor costumes, and sat dispersed among the crowd. When DeMolay was taken to the rack, these "extra Inquisitors" rose in applause of the action taken by the Junior Inquisitor.

The cast members had rehearsed all week for this performance, and although some of the rehearsals had me shaking my head and wondering what they were paying attention to, they came through in the end and delivered a performance of which they could all be proud!

When asked their favorite moments, the Key Men had differing opinions. Some liked the costuming and makeup. Others liked the creepy music from some movie soundtracks. Some thought the visual lighting and sound effects were remarkable, and others just marveled at the acting ability of Bro. Ryan Davis as Orator (the finest Orator I have EVER seen or heard in my 40 years of DeMolay experience!) Still others enjoyed the surprised look on Jacques DeMolay when a cup of water was thrown in his face! Others liked the tolling bell, signaling a death as they exited the chapel.

Of course, we can't post the video here, but these photos should give you an idea of the special make-up they had to endure for the sake of "realism." 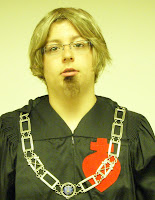 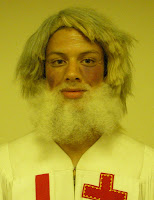