The following story is told by Past State Scribe, Bro. Aaron Muldowney. 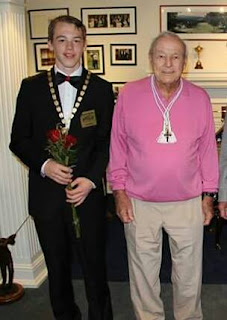 Pennsylvania DeMolay has had many recipients of the DeMolay Legion of Honor, but perhaps the most famous of them all is legendary golfer, Arnold Palmer. I had the privilege of being part of the team of DeMolays who helped confer this honor to Mr. Palmer at his home office in Latrobe, PA on September 24, 2015.

Arnold Palmer won 92 professional tournaments, 62 of which are PGA Tour wins (fifth most all-time), won seven PGA Tour Majors, is a two-time PGA Player of the Year, co-founder of the Golf Channel, recipient of the PGA Tour Lifetime Achievement Award, a member of the World Golf Hall of Fame, and recipient of both the Presidential Medal of Freedom and Congressional Gold Medal. Mr. Palmer was a longtime supporter of Westmoreland Chapter and other youth programs of the 30th Masonic District.

We arrived at Mr. Palmer’s home office and were warmly welcomed inside. The lobby of the office housed many of Arnold’s accomplishments, including trophy replicas of PGA Majors he had won, medals and honors ranging from the Presidential Medal of Freedom to coins he was awarded for some of his first career wins as a PGA Amateur. I found myself in awe and humbled by the sights before me. Within a few moments Mr. Palmer entered the room, there was no grand announcement or big gasp in the room, Arnold entered quietly and surveyed the room of young men and masons before him, I can distinctly remember seeing his smile for the first time. As we realized that Mr. Palmer was in the room, we slowly began to congregate toward him. Mr. Palmer’s longtime assistant Donald Giffin, a 70 year senior DeMolay and fellow recipient of the Legion of Honor on this momentous day, made the introduction. Many celebrities have a reputation for being larger than life and selfish, but Arnold Palmer was an exception. He began showing us around the room, stopping at certain points to tell us about honors or awards in the room. The way he told his stories and spoke with us reminds me greatly of how my grandfather recounts family tales to my siblings and I. After the tour was complete, we gathered at the back of the lobby to perform the Legion of Honor Investiture for Mr. Palmer and Mr. Giffin. We were given the opportunity to take pictures with the newest DeMolay Legionnaires, individually and as a group. Arnold thanked us for the honor and told us how proud and humbled he was to be receiving our Legion of Honor. Bro. Jake Beers said it best in a blog post he wrote about the day a few years ago, “I don't think I really noticed until now that a man who seemingly had everything - trophies, medals, championships, Presidential recognition - could be so proud, so honored, to be given this recognition from an organization such as ours.”

My favorite part of the day was yet to come. Arnold led us around the corner and through two doors into his personal office. He asked us to gather around and we sat and spoke with him for quite some time. The DeMolays in the room were allowed to ask questions and Arnold answered each and every one with a smile, a story, and in many cases, a joke or two. On the table between the chairs in his office were medals embedded in a green felt table with a glass covering. The medals had the names of golf courses ranging from Palm Beach to Augusta. One of the DeMolays in the room asked Mr. Palmer what the significance of the medals in the table is. Mr. Palmer explained that he has a medal on that table for every course he won an event at. Rather quickly another DeMolay asked him what the empty spots on the table are for. Arnold began to smile and without missing a beat replied that the empty spots are for the events he will win in the future. He then showed us his model plane room. Arnold was an avid aviator, and he told us about his experience flying each and every one of the planes in the room. When the time had come to depart he shook each of our hands and asked us our names. It seemed so personal and simple for a man who may very well be the most famous person I will ever meet in my lifetime. It was a day I will truly never forget for as long as I live.

Arnold Palmer passed away on September 25, 2016. It was exactly one year and one day after I had the privilege of meeting him. His achievements and contribution to the golf community, masonic youth groups, and our nation will have a lasting impact for many years to come. 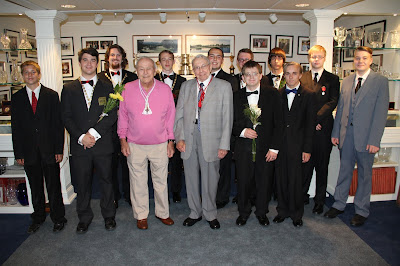 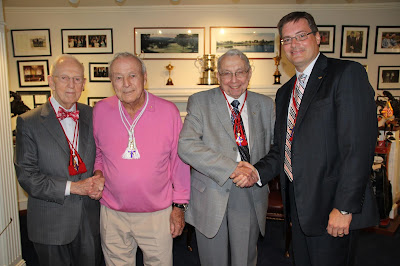 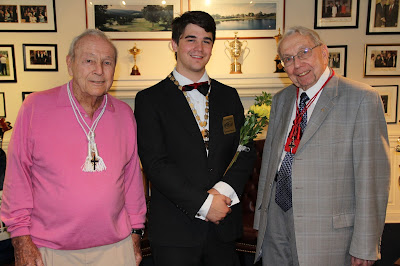 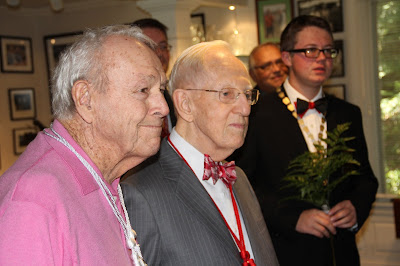 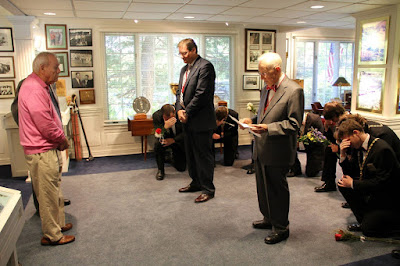