Sunday morning at the PA DeMolay Annual Convention is a flurry of activity, and this year's event was certainly no different. From the Sweetheart crowning, to the Guild of the Leather Apron presentation, to the installation of the State Officers - it's a whirlwind day! It's a great time to highlight the leaders of our organization, both young and old, and give out some pats on the back to those who most deserve it.

This year I had intended to publicly present one of these "pats on the back" but due to time constraints I wasn't able to. "Dad" Zack Panitzke has been my right hand man throughout my entire DeMolay (and Masonic) career. He was the guy who first line signed my DeMolay petition. It was with him that I traveled the Commonwealth to DeMolay events. It was his family that first introduced me to Masonry. Without "Dad" Panitzke, I wouldn't be where I am today. He continues to work with me, even now, and I can't thank him enough. He gives tirelessly of his time and efforts to make whatever program he is assisting with work. 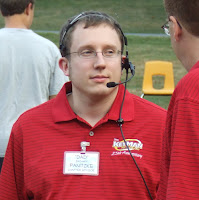 Convention is a big job but it is made easier when you have great people helping you. I couldn't have pulled off Convention the last three years without "Dad" Panitzke. The lanyards that were given out this year were entirely coordinated and designed by him (with the exception of the new Mission: Control! logo.) He was also responsible for arranging the hospitality suite and served as an onsite staff member with all of the venues over the weekend. He truly made himself indispensable.

So, on Sunday morning of Convention 2011, I had intended to publicly present "Dad" Panitzke with the DeMolay Medal of Appreciation. But, just what is this award? According to DeMolay International "A Chapter (or Jurisdiction) may recommend any person over 21 years of age for the DeMolay Medal of Appreciation in recognition of outstanding service to DeMolay. The nominee can be a man or a woman and does not need any Masonic affiliation. Nominations may be made at any time. The nomination form must be forwarded to the Executive Officer and, if approved by him, will be forwarded to the Grand Secretary."

I ended up giving the Medal to "Dad" Pantizke after the event and personally thanked him for his help during the year. If you happen to see "Dad" Panitzke (he'll be at Key Man in just a couple of weeks) thank him for his hard work in making Convention 2011 a success!


Oh, and because I can never go without making a good Brotherly jab at him, check out this video of "Dad" Panitzke doing the chicken dance - at least until he realized we were filming him!