Being the Director of Convention may seem like an easy or a fun job. On some levels, it is! I wouldn’t do the job if I didn’t get some enjoyment out of it. However, there are many times that being Director isn’t fun at all. One of those times is when we ask for the yearly survey after Convention. It can be tough to take honest criticism, but I sincerely believe that it makes for a better Convention program. So, as I have done in the past, I am endeavoring to be as open and honest about the Convention program as I can be. I felt like this year’s Convention went pretty well. It appears that many of you felt it was okay, but there were some problems that I wasn’t aware. Let’s review! 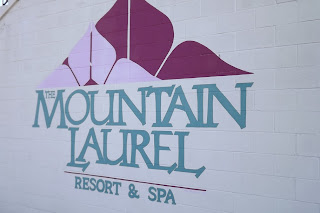 We’ve gotten 42 surveys returned so far this year. Twelve of these were from Active DeMolays, 29 from adults, and one other (probably a Sweetheart.) This accounts for roughly one quarter of our attendees. As with last year, I asked the attendees to rate the different parts of the event on a scale of 1 to 5, with 1 being “terrible” and 5 being “outstanding.” In my eyes, a score of a 3 is average. I would like to be above a 3, but I am willing to accept a 3 as decent score. Let’s start by looking at the graph. 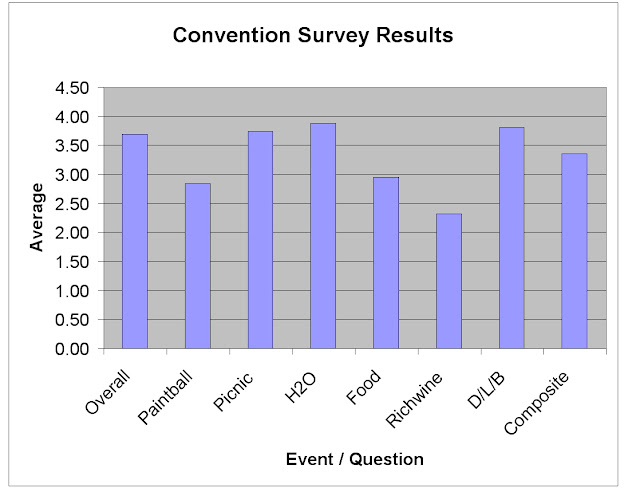 What do I conclude out of this graph? Looking at the first number, I immediately think we had an average Convention. This bar corresponds to the question “How would you rate your overall Convention experience?” The average was just under  3.75 out of 5. That tells me that overall we did a decent job. There is still room for improvement, but people were mostly happy. The other score that I will draw your attention to is the last one on the chart, labeled “Composite.” The Composite score takes the scores given in all of the other categories and averages them for each person. In this case, the Composite score was just 3.36. I put more faith in the composite score than I do in the Overall score. Why? People are generally more forgiving of the event as a whole. It’s easier to rate individual things poorly than the entire event. This helps provide insight as to how honest people were about their scores (meaning did they pad the first score a little bit so it didn’t seem like they hated the event, or did they rate the whole event low based on only one bad experience?) This year, I see that the scores are much closer, being only a third of a point apart. That tells me that respondents were pretty fair with the scores. The "Composite" average also gives me a baseline to work from when deciding if a particular event was scored above or below average.

The first event score, Paintball, was a disappointment to me. At a 2.85 (which is only slightly up from last year) I am seriously considering cutting paintball from the Convention program. The trouble we seem to run into is that attendees expect a world class field on a back yard budget. We just can’t seem to make it work. I’m going to try to find a viable option for the future, but I anticipate paintball disappearing from the program.
The Picnic received 3.75 out of 5. That’s a decent score in my book. The biggest issue was the lack of communication on my part as to how the coupons could be redeemed and where. I will take full responsibility for that. I should have prepared an information sheet for the attendees so that everyone knew exactly where to go. We all live and learn, and I now know this for next time. This is the kind of constructive feedback I, and the Convention staff, need.
H2Oooooh! scored a 3.88 out of 5. That’s above average for the event and a good score overall. I heard mostly positive comments on this event. It’s a win / win for us as Convention planners, as it is indoors. I’m always in favor of rain proof events. It seems that everyone enjoyed the facility and the price was right. This kind of amusement park will definitely be on my list for the future. The biggest issue I saw related to this was the bussing. Many people weren’t willing to wait for the shuttle rotation, or didn’t want to ride on a school bus. To pull back the curtain a little bit, the minute we decide to go away from the hotel and provide group transportation, our costs sky rocket. The shuttle system costs around $400. If we were to have had 3 buses do one trip, it would have cost nearly $1500. That’s a huge price difference! This is why I asked the transportation question as part of the survey. 35 respondents said they would be willing to drive less than 10 miles, while only 7 said they wouldn’t. This tells me that if I can find some quality, local facility, I can save money on transportation and give a better experience at the event. That will be my plan from now on.

The food earned a score of 2.95. This is below average for the event along with being slightly below average in general. I didn’t hear any complaints about the food at Convention, so this was a surprise. I encourage all Convention attendees to please let me know about issues so I can address them at the event instead of learning about it later. I didn’t realize that folks were so dissatisfied with the food selection. The key thing to keep in mind is that banquet food is banquet food. It’s tough to do anything fancy or out of the box when feeding 200 people at once. We’ll try to work on this in the future, but I’m puzzled as to what to try.
The workshop by Capt. Richwine was our lowest scoring event, garnering a 2.32. It doesn’t help that Mr. Richwine was late to the event, but I heard that he was also very dry, and spent too much time on historical information. This is the gamble we take when we ask for a person from the outside to come speak. You never quite know what you are going to get. It’s very difficult to find a speaker who will appeal to everyone present and that is applicable across . We were also in a tough part of the State to find speakers this year. I have some thoughts for next year’s speaker, which I think everyone will enjoy.
Last, but not least, are the degrees, luncheon, and the business session. This rating is more about the pace of the event and how we handle the distribution of awards. A score of 3.81 here tells me that we have found a good mix of meals, presentations, and awards. People seem to feel that everything flowed smooth and didn’t take more time than necessary. The electronic balloting system certainly helps with this. I intend to keep this portion of the program very similar in coming years.
Whew! That was a ton of information! We’re not quite through yet, though! We continue to debate the purpose of Convention (both inside and outside the PA DeMolay office.) As I said last year, there are generally two schools of thought. The first school believes that Convention should be focused on the election, learning more about DeMolay, and doing more fraternal things, like Induction ceremonies and such. The other view is that Convention should generally be a fun event, with the elections and other stuff thrown in for good measure. 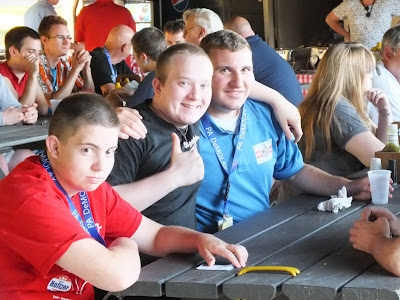 I still personally believe more in the second theory. We, as a jurisdiction, do very little that is purely fun. Sports tournaments are competitive, and Spring Leadership Weekend is for learning, but Convention is the only pure "fun" weekend we have, and I'm okay with that. I'm not opposed to adding in educational events, but I don't want to see that be the main component of the event. I also don't think it's a place for guys just to get together and "hang out." This is often referred to as "fellowship" time. However, I've learned that having this kind of time is a bad idea. I don't like having guys running around a hotel with nothing specific to do, as this often leads to behavior issues and damages, which we certainly don't want. I will add that the young men proved very well behaved this year. I was incredibly happy that we didn’t lose one room key either! When we have had the plastic room keys, it seems that we are replacing one an hour. This year, when there was a penalty for a lost key, everyone kept track of theirs. Isn’t it funny how that works?
As ever, the final burning question is "where is Convention going to be for the next few years?" Many of you suggested sites in . Unfortunately, Philly is still outside of our price range. We continue to look in that area, but to go anywhere near would increase the cost per person by at least $50, which we think is too much. This is backed up by the data we received in relation to this year’s event, which said that most of you would rather not pay more to stay in fancier digs. This was what I suspected and I will continue to look at hotels in the price range we’ve been using.

We are locked in to the Holiday Inn in , next year. Bro. W. Thomas Moyer, PSMC, is the new Convention Youth Director. He is already working on ideas for activities and events. If you have thoughts on what we should do, talk to him! For 2013 we are scheduled at the Bayfront Sheraton and Convention Center in It is my goal for that event to be my last Convention as Director. I have someone in mind to take over the program at that point, but nothing is set in stone yet. As more information becomes available, I’ll keep you up to date!
There you have it! Convention in a (rather large) nutshell! As always, I'm available for comments and feedback via this blog or at scanthony@pademolay.org!
Frat! ~ "Dad" Seth Anthony
Posted by PA DeMolay News and Views at 2:54 PM