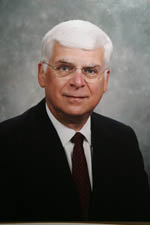 On June 18, 1960, a young man by the name of C. Alan Walker was one of one hundred young men in the charter class at the Institution of Clearfield Chapter, Order of DeMolay

Just last week, that same C. Alan Walker was nominated to serve as Community and Economic Development Secretary for Pennsylvania Governor-Elect Tom Corbett.
Bro. Walker, still a resident of , is the president and CEO of Energy Company, Inc., and serves as a member of the board of directors of the Pennsylvania Chamber of Business and Industry and the Pennsylvania Coal Association.  In nominating him to the position, Mr. Corbett noted that “has an impressive record of achievement, in both business and civic arenas.  He will be a valuable resource to the administration as we work to turn our economy around and take into the future.”
Bro. Walker is a graduate of both , where he earned a bachelor’s degree in economics and where he serves as a trustee, and , where he earned his master’s in business.  He is a director of the Clearfield YMCA, president of the Bigler Civic and Recreation Association, past president of th Bradford Soccer Association and serves as a director for the Clearfield Hospital Board and the Clearfield Foundation for Health Services.    Among his many honors, he has received the DeMolay International Active Legion of Honor and the “Service to Humanity” Award from .
Bro. Walker has also spent a lifetime encouraging young people to be community-spirited and civic-minded.  Let me share with you just two examples with which I am well-acquanted.  We know that he has been supportive of Pennsylvania DeMolay through regular Key Man Scholarship contributions.  He has also donated his Penn State Football Tickets to be used for membership recruitment incentives (just ask Jake Palo, Past State Master Councilor, who was a brand new member of Erie Chapter when he won one of these tickets!)   In addition, I personally benefited from his mentoring and encouraging character when, at a very young age of 24, I decided to run for Clearfield Borough Mayor.  Bro. Walker was one of my earliest supporters, both in encouragement and donation, and was certainly an important part of my early success!


Please join me in congratulating this outstanding Pennsylvania Senior DeMolay as he continues his service to his community and all of !
Fraternally,
"Dad" David W. Berry, Executive Secretary
Posted by PA DeMolay News and Views at 9:57 AM