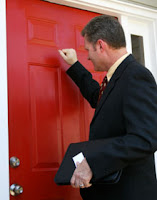 Today's article is brought to you by "Dad" Bruce Neubauer of Westmoreland Chapter, located in Greensburg, PA.

What I've have learned about visitation points is that it is not just a number on a piece of paper; it is indeed a powerful tool. Our members  at Westmoreland Chapter first started traveling to get "the Judge" (the PA DeMolay travelling gavel.) That might be how we started, but it has grown from there. Now, don’t get the wrong idea. Westmoreland is still dedicated to bringing "the Judge" back to Greensburg. But now we look forward to travelling for other reasons too. As Advisors, we do not talk about the competition. We just say there is an activity coming up and the DeMolays ask at a meeting "...who wants to go?" Fortunately we have the advisors that like to travel and enjoy the events just as much as the young men.

I would like to take my story back to Key Man 2010 for a minute. Key Man proves the idea that in DeMolay, the members and advisors you don't know are just friends that haven't not met yet. We came home from Key Man and a couple months later one of our members said that he wanted to go to an installation at a Chapter that a friend he met at Key Man belonged too. Without asking where the Chapter was, the answer from the transperation advisor was "Sure!" Then we found out the Chapter was North East Chapter in Philadelphia. But you know what, the answer was still "yes."  Our member went on the visit out of friendship and brotherhood. He didn't want to make this visit for points - he wanted to make it personal. 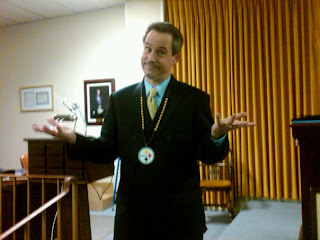 This past Sunday one of our Appointed State Officers from Westmoreland Chapter was asked to help at an installation of officers at Friendship-Bray Chapter. We had three other members ask to come along. At the last minute another office needed filled and one of the guys coming along agreed to fill in. Again this does not sound like a cut-throat points based competition. It sounds like brotherhood. It also sounded like a chance to capture one of the most illusive pictures in PA DeMolay history - a shot of "Dad" Rick Freedman, a long time Philly area resident, wearing what can only be described as a Pittsburgh Steelers collar. Great work!

As I was riding home from Friendship-Bray I started thinking how important it is to support other Chapters. I feel that one of the most important days in a Master Councilor's term is the Installation. It would be great if you could get all the nearby Chapters to show support.

The advisors of Westmoreland DeMolay are very proud of our young men. They have certainly caught the spirit and gotten the meaning of DeMolay.

If you let Westmoreland know when you are having an installation, We might just be there. 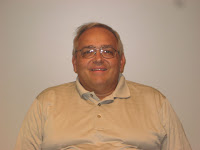 "Dad" Bruce Neubauer is the Chairman of Westmoreland Chapter. He has attended the last two Key Man Conferences and is quickly becoming a familiar face around PA DeMolay. He is actively involved in the Tall Cedars of Lebanon, where he serves as a District Deputy Supreme Tall Cedar and was elected to the Board of Directors. He also does a great job explaining how important the funny hat they wearreally is (its called a "pyramid" by the way) . This editor certainly appreciated it and will wear his proudly.
Posted by PA DeMolay News and Views at 9:10 AM