Well, no chicken-- sorry.  But we have a winner!  The Ancient Accept Scottish Rite of the Southern Masonic Jurisdiction sponsors the Paul R. Kach, 33rd Degree DeMolay Essay Contest.  The topic for this year's essay was a broad one, with very little direction at all:  "DeMolay – The Premier Youth Organization!"

The 2010 results are finally in, and PA DeMolay has something to celebrate!  There are 8 Regions in DeMolay International and winners are picked for each Region in two age groups.  The regional winners get $300.  The two national winners each get $1200!

For the Mid-Atlantic Region (2) our own Jonathan T. Webster of Delaware Valley Chapter won the 11th grade and higher division, and received the $300 check by mail.  Then he was informed by the Scottish Rite Valley of Philadelphia that they had been asked to present him with ANOTHER award from the Southern Jurisdiction of the Scottish Rite, and last week he was presented with the Grand Prize of $1200!  In the photo below, left to right, are Bro. Webster, Robert Taylor, HLOH, Commander in Chief of the Valley of Philadelphia and Russell Baker, HLOH, Active for Pennsylvania, AASR. 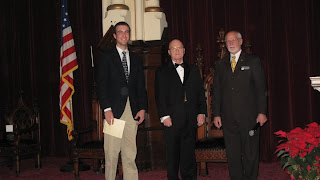 Which brings me to the editorial portion of this blog post... why is it that so few DeMolays actually participate in this contest?  There were only a total of 26 essays submitted from across the entire country!
Region 1 .....2; Region 2.....10; Region 3.....2; Region 4.....6; Region 5.....3; Region 6.....0; Region 7.....1; Region 8.....2.    You will note that in Region 2 (our Region) there were 10 submissions.  Seven (7) of those were from Pennsylvania!  The odds of winning an award are pretty high, especially when you consider that about the submissions were divided between age divisons.  Even if there was only ONE submission for one of the age groups, that means that this year's participants had, at the very worst, a 1 in 25 chance of winning an award.  In OUR Region, 2 out of 10 participants won a $300 Regional prize. In some Regions, it looks like all you had to do was put your name on a page and you could be a winner of a significant prize!

Now, don't get me wrong-- I am not saying this to denigrate Jonathan's essay-- it was a very creative submission, and as soon as I read it I thought it would have a really good chance of being a winner.  He is a very talented writer, and he deserved the prize!

But I read all of the others from Pennsylvania, and I have to say that I was quite proud of the submissions we sent in.  Many of them were from the Elected State Officers, because I feel that, in order for them to promote the program to other members, they have to participate in it themselves!  (Someone once called that "Leadership By Example." and I don't think it is an old and out-dated concept.)  Additionally, I think it is a good thing to stop and think about our Order, and to put ideas on paper about its effect on our lives, and its prospects for the future.

The PROCESS of writing the essay is as important as winning a prize... it is, like everything else in DeMolay, an opportunity to grow and learn and become a better son, a better student, a better leader, a better follower, a better thinker, a better brother, a better boyfriend, a better citizen and a better man.

DeMolays:  when opportunities like the KACH ESSAY present themselves to you, as DeMolays, grab them by the horns and wrestle with them, TAKE CONTROL of your future... in the long run, you will be glad that you did.

Advisors:  when opportunities like the KACH ESSAY present themselves to your DeMolay members, ENCOURAGE them to take a risk and spend an hour or two crafting a good answer to the essay question.  Read it over with them, and, without correcting every little thing, ask them questions to help them clarify their thoughts, and to discover grammatical and stylistic errors.  If you aren't comfortable doing this, find someone in your Advisory Council or Lodge who CAN do that, and create a positive mentoring relationship between young and old.

The topic for the 2011 Paul R. Kach, 33rd Degree DeMolay Essay Contest will be announced soon, and essays will be due just a few months later.  Don't miss out on a fantastic opportunity!