As PA DeMolay prepares for the upcoming C.L.U.E. Spring Leadership Weekend, to be held May 2-4, 2014, at Patton Campus, it's now time for the investigators to release the information they have gathered so far. 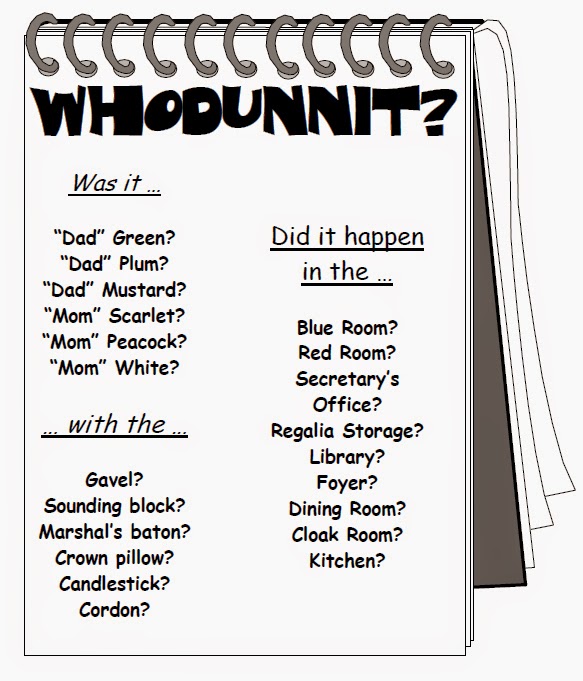 "Dad" Boddy was last seen exiting the Kitchen (using the WRONG DOOR) with a worried look, or looking worried; either way, something was afoot. He didn't even grab a slice of last night’s cold pizza! Was he trying to get away? Was someone chasing him? Was his life or wallet in danger?


There were some incriminating items found out of their normal places when the first search for “Dad” Boddy was made.

3. The Marshal’s baton - carried by the Marshall to conduct people around the room…maybe it was used to conduct “Dad” Boddy out of this world into the next?

4 The Pillow - Used in the Chapter room to hold the Crown of Youth…could it also have been used to stifle the screams of “Dad’ Boddy?

5. Candles - There are seven of them, all in heavy brass holders…one fell on my foot once…it hurt…what could it do if it were dropped out a second floor window on an unsuspecting “Dad’ Boddy?

6. Cordon - Normally a decoration on the shoulder of the Officer’s robe…but it could have made a nice garrote or a noose in the hands of someone looking to git rid of “Dad” Boddy.

All of these things were found in and around the various rooms of the Chapter’s meeting place, which includes the Blue Room, the Red Room, the Secretary’s Office, the Regalia Room, the Library, the Foyer, the Dining Room, the Cloak room and the Kitchen. 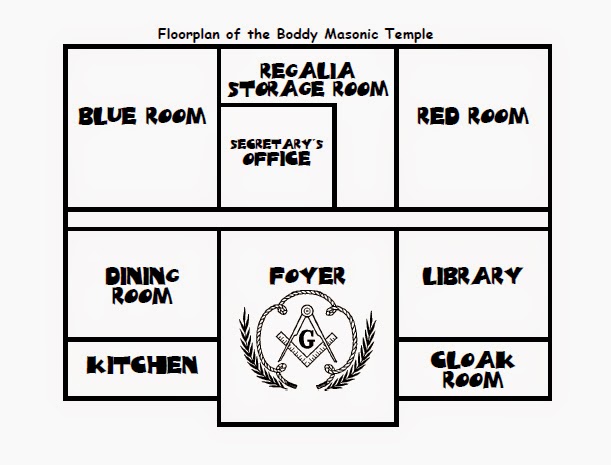 Now, we know you are thinking ”What about the knives in the Kitchen? couldn’t they have been used?” or “Couldn’t someone have slammed “Dad” Boddy in between the Blue Room Doors?" or “Couldn’t have “Dad" Boddy been grabbed by someone who isn’t on the Advisory Council?" or “Hey, Why doesn't your meeting center include a bathroom?” or “Will we have time to go to the pool before lights out tonight?”
Well forget about all those things…there are really logical reasons why those things are like that and I just don't have time to tell you everything! sheesh! Way to spoil a whodunnit!

So, here is your task. Find out what happened to “Dad” Boddy, including which of the members of the dysfunctional, delusional, occasionally flamboyant Advisors do you think did…well, whatever it is you think they did. Also, we need to know what inefficient, cumbersome and overtly symbolic tool did they use and which room in "the  meeting place with no bathroom" did they do whatever they did to him in.

For one day, and one day only, we will be loading all of these loonies into one area where you can observe them, question them, and, if you are smart, try to avoid them while you try to figure out…


WHAT HAPPENED TO “DAD” BODDY?

Posted by PA DeMolay News and Views at 8:27 AM