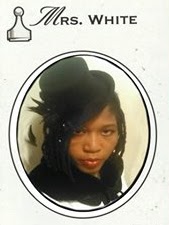 As PA DeMolay prepares for the upcoming C.L.U.E. Spring Leadership Weekend, to be held May 2-4, 2014, at Patton Campus, we thought it high time to introduce you to some of the characters that you'll meet during the weekend. This series of articles will run every Thursday for the next several weeks, so make sure to check back!

Beatrice Eugenia Black was born to a family of poor maids. They were all maids. Her mother was a maid. Her father was a maid. Her brothers were maids. Her cats were maids. None of them were particularly good maids (which is why they were still poor) however, from a very young age, Beatrice learned the value of a dollar. This value followed Beatrice into her teen’s right up until she married her first husband, the son of the founder of a q-tip company, Lord Count Esquire, Jr.
The newlyweds shared a small home and seemed off to a good start. Their house may have been small but they had all the q-tips they needed. Little is known about the life of the Lord or Beatrice Esquire's first marriage ,as neither lasted very long. By her 19th birthday Beatrice buried her first husband and sold their home and q-tip mountain for a small fortune. Being the demure woman she is, she rarely discusses the Lord's death and when asked about their time shared replies “He did always keep the cleanest ears.”
It was at the late Lord's funeral that Ms. Esquire met "Fat Cat" Pat of Fat Cat Salami aka the Salami King aka the Salami Swami. The wealthy entrepreneur was a portly man of 390lbs and quite well off. So well off in fact that his palace had two real salami towers. Delicious! Days after being wed to Beatrice, Fat Cat was discovered in his study, by a servant no less, the corpse weighing in at 90lbs. No doctor could explain where all the weight went, but the huge sudden drop shocked his body and killed him. When asked for a statement upon selling his company Mrs. Cat said “Now what I am supposed to do with all the cheese and eggs?”
Little is known about the lady’s third husband, Mr. White. No one can find any record of the gentleman’s profession, his name, or date of birth. All that is known was that he was very rich because of his previous business ventures (also unknown to the public). Recalling her late husband the lady sobs “I’ll never forget sweet, kind what’s-his-name.”
Recently attention was brought to the fact that most of Mrs. White’s husbands have had untimely deaths as her latest late husband was buried without his head. She still says to this day “We may not have been able to have had an open casket but at least he was buried wearing his favorite hat.”
Mrs. White has no children however she currently resides with her eleven cats near Feline Fields, PA.
Posted by PA DeMolay News and Views at 8:40 AM