The George Washington Masonic National Memorial can be found in Alexandria, Virginia. The Order of DeMolay is known for donating the statue which is the center of this monument. It was considered a gift to Freemasons everywhere. The statue is made out of bronze and stands 17' 4" tall. It was presented on February 22, 1950 by President Harry Truman on behalf of DeMolay. "Dad" Land sent out a message in 1940 making this a national fundraising effort, with hope that every member would donate .25 cents towards the cost of the statue. Several Chapters worldwide helped raise funds to get the statue built. Although I'm sure it may not have been the only Chapter in Pennsylvania to help raise funds, Trinity Chapter, which met in Bradford, PA, was published in the local paper in 1953 for having helped donate $200 towards the efforts to build the statue.

For more information about the GW Memorial and the statue of George Washington, click on the links below. 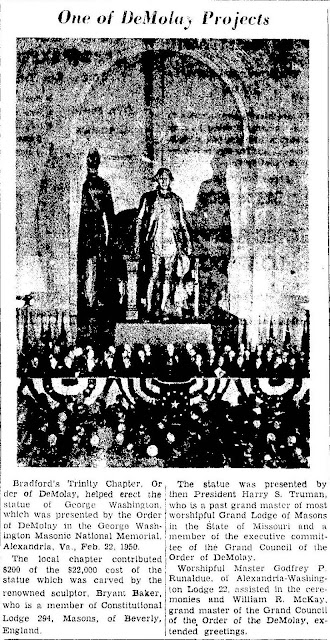