Convention is not to far away, so lets get to know the rest of our candidates for Elected State Office. We have two candidates for the office of State Scribe. Our second is Bro. Mitch Holmes of Templar Chapter.

Hello everyone. My name is Mitch Holmes and I am running for the Elected Office of State Scribe. I joined Templar Chapter almost 4 years ago, and since then, its been the best decision I made. The sense of Brotherhood and long-lasting relationships have kept me intrigued and interested in the organization since I have joined. Currently being an Appointed State Officer and Past Master Councilor, I want to get more involved on the state level by becoming an Elected State Officer. 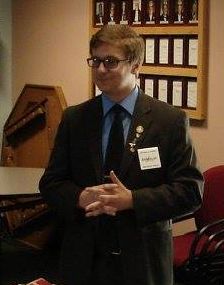 What is your greatest DeMolay experience or accomplishment?
This is a hard question, as there are so many things I can say, but it would have to be when I became Master Councilor of my Chapter. Before I became Master Councilor, our Chapter had two active members, and we were very inactive. Of course, I was sort of nervous because I did not know much about DeMolay and I took a high leadership position with my Chapter. When I took this position, I learned several things about myself. I learned that I was a leader and wanted to do all I can for my Chapter to help it succeed. I got heavily involved with DeMolay to help make it better. With the help of my Advisors and my parents, I was able to bring in members and help revive my Chapter. This drive I have, to do better and help others, is what I want to do for PA DeMolay. Becoming Master Councilor was the reason why I am so intrigued with the organization.

Who are some of your DeMolay influences?
I have several influences that have inspired me in this organization. When I first joined, it was when PSMC Isaac Holtzer was SMC. The first E-town weekend I went to was Grand Master’s Class and I must say that I was impressed with everything. Between the friendly atmosphere, brotherhood, and unification, everything about that weekend influenced me to become more involved with DeMolay. I look at the state officers then, and even now as well, their actions and hard-work make me want to become more involved in DeMolay by helping others to succeed. My other influence was when I first went to KeyMan. It was the 2016 Conference when I first attended, and I did the Ritual and Performance Track. Since that KeyMan, my friends and Advisors who taught that course inspired me to do better and become more involved. Just an FYI, I did not know what ritual was until I attended KeyMan (thanks “Dad” Schaeffer!) These are just some of the influences, but they are the major ones.

What are your goals if elected to serve as a State Officer?
There are several things I wish to accomplish if I were to be elected as State Scribe. Besides working with the State Officer Corps and doing my duties, I want to push all state aspects such as programs and incentives. More recently, the Squire’s program has been approved in Pennsylvania and I would like to personally work with the chapters to help set up a Manor. I also want to help DeMolays with the Knighthood Program and influence others to become actively involved with our state programs issued by the SMC. I also want to work with Chapters and actively help plan prospect events around the state to help boost membership ratings and activity within the chapter level. With my leadership skills and experience of being part of the State Officer Corps, I feel that I can influence and help PA DeMolay to flourish within my term of office. I want to support our Chapters and DeMolay in PA in anyway I can and make others feel what I have felt in DeMolay as well as accomplish everything that I have accomplished. That in the future, PA DeMolay can grow and develop in the future.

Posted by PA DeMolay News and Views at 3:53 PM