The following blog post is from Brother Mitchell Holmes, State Senior Deacon for Pennsylvania DeMolay and PMC for Templar Chapter. 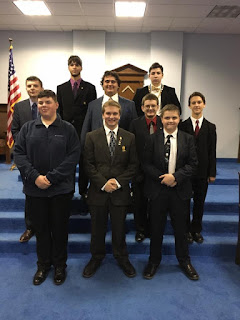 Have you ever been scared to do something? Whether it would be entering a haunted house or a scary movie? If you said no, I'm sorry to say that I don't believe you. Sometime in your life, you have been scared to do something. On October 17, 2014, I made one of the best decisions in my life; joining DeMolay. Before I joined, I remember that I was worried about joining because I knew it would change me. At the time, I was a video gamer and I was worried about it interrupting my game time. I also knew that I had to commit to going to the meetings and events that our Chapter was holding. So, my personality kicked in and I said, “Yes, I would like to join.” I was always willing to try it out, and if I didn't like it, I just wouldn't come back. I went to the next meeting and filled out the necessary paperwork. At the time I had joined, there were only five members. Most of them older guys between the ages 16-18. Being thirteen at the time, I was very quiet. A year goes by, and what was five of us, became three members. A year after that, there were only two members, Bro. Chris Johnston and myself. At the time, I was considering quitting or switching chapters because throughout the time I was there, my Chapter did nothing.

One day, my Chapter Advisor came to me and said, “Mitch, we need you to be Master Councilor.” When he told me that, I became scared. Mainly because I never had taken a major leadership role before in the Chapter. He then told me to prepare a term plan for the next meeting. That July, I had gotten installed as Master Councilor. I implemented several things, such as a Chapter website, membership incentives, and a newsletter. I was able to bring in three members to my Chapter. Along with that, the members I brought in, brought in members. What became two of us, became eight within eight months. I was able to take a struggling Chapter, and make it active again. While I was doing it, I never knew that I was a natural leader. I discovered things about myself that I would have never been able to figure out if it weren't for DeMolay. Being part of DeMolay has made me communicate, lead, and develop myself for success in life. I had unmasked my unknown traits through DeMolay.

The primary message for this story is to discover yourself. DeMolay is great for that because it touches on all the skills we need in life. Whether it be Robotics Club or Spanish Club, get involved because you can only discover yourself if you're involved with something. You can discover different traits besides leadership. You might find out that you are a good artist, writer, public speaker, treasurer, singer, etc. I want you to UNMASK YOUR UNKNOWN by being involved!

I did a TED talk last year about my story in DeMolay. The video they had originally shot, had audio issues. So they had to record it again. Here is the link: https://youtu.be/JioVtGS2iV0
Posted by PA DeMolay News and Views at 3:11 PM