DeMolay is the Best Thing that Happened to Me. 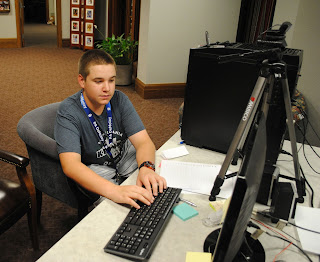 Before I joined DeMolay, I was a shy kid not knowing what I wanted to do with my life. I liked helping people and hoped that I could find something to allow me to help others. I tried the Cub Scouts, but I didn’t like it too much.

I was helping out at the Zembo Shrine Circus one day and saw a group of boys wearing shirts that said Carlisle DeMolay. I asked the Potentate at the time who these boys were and what DeMolay was. He gave my dad the contact information for the Chapter Advisor at the time. Knowing that I lived further away than their Chapter was located, they connected my dad to the Chapter Advisor of George Washington Chapter, which would eventually become my home Chapter. They agreed to come to my house for an interview.

A week later, I was going to my first DeMolay event. After joining the Chapter, I was asked to take an office, so I chose the office of Chaplain, with the intent to show everybody that I am ready for DeMolay. After one term as Chaplain, my Chapter had a major shake up in leadership, for which I offered a helping hand by taking the role of Senior Councilor. When Brother Jake Beers became State Master Councilor, he was looking for State Officers and I signed up hoping to become the State Chaplain. I received that office and now I am the Master Councilor for  George Washington Chapter. None of this would have been possible if I didn't ask about DeMolay.

Posted by PA DeMolay News and Views at 3:43 PM