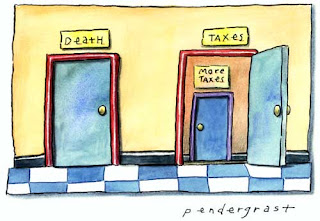 It's about this time of year that many young men around the country hear their parents bemoaning the fact that they have to do their taxes. Similarly, many of those same guys are filing their own taxes for the first time after having gotten a job in 2011. Tax season has come to be the bane of many an American's existence.

However, for most of the younger guys out there, taxes really aren't that hard. Taking a little of responsibility now will pay off big later (in the form of a return and the ability to do your taxes without an accountant.) The folks over at the Art of Manliness have prepared a great article entitled "A Young Man's Guide to Doing His Taxes" about this very subject and I encourage you to read it.

I'm reminded of the seventh Preceptor - Patriotism. There is a time to be a hero of war as well as a patriot of peace. Doing your duty as a citizen of our country is the first step on that path.