First, I'd like to apologize for not getting a blog post up yesterday. I actually stayed home with a nasty headache and just relaxed. I think in the last three years I have only ever taken one other sick day, so you know that this had to be one heck of a painful day for me to not be in the office!

Now, on to our post! I would be willing to bet that the majority of the DeMolays that live here in the United States give little thought to how DeMolay operates in the rest of the world. Not only do we have Chapters in Italy and Romania, but in Bolivia and other parts of South America as well. However, one of the areas that tends to get overlooked the most is the Philippines. DeMolay has a very strong presence there, however they are not part of the same Supreme Council that we are. They are actually run by their own governing body. Think of it like a DeMolay franchise - like TGIFridays or Applebees. We gave them the model, the resources, and the program, but they operate it with little to no oversight from the United States Supreme Council. The key thing to remember here is that they are still our Brothers and that they believe that in the same tenets as we do.

DeMolay in the Philippines has also produced many famous members. Most of us in the States have probably never heard of them, but I assure you that in the Philippines they are very prominent. The most important of these would have to be 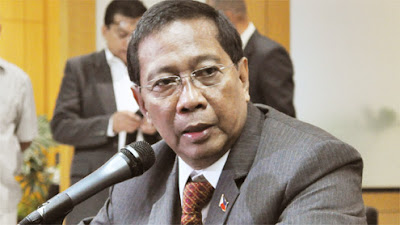 Born November 11, 1942, he joined DeMolay at a young age. He has was an excellent student, attending a quality preparatory school and would go on to earn two Bachelor's Degrees - one in Political Science and one in Law. During his college career he became a member of Alpha Phi Omega and would later pass the bar so he could practice law. In between his schooling and his jobs, he would work as a teacher at local schools and offer free legal assistance to those who couldn't afford it. Bro. Binay was also an early proponent of free and fair elections in his home Country and once spent time locked in jails and military stockades for his outspoken views.
In February of 1986, Binay was appointed Mayor of Makati City which started his political career and would assist the government in fighting attempted coups and mutinies. He earned the nickname "Ramboito" or "little Rambo" for his tenacious defense of the constitution. In 2008 he announced his bid for national office and assumed the office of Vice President in 2010. His political career has spanned decades, so make sure to head over to Wikipedia and read all about it!
So, next time you're thinking about your DeMolay Brothers and where we have come from, remember that we are truly a worldwide fraternity!
Frat! ~ "Dad" Seth C. Anthony
Posted by PA DeMolay News and Views at 9:43 AM