The Senior DeMolay highlight series has proven to be very popular. So far, we have covered an entertainer and a world leader, but we have yet to dive into the DeMolay Hall of Fame. But, today, we are going to do just that. If you have never checked out the DeMolay Hall of Fame Online, you should take a few minutes to do so. It's a great resource for information on famous men who were DeMolays - although, you don't have to be famous to get nominated to be a Hall of Fame member. Hall of Fame inductees are chosen through a committee of Active Members of the DeMolay International Supreme Council. They chose possible candidates based upon their contributions to society and how well they are known throughout the world. So, today, in keeping with the Hall of Fame and Bro. Matt Blaisdell's Mission: Control! theme, we present 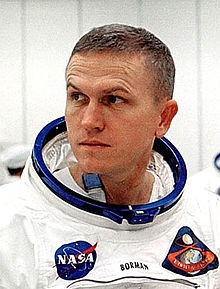 Bro. Borman was born in Gary, Indiana, but it was soon discovered that Frank had serious sinus issues and it was recommended that his family move to drier, warmer climate. The family packed up and moved to Arizona, settling in Tuscon (which Frank now considers his home town.) It was there that he was inducted in to DeMolay in 1943.
He started to fly at the age of 15. He is a graduate of the Tucson High School. He graduated from the United States Military Academy in 1950 where he served as an Army Football Manager, and along with part of his graduating class, he entered the United States Air Force (USAF) and became a fighter pilot. He received his Master of Science degree in aeronautical engineering from the California Institute of Technology in 1957. Later, Borman was selected for the USAF test pilot school and became a test pilot.
Before working on the Apollo project, Frank would spend time on the Gemini missions as well as working with a NASA review board that investigated the Apollo 1 fire. Having been recognized as a leader in the space program, Borman was tasked with leading the Apollo 8 mission. This mission was tested the feasibility of using the lunar module and orbited the moon twenty times before returning to Earth.

After his time at NASA, Frank would go on to become CEO of Eastern airlines which he later sold to Texas Air, retiring in 1986 upon completion of the sale. Borman returned to Tucson, Arizona, where he enjoyed rebuilding and flying airplanes from World War II and the Korean era. Borman has since appeared in the documentary When We Left Earth: The NASA Missions. On November 13, 2008, Borman and fellow Apollo 8 crewmembers Jim Lovell and Bill Andersappeared on the NASA TV channel to discuss the Apollo 8 mission. Borman currently resides with his wife Susan in Bighorn, Montana.
Special thanks to the DeMolay International Hall of Fame and Wikipedia for information on Bro. Borman.
Frank Borman controlled his Mission - as a DeMolay, as a Student, and as an Astronaut. How are you making your Mission a success?
Frat! ~ "Dad" Seth Anthony
Posted by PA DeMolay News and Views at 11:52 AM