DeMolay International divides its "Jurisdictions" (generally meaning a State or Country) into Regions. Pennsylvania is part of Region II which includes New York, New Jersey, Maryland, Delaware, Virginia, Nation's Capital, Ontario (in Canada, eh?) and Italy. Our region has a long history of excellence, and is renowned for how well we work together in planning Regional Conferences and events such as the Mid Atlantic Tournament of Champions (MATOC for short.)

However, the average DeMolay doesn't really get to interact with members from other Jurisdictions unless he goes to one of these events. One of the most interesting things in DeMolay is how different each Jurisdiction can be while still working within the guidelines set forth by DeMolay International. In an effort to familiarize you with our sister Jurisdictions from our Region, this blog will present a series of "Region II Spotlight" articles to give you some information about DeMolay in Region II. 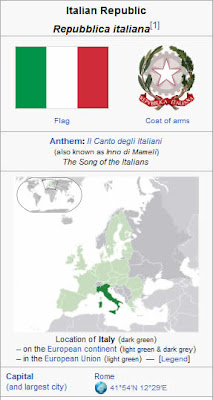 Io DeMolay per Regione Due. Huh? I am a DeMolay in Region 2. In a twist of fate, the Jurisdiction of Italy was inserted into our Region 2. In Italian, two is due', pronounced due ay. Since starting about 10 years ago, Italian DeMolay has grown to include 7 chapters. The newest chapter in the southern part of Italy is in Naples. Two Chapters are in Sicily, and 3 very active Chapters are near the capital city, Rome. 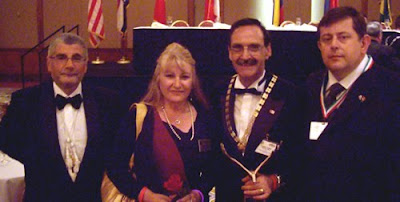 The DeMolay Italia delegation receives an Eagle from DeMolay International for Outstanding Membership Growth. "Dad" Critelli, EO of Italy is holding the eagle.

The Executive Officer, Luciano Critelli, is very enthusiastic about DeMolay. The delegation of Italian DeMolay usually includes well traveled at least 5 including Mom Rosalba Leone, a Chapter Advisor, and at least 2 active members as Congress Delegates. This year, Italian DeMolay moved East across the Adriatic Sea, and started a chapter in Romania and Serbia. There is great interest in DeMolay in countries formerly part of Soviet dominated Europe. Italian DeMolay advisors are very friendly and well traveled. Most speak English well enough to talk about DeMolay. The Congress delegates, generally take English in school and are anxious to talk with DeMolays from North America, as well as our Brothers from South America.

In 1969, I was home ported in Naples Italy, and spent 13 months of my U.S. Navy career mostly in Southern and Central Italy. I visited all of the famous sights, climbing Mount Vesuvius, stood on top of the Leaning Tower of Pisa, and put a kink in my neck staring at the beautiful artwork on the ceilings of the Sistine Chapel. I had taken 4 semesters of French in school, and easily learned the basics of elementary Italian. The first Masonic Lodge I visited, after becoming a Master Mason was in Naples. From my speaking with these Brethren at ISC, they were added to our Region, and now Io DeMolay Italia!

In the past, MATOC, the Mid Atlantic Tournament of Champions has recognized an Italian DeMolay, in his performance of the Flower Talk. The words, in flowing Italian, transcended the actual meaning and the feeling of the work was conveyed. The judges were very moved, and were emotionally affected. This Brother, Guiseppe Barrasco, of Roma No. 1 Chapter had met Region 2 DeMolays at Congress and became friends. When I had sent, as a courtesy, the usual MATOC information, he wrote back that he would like to attend and compete. 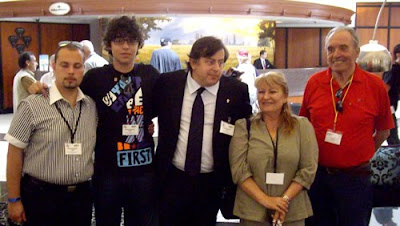 The Italian DeMolay delegation arrives at DeMolay International Sessions in Houston Texas in 2010. It was a long flight from Rome!

The Italians were supercharged at Dallas Supreme Council and Congress this year. Their main translator, a very jovial advisor, is also a super futbol fanatic. His hourly announcements of the scoring and happenings was priceless. When the Americans suffered the first bad goal judge call- he tracked me down in the lobby of our hotel to tell me that the "referees were thieves!!". I took a second and said back- "we were robbed!".

Each year, I try to present some small tokens of Masonry and DeMolay to our Italian Brethren, They use the tokens and memorabilia as membership incentives and small rewards for activities. However, in return, the Italians have been most generous and have presented very interesting tokens in return. For instance, somewhere in Italy, a few DeMolays are wearing Key Man 2005 shirts, and some have different Shrine pins. This year, I have a beautiful tile representing the 200th anniversary of Italian Freemasonry.

The Italians have a very impressive webpage and face book presence. I write to many Brethren, as we practice our language skills and Brotherhood. Molti Bene! Very Good! 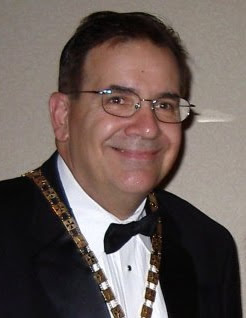 Special thanks go out to "Dad" Jim Ray, Active Member of DeMolay International, and Advisor for the Brandywine DeMolay Club, which hopes to be a Chapter very soon! "Dad" Ray is currently a Deputy Executive Officer for Pennsylvania DeMolay, and has served in various roles throughout the years, including Director of Ritual. "Dad" Ray is very involved with DeMolay Ritual, having served on several large tournament committees. He's also taken the field to play paintball with PA DeMolay, where he is affectionately known as the "Human Shield."
Posted by PA DeMolay News and Views at 7:58 AM