Building Relationships Between DeMolay and Masons 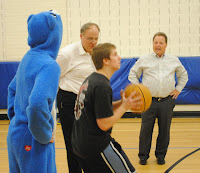 This past weekend, I had the privilege of watching one of the things that makes our organization great. I had the chance to watch the Right Worshipful Grand Master of the Grand Lodge of Pennsylvania Masons, take time out of his schedule and spend it with the DeMolay. The relationship between DeMolay and Masonry is a very important one. After all, one day the members of DeMolay may become Masons themselves. It's always great to see that the "fraternity" aspect that we teach can be exchanged between the organizations.

This past weekend was PA DeMolay's Grand Master's Class, a membership class in honor of the  Right Worshipful Grand Master, Raymond T. Dietz. Most years this event takes place with the Grand Master stopping in, sitting with us at the formal banquet, speaking to the members during his remarks with words of wisdom, and leaving shortly thereafter. This year was different. This year, the RWGM and the RWJGW decided to challenge the members to a basketball game later that night, and if the DeMolay members won, they all received $5. The members of DeMolay, represented by Mitch Holmes of Templar Chapter and Cody Anderson of Elizabethtown Chapter, won the game and won the $5 for every member in attendance. Although money may have been exchanged, the dollar signs are meaningless in comparison to the memories that were made that night. I saw members rallying and cheering for their team. I heard music playing and a megaphone used by our State Master Councilor Eric Dye (Yes, we gave him a Megaphone.) The Grand Master, who has a busy workload as it is, took the time to play a game with the members. The DeMolays will remember that as a high point throughout their DeMolay and maybe even Masonic career. 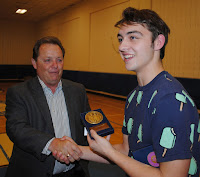 Its not often that members of DeMolay can say that they spent such a great time with the Right Worshipful Grand Master. Sure some may have held meaningful conversation with a GM in the past, but the interaction that took place on that basketball court was priceless. Sometimes the relationship between Mason and DeMolay tends to be more business than anything else. Its important for us to build relationships with the members of the Masonic Fraternity, and occasionally enjoy a laugh or two. Get to know the members in your local Masonic Lodge better. You'll find that the more down to earth our relationships are with the Masons, the more they may help us in the long run. Thank you Mr. Dietz and Mr. Wonderling for making memories with the DeMolay members. It truly meant a lot.

Until next time - "Dad" Joe Pullin
Posted by PA DeMolay News and Views at 3:20 PM