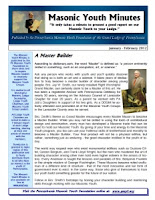 As part of my "day job," it falls to me to compile and edit the Masonic Youth Minutes, which is a newsletter that is published bi-monthly by the PA Masonic Youth Foundation. It normally contains an article on each of the Masonic Youth Groups, as well as program updates about what PMYF is doing.

However, for the last year or so, I've reserved the cover article for myself. Each issue, I use this space to write a "philosophical" piece. By this, I mean an article that relates to working with Masonic Youth in general. Often times, this space discusses why working with Masonic Youth is valuable, or what Masons themselves get out of such involvement.

One of the most popular pieces I've written in that column was entitled Wanted: Modern Day Zerubbabel. I'm re-publishing it here, as I think it had some valuable points and deserves wider distribution. Enjoy!

Masonry teaches that King Solomon, along with the other two Grand Masters, completed the Temple at Jerusalem, thereby cementing their place in Judeo-Christian and Masonic history. We, as Free and Accepted Masons, venerate the story and legacy left to us by Solomon and his workers. However, as many Masons know, there is another character of singular importance - that of Zerubbabel. It was Zerubbabel who, according to Biblical interpretation, led the rebuilding of the Temple, keeping the dream of Solomon alive. He is often regarded as a builder and visionary, having taken up the banner that Solomon left behind.

Masonry has its Solomons - those people who have built Masonic organizations from the ground up; men like Walter Fleming and William Florence, who started what would become Shriners International, or J. Raymond Shute, who brought several Masonic organizations to America from England. The average Mason, however, is rarely in a position to build a brand new organization. It takes rare individuals to have the drive for building, as was displayed by King Solomon.

That is when we look to Zerubbabel, the rebuilder. Many communities around our Commonwealth have previously had Masonic Youth Groups. Evidence of their presence remains buried in closets, with costumes, regalia, and supplies. This is not all that dissimilar from the way Zerubbabel found the remains of the Temple. He saw a worn down edifice that he knew deserved far better. Now, YOU can be a modern Zerubbabel. All you need to do is look to the Masonic Youth Groups for a legacy that can be built for generations to come.

Have you considered working to reopen a Masonic Youth Group in your area? The Temple of our Youth is ready for another generation; it just needs a Zerubbabel to lead the way.

Posted by PA DeMolay News and Views at 10:12 AM