Congratulations are in order for the PA DeMolay Blog - this is the 300th post! In just a little over two years of existence, we have managed to bring you 300 separate pieces of wisdom, dementia, and random hullaballoo! So, what have we planned for the 300th post? Up until a few days ago, nothing. Yes, that's right. We planned absolutely nothing. Then, something really amazing fell on to my desk.

Last Saturday morning (which was April 21, 2012, for those keeping track), I received a call from my father who was attending an antique show in Erie. He had just purchased an old DeMolay item for me and was really excited about it. He described it as a collar in an old box that it had been mailed in. He said he recognized that the medal hanging on it as something I had, but since it was old, he figured I'd want it. The box stated that it came from the DeMolay Sales Division in Kansas City, MO, and was addressed to a Mr. James N. Wilson, who resided at 314 Sassafras St, Erie, PA.

Unfortunately, there was no date on the package, which left us wondering just when it was shipped. My dad, being the resourceful guy he is, hit the internet and started matching the stamps on the box to when the Postal Service had issued them. In total, the package cost eleven cents to ship and was stamped with two George Washington three cent stamps and one Teddy Roosevelt five cent stamp. This is where the story gets interesting! The Roosevelt stamp was produced in the late 1920's, while the Washington stamps were from the 1930's. Initially, this led us to date the box (and it's contents) to the early 1930's, but there is much more to the story! 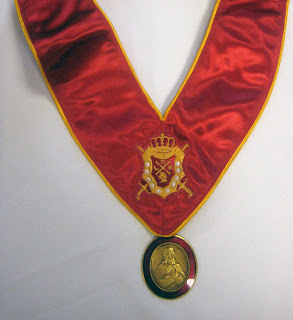 The collar, contained in the box, was unlike anything we'd ever seen before. It was made of red gross grain material, bordered with a yellow cord. On the collar was a patch with the DeMolay crest. Thanks to the DeMolay International Website we were able to date the emblem from being between 1932 and 1949. This gave us a date to start with, as we now know the item had to be from after 1932. The medallion hanging from the collar should be familiar to almost every DeMolay - it's the same medallion that hangs from the yellow cordon of a Chevalier. That gave us our next stop, which was another visit to the DeMolay International Website, where we looked up the history of the Chevalier.

According to that site, the Chevalier Degree came about as an alternative to the Legion of Honor that could be bestowed upon Active and Senior DeMolays, whereas the Legion of Honor was reserved only for adults.The fruits of this labor came together in 1936, when "Dad" Land himself started nominating people for this new and prestigious honor. The first Chevaliers were given at Mother Chapter in Kansas City, MO, on June 2, 1937. With this information, we can now hazard a guess that the box is from the late 1930's - obviously after "Dad" Land conferred the first Chevalier in Missouri. 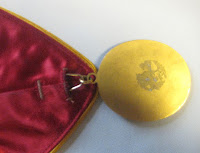 The last tidbit we could use to date the item was the name on the box - Mr. James N. Wilson. The name didn't ring any bells for us here at the PA DeMolay office, but once again the internet proved a valuable resource. A quick search revealed that we have talked about Mr. Wilson one other time on this very blog - when we discussed the case of the missing Founder's Cross. Aha! So, "Dad" Wilson was a well known man who had even caught the eye of Frank Land himself! Unfortunately, we don't know much about "Dad" Wilson, so it seemed I was once again stuck. 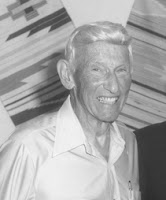 On a hunch, I plugged Mr. Wilson's name in to Google to see if I could find an obituary or any other information. Low and behold, a link came back from a university in California that had a scholarship named after a Dr. James N. Wilson - who was originally from Erie, PA! The site contained a short biography, stating that Mr. Wilson was born in 1915 in Erie, went to Edinboro University (my alma mater), and entered military service during WWII. After the war, Wilson earned his doctorate and began teaching collegiate geography in California, where he would remain until his death in 2003. I thought that I had solved the mystery and figured it all out - but sadly, there were some holes in my research.

First, the James N. Wilson I found was born in 1915, making him 22 during the time that "Dad" Land would have started presenting these awards. That means that this James N. Wilson was probably not the same person that "Dad" Land presented the Founder's Cross to in 1939. Darn! So, who was James N. Wilson if not this doctor living in California? I thought about the problem and did one more internet search, this time over at ancestory.com. 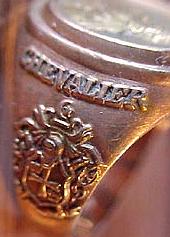 Unfortunately, all of this research has left us more questions than answers. Was this an original Chevalier collar and set, or was the collar for something else (such as an officer's collar) to which the medallion had been attached at a later date? Why was James N. Wilson so well known? Did "Dad" Land award the Chevalier to James N. Wilson, Sr., or was it awarded to his son, or even someone else? Our research will continue as we learn more about this interesting relic of DeMolay from the early days.

The collar, medallion, and box, were graciously donated by my parents, David and Deborah, and will be on display in Memorial Hall at Patton Campus for all to enjoy. If you happen to know any more about this piece, please drop us a line and let us know!

How's that for a 300th post? I hope you found it interesting and perhaps even a bit helpful. Check out your old regalia rooms and see what you can find out about the history of your Chapter!

Posted by PA DeMolay News and Views at 10:27 AM