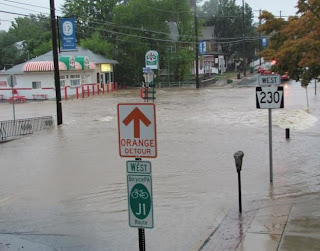 For those who haven't heard, Central and Eastern Pennsylvania have been experiencing severe flooding in the last twenty four hours. We've been alerted that several of our Brothers in Susquehanna Chapter have been evacuated from their residences and moved to safer ground. Here in Elizabethtown, downtown was flooded pretty severely, but thankfully Patton Campus has remained relatively unaffected (excepting for a wet room or two in the basement.) For those of you that have been to Elizabethtown, I have posted a picture of downtown to show the flooding. We ask that you keep all of your DeMolay Brothers in your thoughts and prayers.

Now, on to the real article for today!

This weekend your State Officers and several Advisors will be heading south to Alexandria, VA, to participate in the Mid-Atlantic Tournament of Champions, otherwise known as MATOC. Just what is MATOC? It is a ritual tournament organized by the Jurisdictions composing Region II of DeMolay International. If you don't know what Region II is, you can read some of our older blog posts. For now, all you need to know is that it is a part of DeMolay International consisting of the Jurisdictions of PA, NJ, NY, VA, DE, MD, Nation's Capital, Ontario, and Italy.

Now, I'm betting you're wondering what a ritual tournament is? The one thing that sets DeMolay apart from most other youth organizations is our ritual. While some of our members find it boring, many more find it interesting and want to learn and participate in its performance. Events like MATOC provide a standardized system for judging and scoring how well a person knows and presents their part. For instance, you can compete by knowing and presenting three different Preceptor parts, or by performing all of the Chaplain's prayers. If you've never attended an event like this, it is an experience you won't want to miss.

Head on over to the MATOC website for more information!