I'll admit it. I'm a history nerd. I enjoy learning about the past; finding out about how people lived, what they would have been like, and how their daily lives were. This week has been a great one for me in regards to this enjoyment. Thanks to a link my father sent me, I've spent several nights poring through old newspapers from the turn of the century. I read about the founding, height, and steady fall of fraternalism in the United States. I also spent some time reading about the early days of DeMolay in Pennsylvania. That's when I managed to make a discovery.

Since I took over the PA DeMolay website, which was roughly three years ago, there has been one glaring hole in our historical section. In 1937, a man named Arthur S. Rodeniser was named Executive Officer of Pennsylvania DeMolay. That pretty much summed up everything we knew about "Dad" Rodeniser. When I first went in search of a photo of him a couple of years ago, I found a newspaper article from the 1920's that mentioned in his name in conjunction with the Grand Commandery of Pennsylvania. That led me to believe that he was probably involved in that group to some extent. However, much beyond that, the information I could find was limited. I let the missing information slip to the back burner, but I never forgot that we were missing a portrait and information on one of our past EO's. 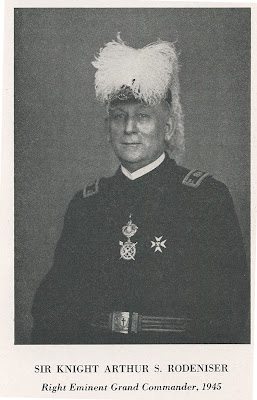 So, this week, as I'm going through old newspapers, lo and behold, I come across his name! What luck! After a quick search or two, I found out that "Dad" Rodenhiser was Right Eminent Grand Commander of the Grand Commandery of Knights Templar of Pennsylvania in 1945. Eureka! Now that I had some information about him, I could dig further. I remembered that the Grand Commandery office, in Philadelphia, had recently been remodeled, and that a portrait of every Past Grand Commander hangs on the wall there. I called the Grand Recorder who confirmed that it was the right fellow and that he did indeed have a photo. He offered to send me a copy of the proceedings (like the minutes a Scribe takes) from the year that "Dad" Rodeniser was Grand Commander. I received them in the mail yesterday. Not only are they a valuable piece of information, they had a great picture of "Dad" Rodeniser!

Not wanting to miss any good information, I started to dig through the book, looking for any other details that might be useful. In his report to the Grand Commandery, "Dad" Rodenhiser stressed the importance of DeMolay in Pennsylvania and encouraged all the Commanderies to sponsor a DeMolay Chapter. It was obvious that he was a huge proponent of the program! The other important tidbit that this book contained was a list of the Past Grand Commanders and their years of service. Beginning with "Dad" Rodenhiser, I worked backwards, looking for important names. The next name that caught my eye was Louis U. Strassberger, another Past Grand Commander, who served as EO at the same time as "Dad" Rodeniser. I see that confused look on your face! Let me explain.

You see, in the early days, Pennsylvania was a rather large state that didn't have great means for travelling across it. It was thought that a single Executive Officer wouldn't be able to manage DeMolay on both sides of the State. Therefore, PA was broken up into Eastern and Western Jurisdictions. "Dad" Rodeniser would have served the Western half of the State, while "Dad" Strassberger kept an eye on the Eastern side. PA DeMolay would actually continue like this until World War II, when PA DeMolay was closed for a few years because of the war. After the war was over, transportation had improved, and a single EO was able to handle the entire Commonwealth. Now, back to our regularly scheduled story. 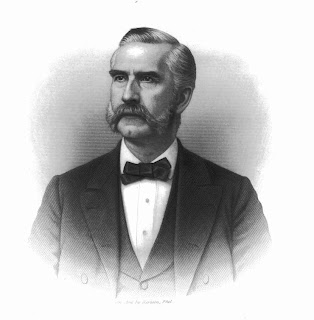 Continuing down that list of  names, I found another important one. In 1923, "Dad" Ralph C. Mineheart, the man who brought DeMolay to Pennsylvania in the first place, served as Grand Commander. We knew that "Dad" Mineheart was a well known figure in the Grand Commandery, and it's quite possible that he and "Dads" Rodeniser and Strassberger would have been friends and talked about the future of DeMolay in Pennsylvania. Thinking my search was complete, I readied to close the book, when one last name caught my attention - Thomas Ranken Patton.

Yes, that Thomas Ranken Patton - the founder of the Patton School and the namesake of Patton Campus here in Elizabethtown. He served as Grand Commander in 1921, just two years before "Dad" Mineheart. That means there is certifiable proof that "Dad" Mineheart and Thomas Ranken Patton not only knew each other, but were probably pretty well acquainted, as both were high ranking Templars. It's interesting to think that in 1921, as DeMolay was coming to Pennsylvania, and Thomas Ranken Patton was preparing to fund his school, that Patton was building an institution that would later house and continue the dreams of "Dad" Mineheart. While we know Patton would have loved his school, I like to think that he would approve of it being used to further the causes championed by Ralph Mineheart.

So, with lots of research complete, I headed to the website to put up the picture of "Dad" Rodeniser and to update the information on our Past EO's. After getting everything just right, I scanned the page one more time for any changes. I realized that one EO, "Dad" William Gregg, didn't have any information under his name. It was quite obvious from his photo that he was a Past Potentate of Syria Shrine in Pittsburgh. I recalled that "Dad" Labagh has a book about the history of Syria Shrine, which I retrieved from the shelf. I flipped through the pages and found the picture of "Dad" Gregg, who served as Potentate in 1946. This was great, as I could now add just a bit more information to the site. Again, I was ready to close the book, when a name nabbed by attention. The Potentate of Syria Shrine in 1947, the year after "Dad" Gregg held that position, was none other than "Dad" Clarence Head, Past EO of PA and Past Grand Master of DeMolay International (not to mention his time as Secretary General of DI after the death of "Dad" Land.) So, it would appear that we have two more men, who were most likely good friends, who helped to guide DeMolay in Pennsylvania for several years. I'm sure "Dads" Gregg and Head spent many nights talking about DeMolay and planning for its future.

These men took control of DeMolay in Pennsylvania and steered a course for many years to come. While we can't say for certain if they had "Unplugged" as advisors, we do know that without them PA DeMolay wouldn't be what it is today.

Posted by PA DeMolay News and Views at 9:52 AM