Last weekend at PA DeMolay's Superhero School event we held the Community Service competition (among others.) This is the first time that PA DeMolay has held the competition at an event other than Convention in quite some time. There were some issues with notification of the competition, but that aside, those who competed did a fantastic job.

Once of the questions we often get asked is "Just what is my Chapter supposed to do for the Community Service competition?" Why, that's a fabulous question Johnny! To answer your query, I'm going to turn to the folks at Allentown Chapter, who did a fantastic job at putting together their presentation.

Allentown, under the direction of Bro. Carl Blew, built a nice a display out of some card stock and printouts. Nothing fancy or costly, but very functional. The display showcased how Allentown celebrated donated foods to the Allentown Ecumenical Food Bank. This wasn't any old food drive however! The Chapter teamed up with Arbor Insurance Agency, who supplied the members with eco-friendly "green" bags. These bags were created with the environment in mind, and are reusable. The Chapter members were asked to fill the bags with food, and then return them to the Masonic Temple. Pretty simple, huh?

Allentown didn't stop there, however. They got the local TV station to run a promotion for their food drive and posted flyers about town asking for support. In all, 10 DeMolays, 5 Advisors, and 15 hours of service amounted to several LARGE (and we mean big!) boxes of food being donated. One member, Andrew Barber, went even further by obtaining and decorating a box for the drive to encourage participation. 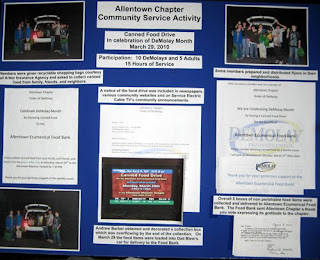 So, the event was successful, but how does that tie into the competition? The Chapter took lots of pictures of the event, and made sure to get copies of the letters and flyers they sent. They then put all of that information on a nice, well constructed, and informative display that they used during the competition. It really is that easy!

What did your Chapter do for Community Service last year? Did you participate in the competition?

P.S. - I know this post was a day late. How do I respond to such accusations? Simply put... *insert Newsman voice here...* deal with it!
Posted by PA DeMolay News and Views at 10:20 AM