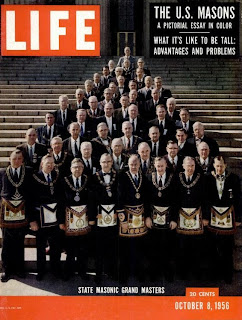 America in the 1950's is an interesting subject. Eisenhower sits in the White House, using his popularity and skills from the military to gain the seat. The Cold War is getting underway, and the Russian threat begins to loom. America is entering a new age of prosperity. After World War II members of what has become known as the "Greatest Generation" begin to build anew, rekindling the idea of the American dream of the nuclear family, and the white picket fence. These were men of courage, men of character, and in many cases, men of Freemasonry.

In 1956 LIFE Magazine was one of the most widely read publications in the United States. It was in October of that year that the editors of the publication decided to do an in depth article about Freemasonry. That issue of Life Magazine has become a great source of pride in the fraternity, as it shows Freemasonry at the top of it's game. Not only is it an interesting read, but it has great, full color, pictures of the fraternity from it's heyday. The issue is widely sought after, and can be pretty tough to come by. But not anymore!

Thanks to Google, you can now peruse the back issues of LIFE Magazine for free... including the fabled article on Freemasonry. Check it out here to check them out... http://books.google.com/books?id=R1cEAAAAMBAJ&source=gbs_navlinks_s#all_issues_anchor. DeMolay even get's a big mention, and a nice photo. 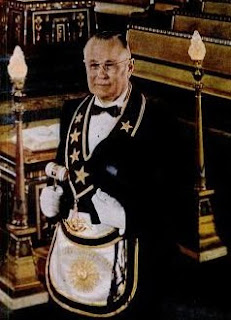 With all the coverage of Freemasons, Dan Brown, and new books about the Fraternity, not one of them has given our organization this kind of in depth and positive look. So, what are you waiting for? Check it out!
As a side note, you'll read that there are only 49 Grand Masters on the cover. Who is missing? Pennsylvania of course! Our Grand Master is depicted by himself on a two page spread, detailing the Egyptian Room at the Grand Lodge in Philadelphia. He is pictured on the same page as the Soverign Grand Commanders of both the Nothern and Southern Jurisdcition, the Grand Master of Knights Templar, and the General Grand High Priest of the General Grand Royal Arch Chapter. He is the only Grand Master whose photo appears on this centerfold page. Now that's what I call special treatment!

Posted by PA DeMolay News and Views at 11:03 AM