A History of the "Keystone Crusader"

We have sometimes been asked by the State Officers, "Why do we still have to print a monthly publication?  Couldn't we just use email, or a service like Constant Contact?"  There are a lot of reasons, actually, and some have to do with who does and doesn't have internet access, or, if they have it, when they actually make use of it.  In truth, the most reliable form of communication is still a basic printed newsletter or flyer, published on a regular monthly (or more often) schedule.  But there is another reason-- and it has to do with history.  In the future, when someone wants to know what happened in Pennsylvania DeMolay, the first place they will look is in the history file of the Keystone Crusader.  Yes, there is a fairly complete (we think) history file of all, or at least, most of the issues since it began publication.  And it is very interesting reading, for someone who wants to know what happened in the early years of DeMolay in Pennsylvania, and to see how the organization evolved. 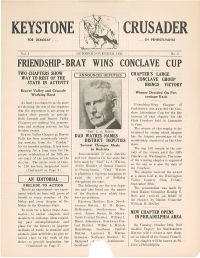 We don’t know why the name was chosen when plans began to formulate for the issuance of a statewide newsletter in 1931, but it’s not difficult to surmise that combining the “Keystone State” of Pennsylvania with the image of a mounted Knight Templar participating in the medieval Crusades to the Holy Land was the most popular among a list of possible names. Or, perhaps the creators were well aware of the use of an architectural keystone, and expected it to be the most important stone in the PA DeMolay structure. What we do know for sure is that, after 3 years of discussion and planning, the first issue of the Keystone Crusader, Vol. 1, No. 1, was finally published in October 1934.
It was initially a very slick publication, professionally printed by an offset process on glossy paper, and funded by subscriptions paid by Chapters and individuals. It looked great, but it didn’t have much useful or interesting content in it. By 1936 the staff had had their fill of trying to get both news-oriented cooperation and subscriptions from the Chapters, and in an editorial in their last issue, they all resigned. 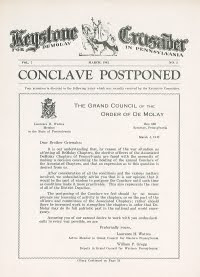 The publication resumed a year later in 1937 and was published sporadically until Vol. 7, No. 2, March 1942, when World War II interrupted all DeMolay activity for several years. 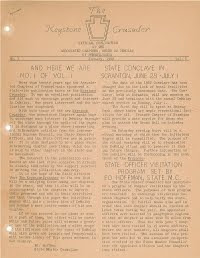 It wasn’t revived until 20 years later, in 1962, when, inexplicably, they went back and started with Vol. 1 No. 1 again, but this time it was a production of a publications committee assigned by the State Master Councilor. Sometimes it was produced on a ditto machine (advisors and teachers will remember the unusual light-headed feeling and the unique smell of the ink) and other times it was printed on a mimeograph machine (a very cheap direct-impression ink printer) and later by photocopy. Publication apparently stopped in 1967, and it was replaced by a newsletter produced by the Executive Secretary. 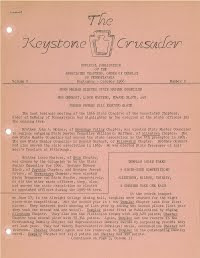 In 1978 publication resumed again, without volume and issue numbers, but it was published quarterly very consistently until the early 1980’s. In 1982 the Keystone Crusader began a bi-monthly schedule when the State Officers were given the responsibility for its complete production. 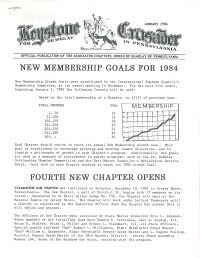 In the 1990’s the Keystone Crusader began a monthly schedule which, while not always fully adhered to, has improved the communication about programs and activities in PA DeMolay. The look of the publication changed often, as the State Officers had different levels of typewriter and, later, computer 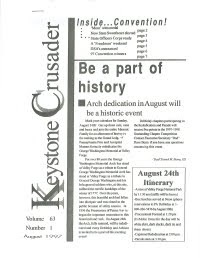 competence, and variable sense of design. 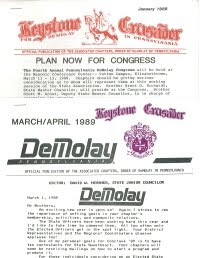 At the beginning of the new millennium standards were established that kept the look of the publication consistent, and it changed less frequently. 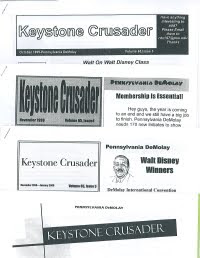 Printed and mailed copies continue to go out in black and white, but a full color version is posted on www.pademolay.org each month.   As of this date, the publication has not been regularly distributed by email, but you can be sure that the Keystone Crusader will continue to evolve to best serve the interests of Pennsylvania DeMolay. 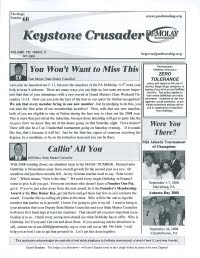 In our constantly evolving world, it's great to see that traditions like the Key Cru can still be meaningful and have an impact.
S&F,
"Dad" Tom Labagh, EO for PA
Posted by PA DeMolay News and Views at 8:45 AM