Films Every DeMolay Should See: Apollo 13 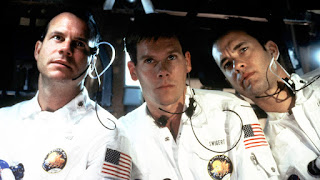 "Houston, we have a problem." This phrase is one of the most famous movie lines in history, and is still used in everyday life today. The film that made it popular; Apollo 13. I chose today to write about this film because on April 11th, 1970, the Apollo 13 mission to space launched, which was intended to be the third to land on the moon. Unfortunately, the mission had to be aborted due to an oxygen tank exploding.

The film, based on true events, stars Tom Hanks, Kevin Bacon, Bill Paxton and Gary Sinise, and was released in 1995. Apollo 13 shows the mission at hand, lead by Jim Lovell (Tom Hanks) who had been part of a previous mission to the moon, but wanted to walk on its surface. Jim and his team launched Apollo 13 on April 11th, and 3 days into the mission an oxygen tank explodes, creating panic in being able to continue their mission and make it home safe.

So what makes this a movie that every DeMolay should watch? The film demonstrates the teamwork that it took in order to get the members of the mission home safe. Failure truly wasn't an option, which the control team at NASA took seriously in devising a plan to save the three men on the mission. As much as the three men on board wanted to point blame and give up, they knew that they needed to stay strong and find a way to get through it in order to see their families again.

This film is a classic, and truly is one of my favorite Tom Hanks movies of all time. If you haven't seen it, I hope that you will.

Posted by PA DeMolay News and Views at 12:55 PM