But... but, they aren't REAL DeMolays!

How to Tell the REAL DeMolays
from the Fake Ones

The old argument about whether DeMolays who come just for sports are "real DeMolays" just never seems to die.  I have been hearing it since I was initiated in 1970.  It is as poor an argument now as it was back then.

It always seems to fall as a harsher judgment on the athletes who are usually judged in the midst of their most competitive mode, but who, in truth, can be just as good at ritual, fund-raising and service as the other guys when called upon. 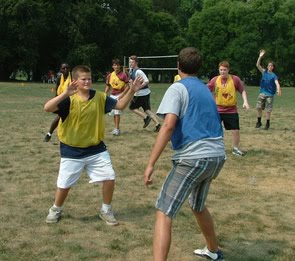 Each Chapter has its own criteria for filling its team roster.  Some want winning athletes.  Others want "full participants" who also want to play sports.  It is each Chapter's decision-- and some establish their criteria each season, while others establish a policy through their advisory council, and others create bylaws to govern themselves.  As long as the method is fair, any of these methods is fine.

It is expensive for some Chapters to travel long distances, so sometimes we only see the really competitive side of a Chapter, for instance, because they value a basketball championship or a volleyball championship as part of their membership recruiting program the rest of the year.

If  had envisioned a program where every young man came to every activity and every DeMolay was an officer, we would never have grown in the early years.  The Order of DeMolay grew because it offered so much, to so many people.  Sadly, it has changed over the years to offer a complete program to just a few members of each Chapter who can become officers, and Advisors tend to value more, those who embrace the whole thing.

But like the Masonic Fraternity, DeMolay offers a wide variety of activities to those who choose to be involved in them.  Only 10% of Lodge members attend meetings, but they ALL value their membership.  That is because membership is more than just attending-- it is about the ideals of the organization.

DeMolay is no different than Lodge, in that respect.  And our casual Lodge members and DeMolay members look to the officers for guidance and role models, and hopefully find something they like to see.  It isn't easy, but our goal, as Advisors, is to teach our members to accept ALL DeMolays as equal members, simply for the fact that they share the common bond of membership, given to them as a result of taking the same obligations as all DeMolays around the world.

Posted by PA DeMolay News and Views at 5:58 AM