Last week, "Dad" Tom Labagh posted on Facebook about how many of the new 33rd Degree Nominees from Pennsylvania were involved in DeMolay. Here's a screencap of his of his post: 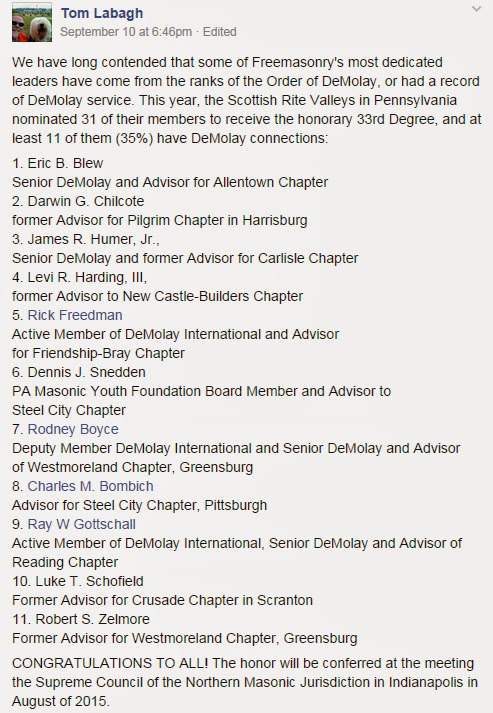 As you can see, the above is a pretty impressive list. This got me thinking about how many of our current national Masonic leaders are Senior DeMolays or have been involved in the DeMolay program:
... and that's just a short (and surely incomplete) list of national leaders! Nearly every sitting jurisdictional Masonic leader in Pennsylvania has had some connection to the DeMolay program - whether he be a Senior DeMolay, a member of an Advisory Councilor, or a recipient of the DeMolay Legion of Honor.
The obvious question to ask is "What does this mean for the DeMolay program?" I think it's safe to say that there is a high correlation between involvement in DeMolay and involvement in Freemasonry. It's also pretty safe to say that the leadership skills taught in DeMolay provide a solid foundation for the skills required to be a leader in the fraternity on many different levels.
Pay attention to your DeMolay training today, as you never know where it could lead you tomorrow!
Frat! ~ "Dad" Seth Anthony
﻿
Posted by PA DeMolay News and Views at 9:04 AM