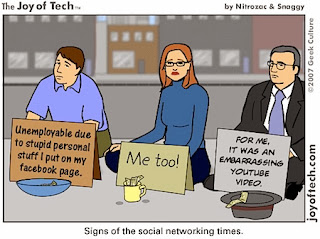 In light of recent news, both internally in DeMolay and externally in the general public, the staff here at the PA DeMolay office discussed creating a social media policy for DeMolay in Pennsylvania. After some debate, it was concluded that best way to create this policy would be to include those that it would directly impact - namely the DeMolays and Advisors.

During our recent flag football tournament, a workshop was held to develop a social media policy. Every person attending the event was invited to participate. More than 50 DeMolays and Advisors gave their thoughts and input as to what they thought was important in a social media policy. After more than an hour of work, the group came up with some general statements, that will be later worked into an official policy. The statements are as follows:


Obviously this is not a complete policy, but it's a good start. The group worked very hard and great discussion between DeMolays and Advisors took place. I would like thank everyone that participated - you made a direct impact on the way PA DeMolay operates!
If you are a DeMolay or Advisor from Pennsylvania, and you would like add your two cents, comment on this post!
Frat! ~ "Dad" Seth Anthony
Posted by PA DeMolay News and Views at 8:51 AM