As I stated in an earlier post, I'm in the process of updating the PA Masonic Youth Foundation website. As with any site that has been online for years, it has a myriad number of links and articles, some that seem to have been lost to the vast warp of the net. One of the more interesting one's (to me anyways) deals with the history of Thomas Ranken Patton, the namesake of the Masonic Conference Center at Patton Campus. Anyone who has been to Memorial Hall knows the familiar portrait of a stately elderly man with extraordinarily large mutton chops. This painting keeps watch over the main building of the facility that would be his legacy. But, just who was Thomas Ranken Patton?


Thomas Ranken Patton was born in 1824, in Crindle Cottage, Crindle, District of Newtown-Limavady, Parish of Tamlaghtfinlagan, Barony of Kennaught, County Londonderry, Ireland. He never knew the exact date of his birth, and adopted December 24th for the purpose of record and celebration.

Brother Patton was an importer and dealer in fine family groceries for 30 years, and was a founder of the Union Trust Company in 1882. He was a Director of the Huntingdon and Broad Top Railroad, and a Director of the Electric Cable Construction Company. He was also a member of the Board of Managers of the Masonic Home of Pennsylvania, est. 1871, (which merged with the Masonic Villages of Pennsylvania in January 2004.) 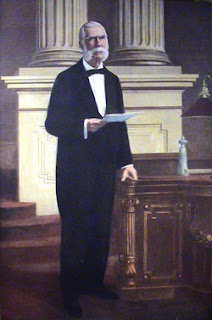 He married Miss Ellen Hunt Graham of Tazewell, Tennessee, who was a confederate Army sympathizer. They were married at the West Spruce Street Presbyterian Church in Philadelphia on April 2, 1868. His only son, Thomas Graham Patton, was born on March 21, 1869. His wife died just 6 days later, on March 27th. At the age of 7, after an attack of scarlet fever, followed by diabetes, his son died. Less than two years later the heartbroken Mr. Patton sold his grocery business to retire, but became active in the investment of his wealth, and in Masonic circles. He was elected in 1873 and served as Grand Treasurer of the Grand Lodge for 34 consecutive years, until his death.

During his lifetime he was described by R. W. Past Grand Master Michael Arnold as "a courtly gentleman of polite and dignified manner, tall and erect, commanding respect by his presence." On December 27, 1889, he donated to the Grand Lodge the sum of $25,000 to create the Thomas Ranken Patton Memorial Charity Fund, in memory of his late wife, to be used for "the relief of poor but respectable widows" of Pennsylvania Masons. He later added the sum of $125,000 to the fund. Patton's example established a precedent that was followed by several other well-to-do Masons of his time.

In December 1900, the Grand Lodge elected him an Honorary Member, an honor only conferred before that time upon Brother George Washington and Brother the Marquis de LaFayette.

He died in Philadelphia on September 13, 1907, and his formal portrait was immediately thereafter commissioned, as it was a custom, to that time, not to hang portraits of living Grand Lodge officers in the Masonic Temple. It was presented to the Grand Lodge in 1908. His extensive estate consisted of shrewd stock and real estate investments, and more than half of it, valued at approximately $1,040,000 after taxes, was give to the Grand Lodge for the establishment of a boarding school for male orphan children of Master Masons, in memory of his son, Thomas. It would later be established as the Thomas Ranken Patton Masonic Institution for Boys. 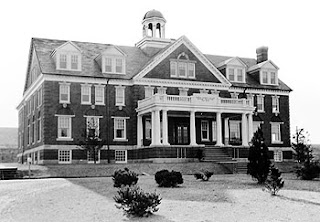 On October 6, 1923 the cornerstone of Patton Hall was laid, and the school opened in January of 1925 with an enrollment of 14 students. The main educational building, Memorial Hall, opened in September 1926 and included the machine, carpenter and brick shops and the classrooms. A second dormitory, Ranken Hall, was opened in 1928. The school was dedicated, in Patton's words, to "...the development of capable industrious and honest men" and for 50-years it provided vocational, moral and religious training to all students.

Closed in 1977 due to lack of enrollment, the Grand Lodge subsequently approved the renovation and conversion of the facility into the Masonic Conference Center--Patton Campus which is the headquarters and center of operation of the Pennsylvania Youth Foundation, which was established with a purpose consistent with the aims of Brother Patton, to realize more fully the potential of youth. We pay a tribute of gratitude and reverence to the memory of Thomas Ranken Patton for both his generosity and foresight to extend Freemasonry's charity toward youth.
Posted by PA DeMolay News and Views at 9:41 AM