"Do or do not, there is no try." That immortal phrase ws spoken by Yoda in Star Wars - The Empire Strikes Back. The character was just a work of foam and wires, voiced by Frank Oz. However, those words have never had a truer sound than in today's society. That simple line has become etched in the consciousness of the popular culture we currently live in and it is a valuable lesson for us all. It was this lesson that I took to heart.

A little over a month ago I was challenged to participate in a 5k with my girlfriend. She'd been wanting to run a 5k for a long time and it seemed that our calendars finally matched up and that I could be there to support her. I agreed to go to the race with her and help her in training. Then I said to myself "Self, why aren't you running the 5k too?" It was less than 30 days before the event and while I had been exercising more regularly, I didn't think I was in any shape to take on such a challenge.

I've always been a big guy. A little over a year ago I decided that I was as big as I was going to get. I weighed in at just under 290 pounds. A poor diet full of fast food and Masonic banquets, coupled with low physical activity got me to that point. I realized that something had to be done, so I started walking on a treadmill. At first, I could barely do 20 minutes. I couldn't even jog 4 miles per hour for 4 minutes straight. I was in pretty bad shape. But, I persevered and kept with it. I continued to work out regularly and watch my food intake. I counted every calorie that went into my body. While it was a huge pain in the neck, the weight started to come off. By January of this year, I was down 45 pounds and felt much better. I laid off of the exercise and stopped monitoring my food so closely. Come August, 10 pounds had crept back and my clothes were starting to feel a bit tighter. I went back on my diet and started exercising more regularly, just as I had been. Then, this 5K came up.

So, with all of that behind me, I decided that I too should try to run the race. The key word here is "try." For those who know me, I'm not an athletic person. Outside of some random activities at a DeMolay event, I haven't voluntarily participated in an organized athletic activity since the 5th Grade. This was a huge step for me. I told myself that as long as I really tried, I'd come out ahead. I signed up for the race and with less than 30 days to go, I started training. I bought the right equipment, including new running shoes. I then put them to work and got on the treadmill more often. I also ran outside, to get the feel of it. Before I knew it, race day was upon me.

When I lined up with the other competitors, several things went through my mind. Who else was doing this for the first time? What journey had brought them here? One woman was walking with cane, another man had a knee brace. Some people were warming up, while others were just chatting. Everyone was there for a different reason. I was there to prove to myself that I could do it.

As the starting gun went off, I charged forward, setting a good pace for myself for the first mile. Then the exertion set in and I varied my pace between walking and jogging for quite a distance. Whoever decided to make us run up steep hills is a torturer! Soon the end was in sight. As I dashed down a steep hill and turned the corner, the spotter told me the finish line was just ahead. I looked up a small incline which approached a straight away to the finish line. I briskly walked up the hill and then gave it my best, bursting forward to finish the race. I had no idea what my time was, I was just happy that I finished (and that I wasn't last.) My girlfriend had come in ahead of me, but not by much. I had done it! Trying had paid off. 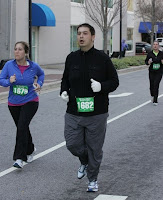 Today, the final results of the race were released. My time was 39:57 - just under 40 minutes, a number I could not have dreamed of! I ended 119 out of 216 competitors and came in 5 of 6 in my age group. I even managed to not be last amongst my peers!

As usual, you are probably wondering what this has to do with DeMolay. To answer that, I'm going right back to the first paragraph of this post - TRY. There are things in life that we think we are incapable of doing. Put in me in front of a room of a 1000 people and ask me talk and I'll be in my element. Ask me to do physical activity and I'm petrified. We have our comfort zones, but until we try to do something outside of the norm, we are never going to know what we are capable of. By simply trying to do something that you didn't think you could, you've already taken the first step in doing it.

Try to learn that ritual part word perfect. Try to live by the precepts of DeMolay. Try to take control of your Chapter and your life. If you never try, you're never going to succeed.

I tried and I'm glad I did.

Posted by PA DeMolay News and Views at 9:57 AM