DeMolay Week: Fun With My Comrades 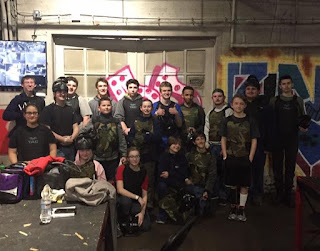 The following blog post is from Brother Mitch Holmes, PMC of Templar Chapter and State Senior Deacon for Pennsylvania DeMolay.

Are we limited to what we can do as DeMolay? The answer is most certainly no, we are not limited (unless you plan on something extremely dangerous or against insurance.) DeMolay is based from 9 young men who just wanted to have fun and build relationships. From that idea, we now have an international organization with over 3,000 chapters worldwide that was based off the idea of having fun and building friendships. Today, DeMolay is still the same. Although we have other aspects involved in DeMolay, we learn our leadership and skills through having fun in the organization.

The most fun I ever had in DeMolay was when my chapter planned an Air-soft Event. It was the first shooting based event I had been though with DeMolay. Yes, you might think it is a terrible idea for DeMolays to shoot one another with air-soft guns, but it’s basically the same as paintball, which has been common in DeMolay for years. After we presented the idea to our Advisory Council, it was approved and we started the planning process. When Bro. Chris Johnston and myself had originally planned our Air-soft Event, it was for the prospects we had interested in joining DeMolay. Due to our low chapter stats at the time, we felt it was necessary to have chapters and assemblies come to the event. We then invited the youth groups nearby. With an impressive turnout of 35 people, the amount of fun was endless. As we entered the arenas, most of us were scared and didn't know what to expect, but we felt safer because we all knew each other. By the time I had gotten out of the arena, I was immersed with the amount of fun that I had. I never thought you could have so much fun in DeMolay and that you were able to do events like that. When the night ended, everyone wanted to keep playing. Along with having fun, I later realized that the air-soft also consisted of leadership, communication, trust, and comradeship. All ideas that are based on our precepts.

Keep in mind, DeMolay is great for endless ideas. From going go-kart racing to camping trips, anything is possible in DeMolay. Without fun in DeMolay, we wouldn’t be the greatest organization in the world. During DeMolay Month, I encourage you to think outside the box and do something your chapter has never done before and enjoy yourselves as DeMolays.

Until then,
Mitch Holmes

Posted by PA DeMolay News and Views at 12:23 PM