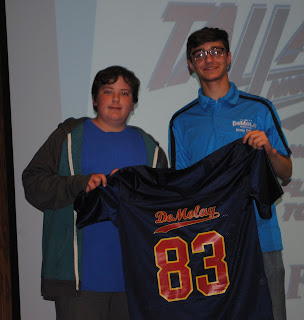 The following blog post is from Brother Kody Anderson, Region E Youth Representative and a PMC of Elizabethtown Chapter.

I joined DeMolay in September of 2014. Shortly after I joined, Elizabethtown DeMolay went to the Renaissance Faire. At this point, I didn’t really know anyone in my Chapter yet. I was just like any other DeMolay who had just joined, the one that wanted to talk and join the other members, but just didn’t know how to. After getting to the faire, everyone in my Chapter went their own ways, with their friends who they had known for quite some time already. Then there was me, not knowing where to go or what to do. Another DeMolay, who I didn’t know at the time, invited me to join his group. He had a couple of his friends with him, so I went with him, but I still felt a little out of place. As the day went on, I got to know these guys more, and by the end of the day it felt like we had been friends prior to actually getting to the faire.


When we talk about what DeMolay means to us, we often-times use the word “brotherhood.” When I was a new member, this word didn't really mean anything to me at the time, but another brother went out of his way and made me realize how important brotherhood is. I always think back on the time, and I often wonder whether or not I would be where I am at today if the meaning of “brotherhood” was not made clear to me. For me, brotherhood was not defined until another brother came along and defined it for me, and to this day I still believe that if this had not happened, I would not be as engaged with DeMolay. Recently, I have made it my goal to do the same for someone else. I want to engage with the new members, who may not yet know what we are all about, and show them the true meaning of DeMolay.
Posted by PA DeMolay News and Views at 1:15 PM