An Amazing Collection of Masonic Autographs

DON'T THROW ANYTHING AWAY! 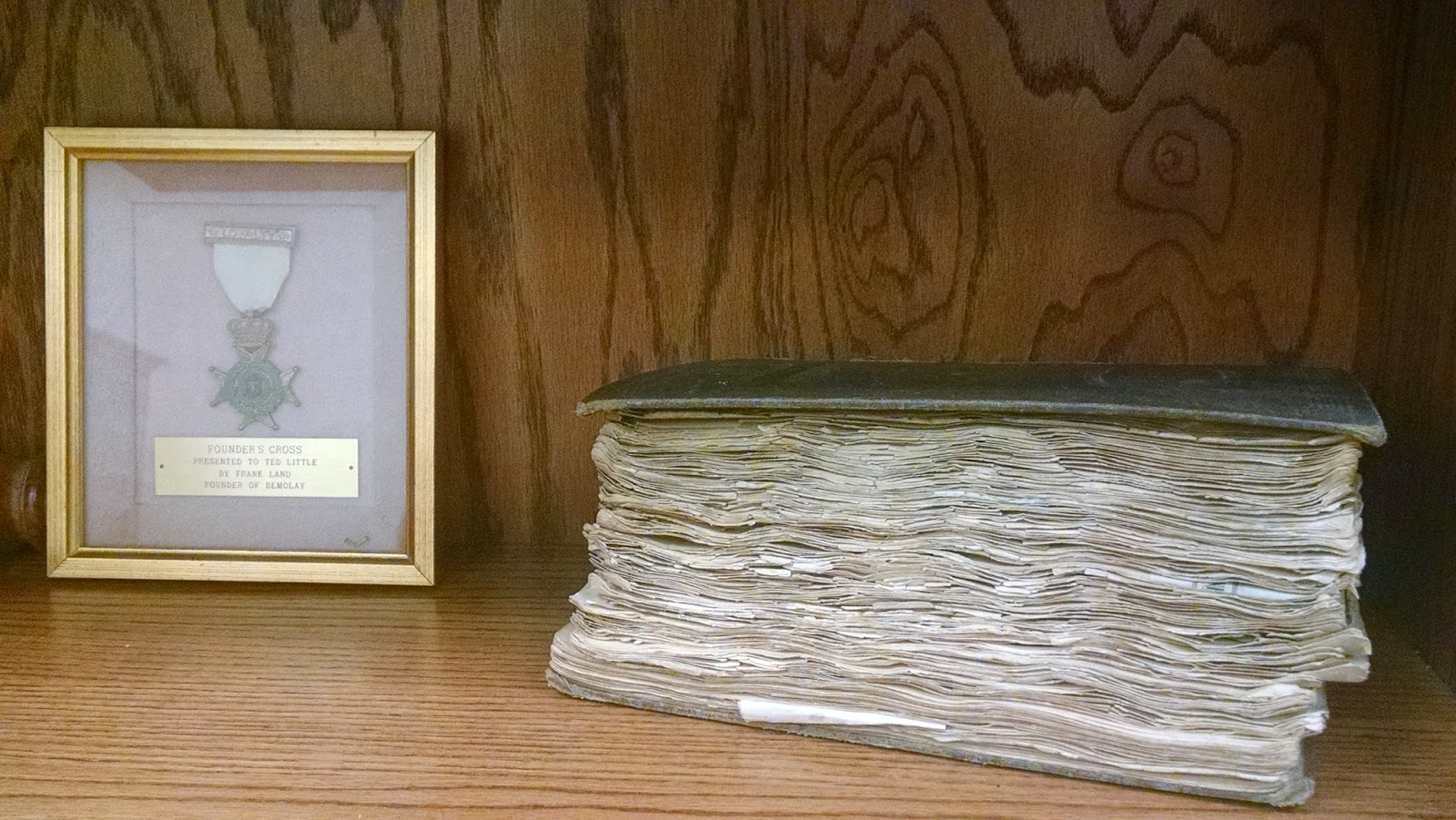 It is, quite clearly, the ugliest item on display at the DeMolay International Service and Leadership Center, in a locked bookcase in the "archive room." (This is the room with several locking book shelves that hold copies of all of the Proceedings of the Grand and Supreme Councils: Statutes, Bylaws, Rules and Regulations; and one copy of most of the DeMolay Grand and Supreme Council publications and magazines produced since 1919.) 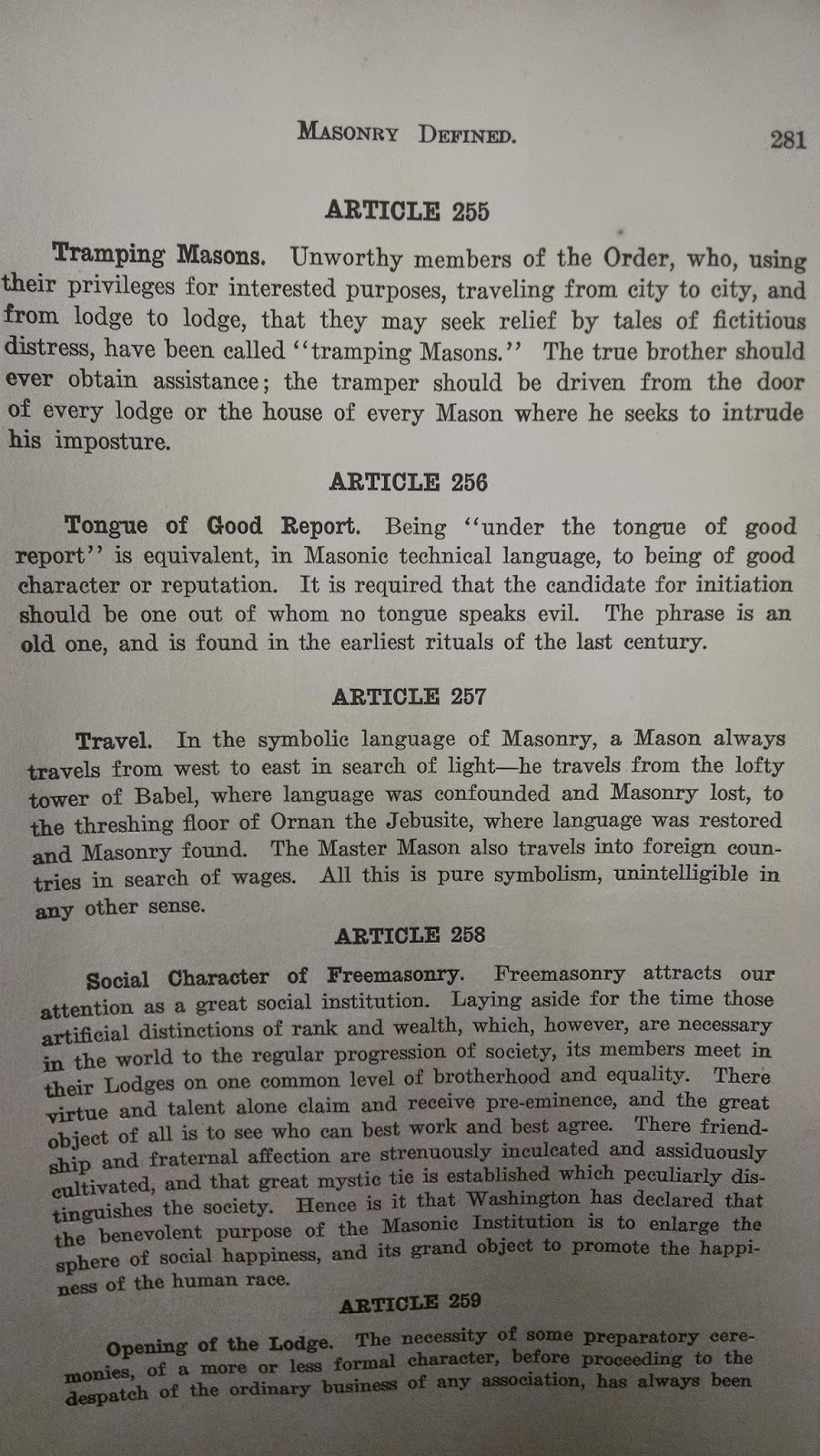 ...which was an encyclopedia of Masonic facts, figures, definitions, philosophy and esoterica.

The volume has obviously been very wet, and in the drying process it expanded and snapped its binding. 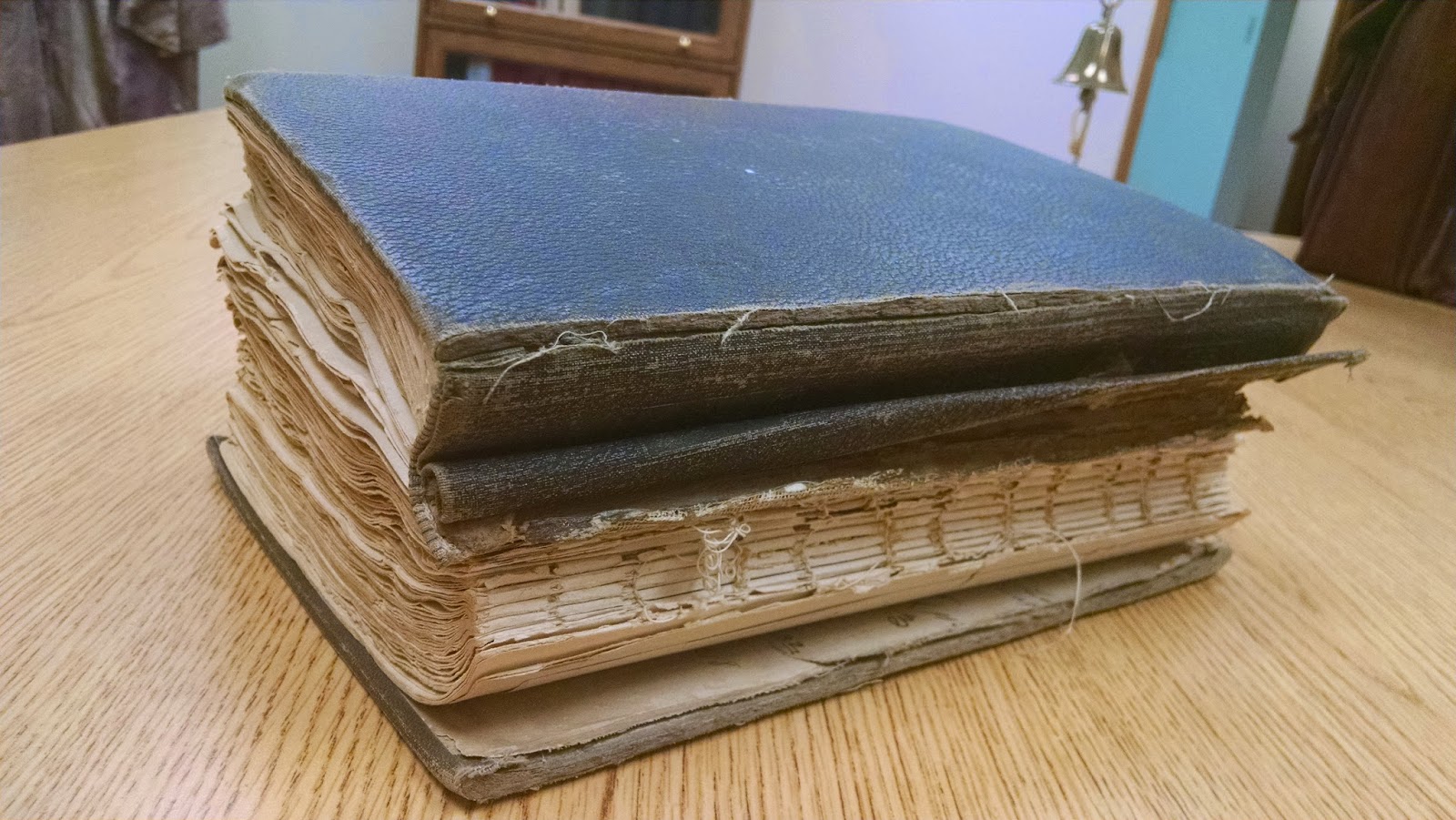 But this isn't just any old Masonic tome full of dry wisdom and enlightenment.

It is the Autograph Collection Book of Bro. Gustav E. Venaas, of St. Paul, Minnesota, whose DeMolay letterhead above identifies him as an Advisor for St. Paul Chapter, and whose hobby is collecting autographs of Masons.

And what a fascinating collection it is!  Brother Venaas was an intrepid collector, gathering autographs of prominent Freemasons everywhere he went.  He also obviously wrote to celebrities who were Masons, and asked for them to send him an autograph.  In this book, he had pasted autographs, photos, news clippings and anything related to the subjects who signed cards for him. 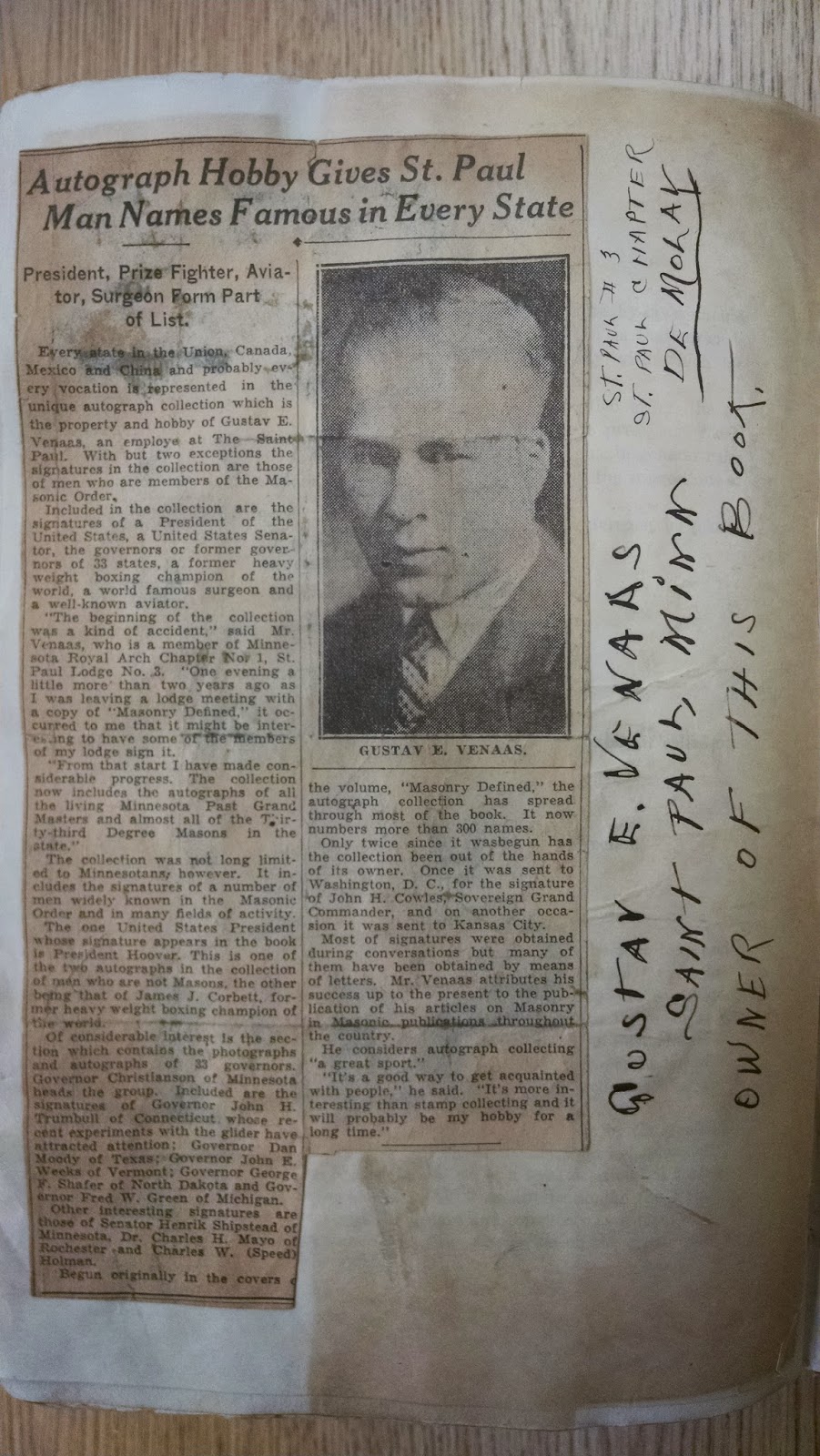 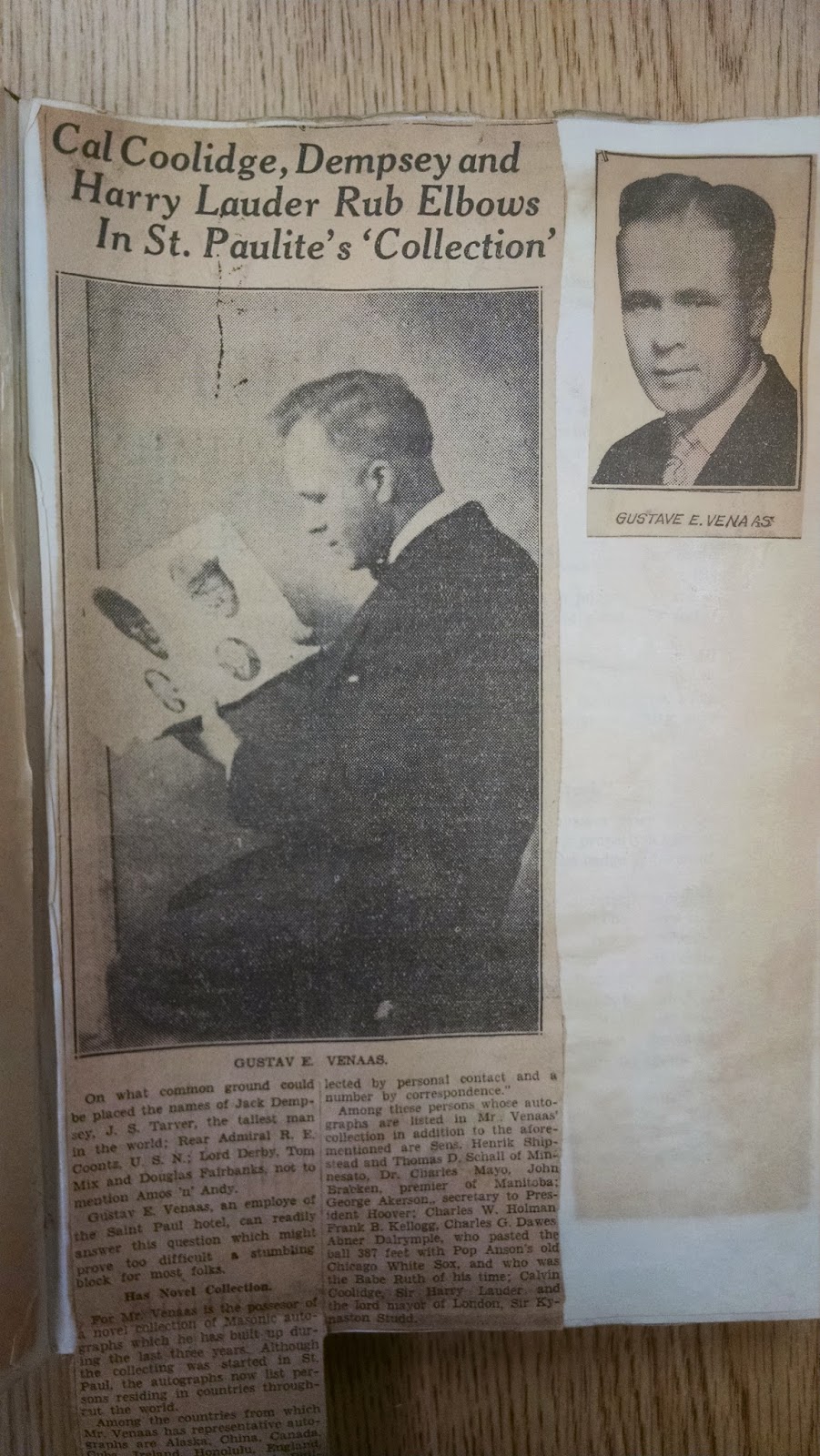 Brother Venaas liked a little bit of fame, himself, because he was the subject of several newspaper articles because of this unusual collection and his success in acquiring a number of impressive names, all of whom are Freemasons.  And he didn't limit himself to Americans... he also wrote to famous Masons in Europe, and in Central and South America! 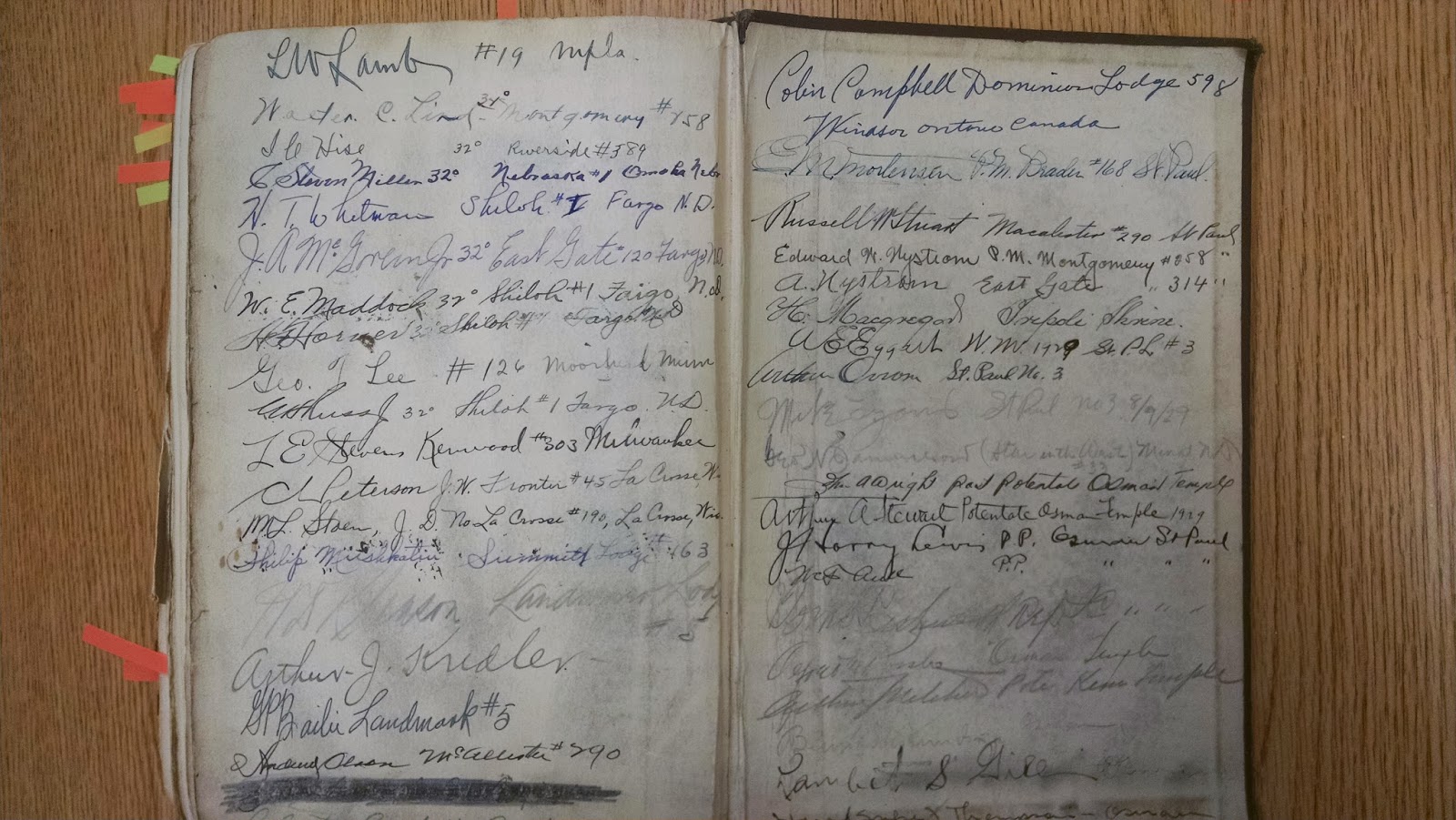 Some of the pages are filled with signatures acquired at an event, and include prominent Masons who were present for the meetings.  These were the movers and shakers of Freemasonry in the 1920s.

Obviously, as a DeMolay Advisor, he was very proud to have collected signatures from "Dad" Frank S. Land, the Founder of the Order of DeMolay... 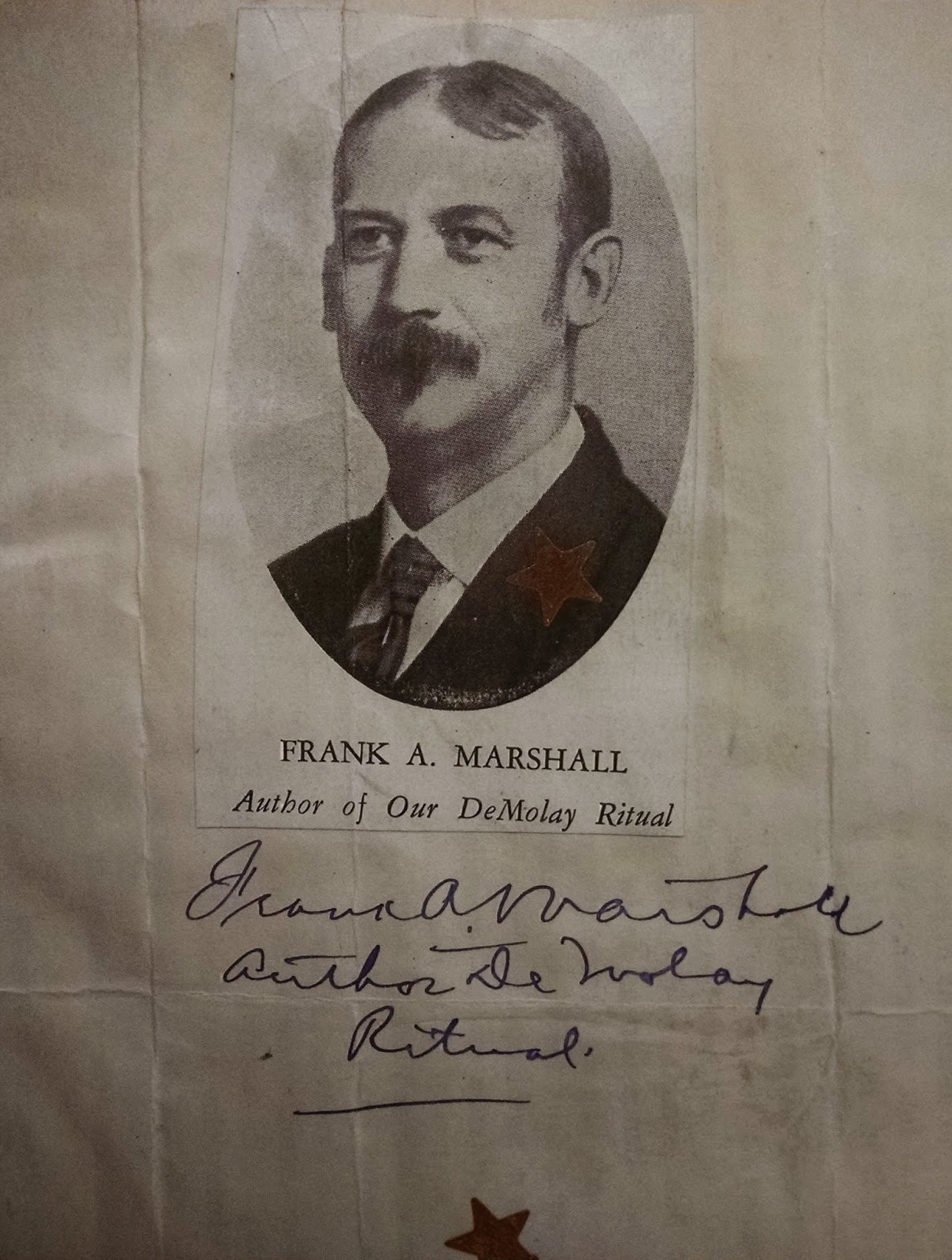 ...and the signature of "Dad" Frank A. Marshall, Author of the DeMolay Ritual... 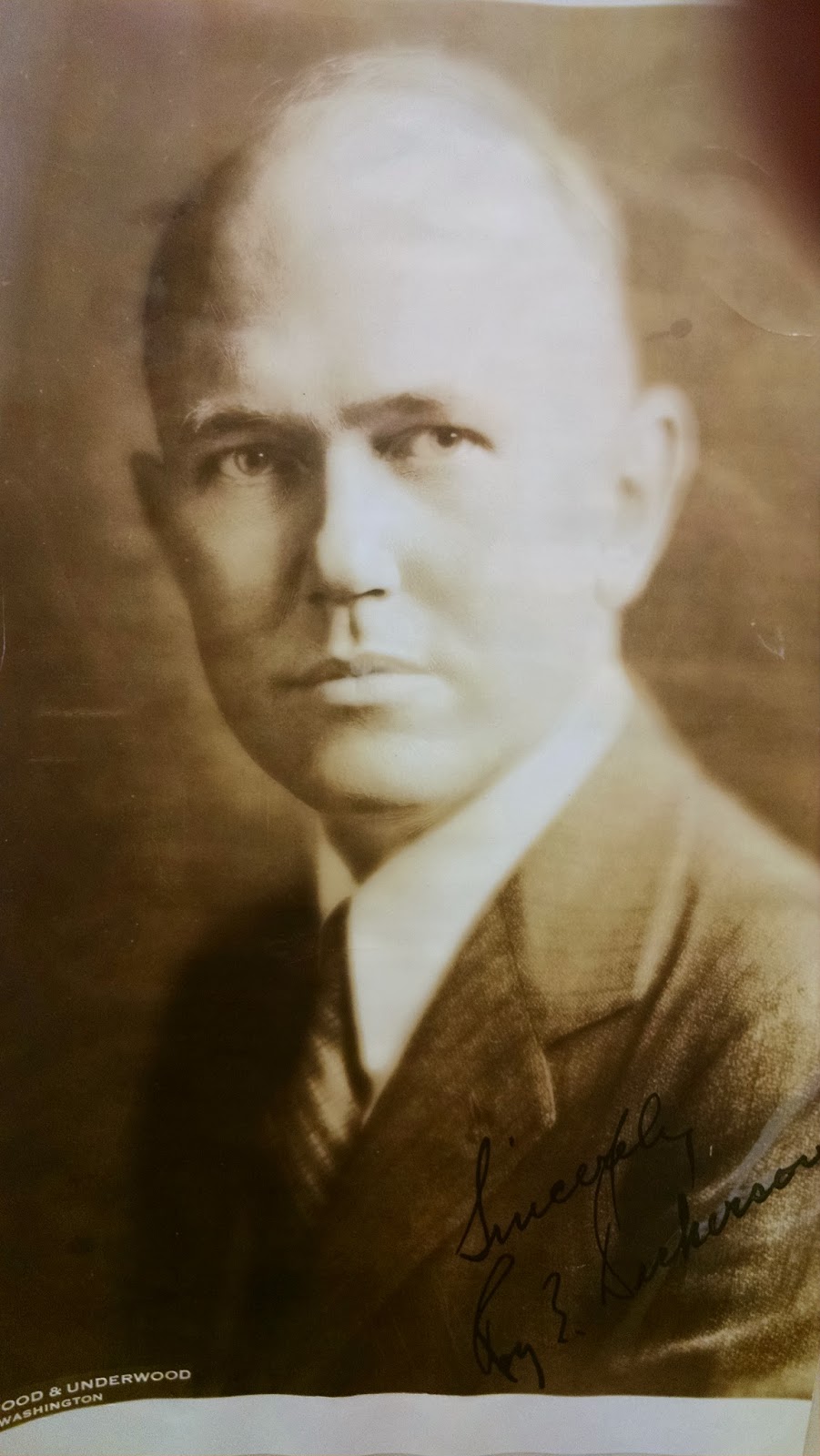 ...and "Dad" Roy Dickerson, who was in charge of programming for the Grand Council, and worked in the Kansas City offices with "Dad" Land.

The question of WHY this volume is in the possession of DeMolay International is answered by the fact that the first scrap-book of news clippings and letters related to St. Paul Chapter was also in the book case.  Either he left it to DeMolay International, or his family sent it in, not realizing exactly what they had in their hands.

Some of these signatures have serious value on the collectible market, and, as a complete themed collection of famous Masons, it may have even more value than we can imagine. 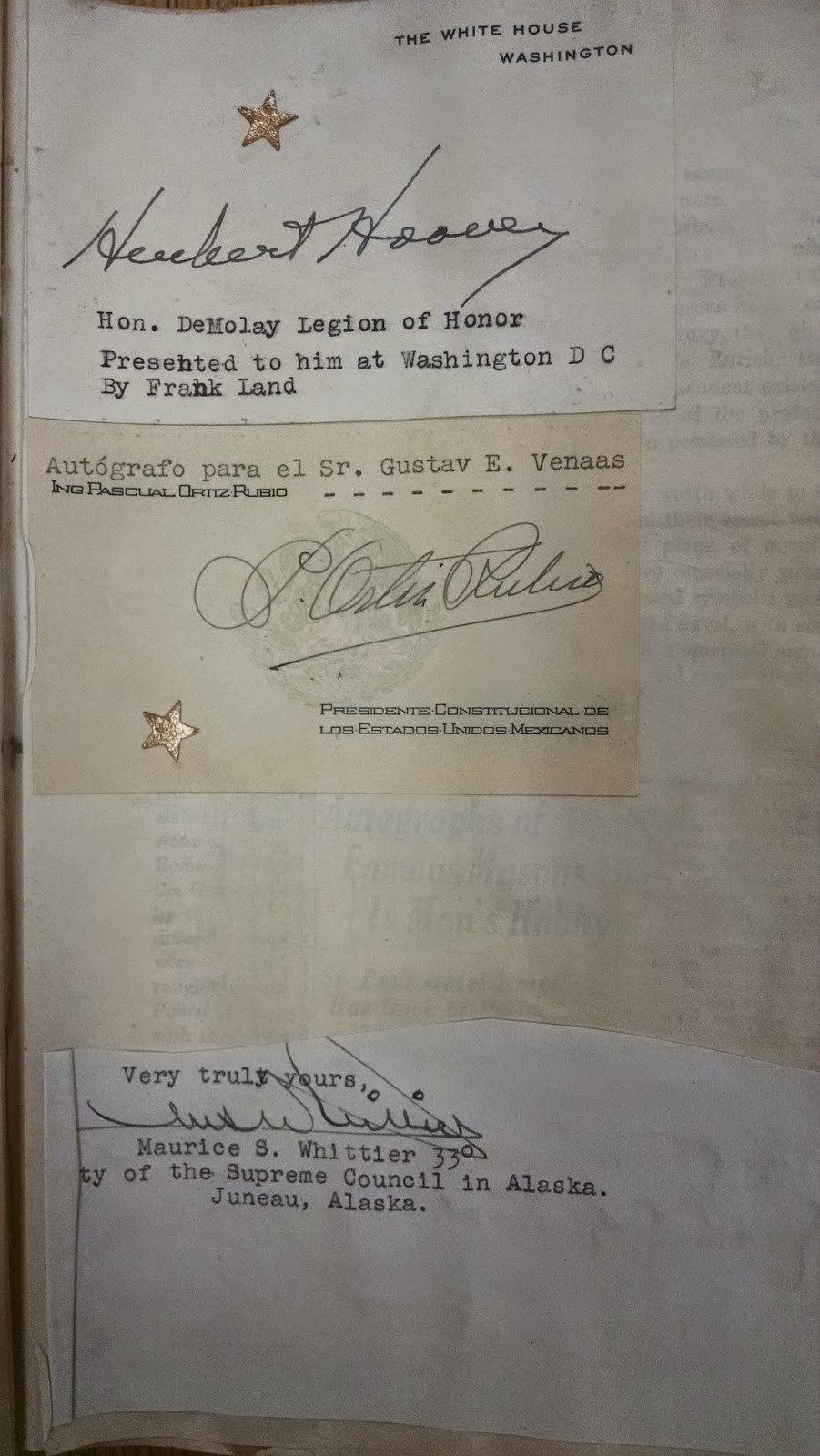 The signature of a President of the United States is always worth something, if it is really his signature and not a staff member who has learned to fake it, or a machine that makes a perfect signature every time.  This one from Herbert Hoover, the 31st President, looks legitimate, and considering the time it was sought, it is quite likely to be real.  Not known as one our our best Presidents, he presided from 1921 to 1928. http://en.wikipedia.org/wiki/Herbert_Hoover 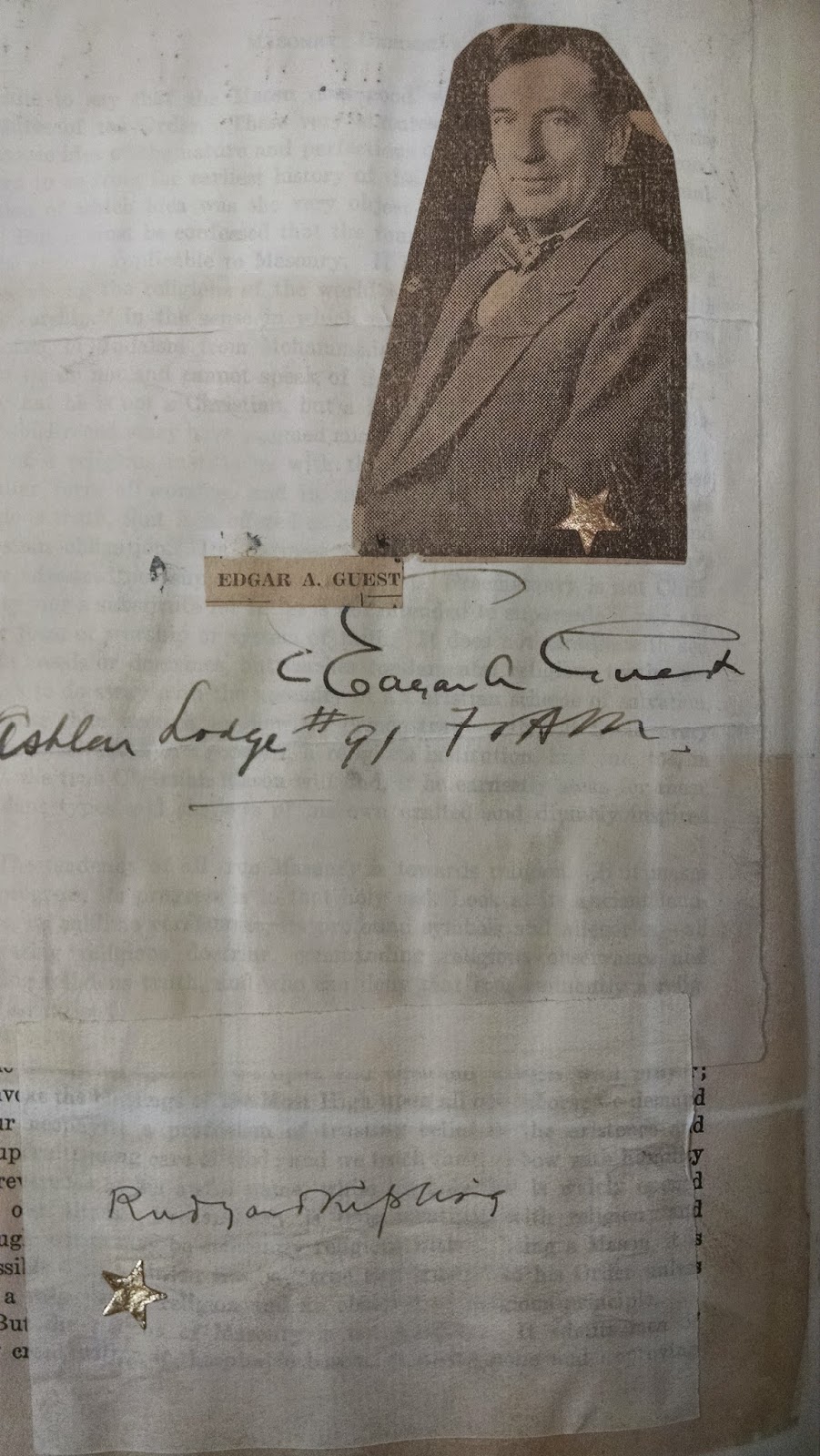 These signatures got me excited, because I love poetry and authors, and Edgar Guest was one of the most popular poets of the early 20th Century.  For more information about him, and a sample of his easy-rhyming poems, go to http://en.wikipedia.org/wiki/Edgar_Guest

The signature at the bottom of the page is even more impressive.  Rudyard Kipling, the author of The Jungle Book, Kim, The Man Who Would Be King, and may poems, notably Gunga Din, and Danny Deever.  Kipling was a British Mason in the country of India, when the British military occupied the country, and he wrote about his experiences in a Lodge with men of multiple religions working together in peace and harmony.  He is revered for the many Masonic references included in his writings.
http://en.wikipedia.org/wiki/Rudyard_Kipling 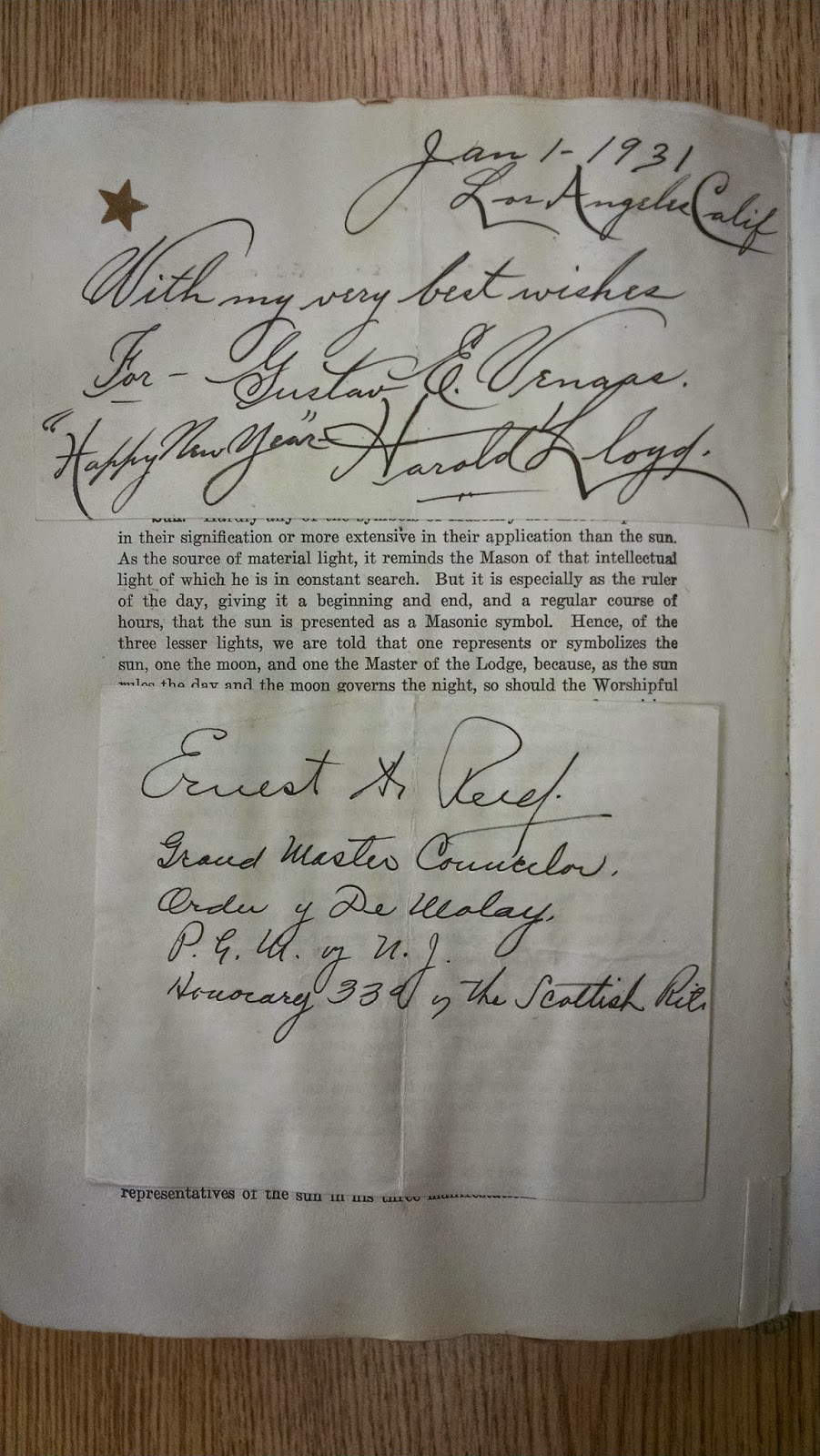 This page initially caught my eye because of the signature of Ernest A. Reed in the center of the page.  I knew of him because he was a Grand Master Councilor of the Order of DeMolay from New Jersey, my home state.  He was probably the "founder" of DeMolay in New Jersey, if I recall correctly.  But the astonishing signature at the top is of greater interest-- it is of the silent film star, Harold Lloyd.  Best remembered for a stunt where he is hanging from the hands of a large clock on a skyscraper, Lloyd was one of the most successful comedic silent film stars, rivaling Charlie Chaplin and Buster Keaton.  Lloyd was also a very active Freemason, involved in many appendant bodies.  He had a special affinity for the Shriners Childrens Hospitals and Burns Centers because of serious burns he had suffered in his life.  He served as Imperial Potentate of the Shrine of North America in 1949-1950.
http://en.wikipedia.org/wiki/Harold_Lloyd 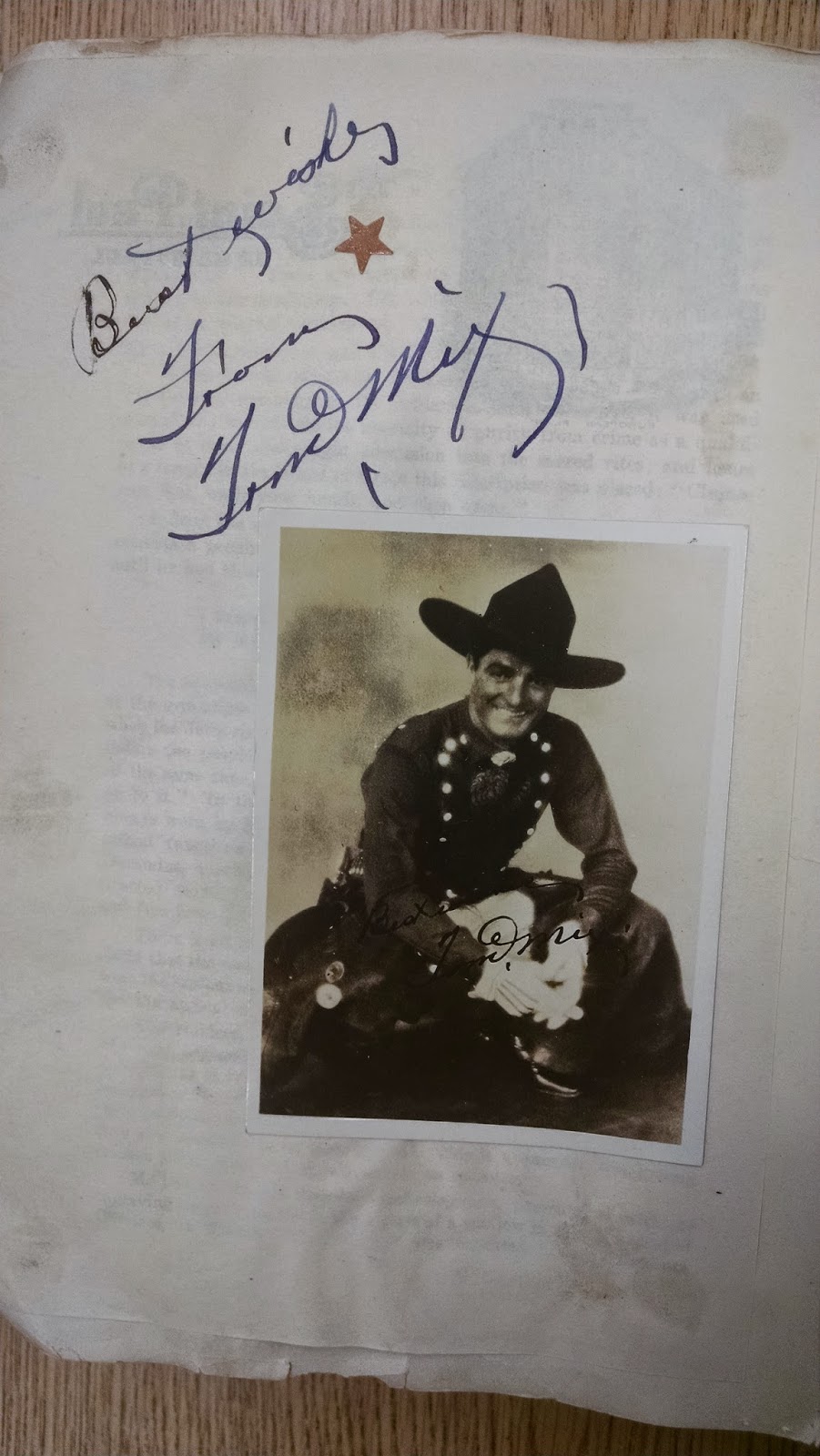 Here's a name you MIGHT have heard, if you or your father grew up watching Western TV shows and movies.  Tom Mix was known as Hollywood's first major Western Star, making 291 films in his career, all but 9 of them silent films.  Less than 15% of those films are available for viewing today, as film preservation wasn't thought of in the early days of film,  Mix was a Pennsylvanian, having been born 20 miles north of State College, and growing up in DuBois, PA.  It is reported that Mix helped John Wayne (Senior DeMolay, Freemason, Shriner) get his first jobs in Hollywood.  http://en.wikipedia.org/wiki/Tom_Mix 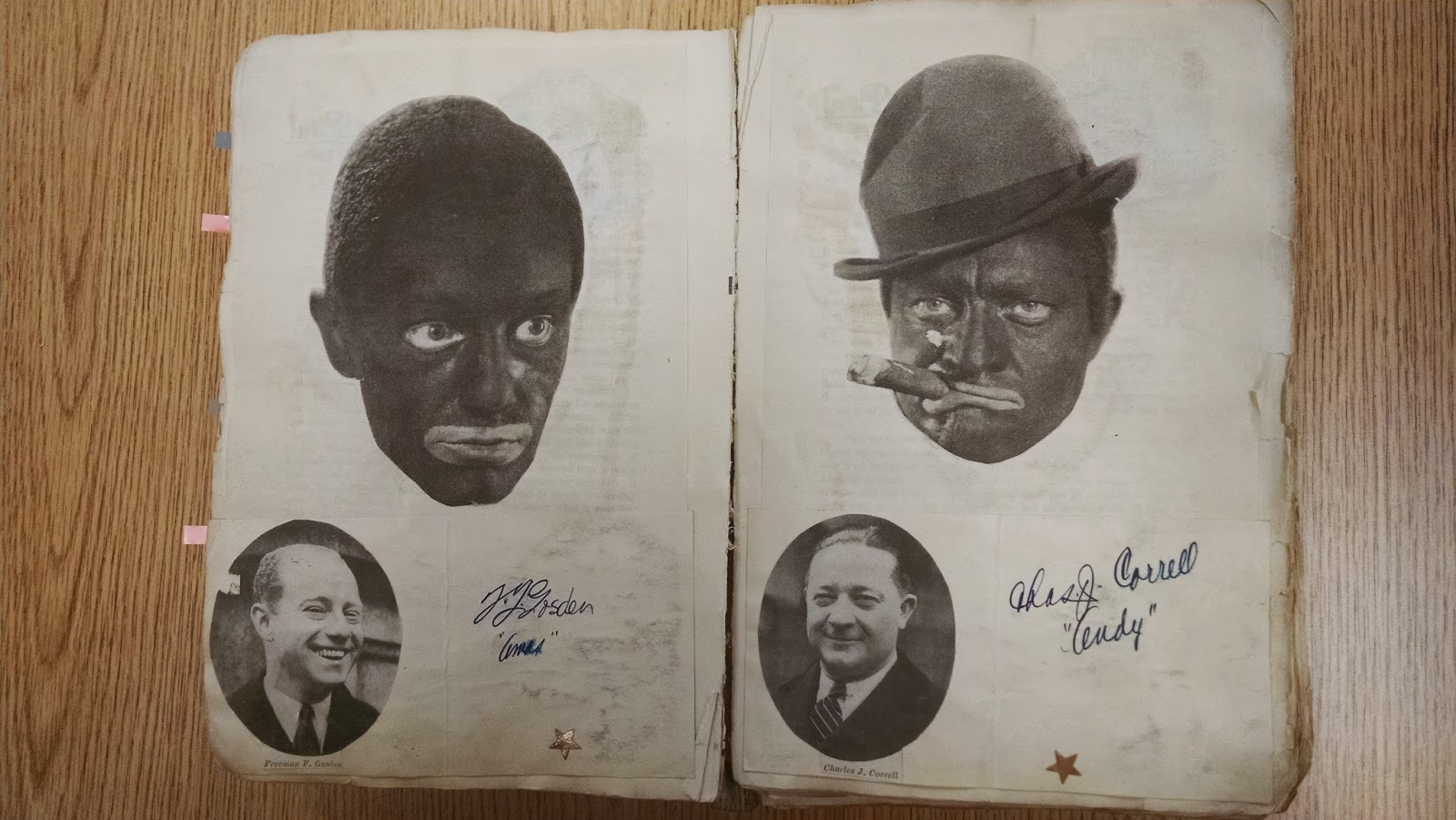 They certainly aren't "politically correct" these days, and they earned their living perpetuating some disturbing stereotypes, but there is no denying the "star power" of Freeman Gosden ('Amos') and Charles Correll ('Andy') who performed on the radio, and at public appearances from 1928 to 1960.  http://en.wikipedia.org/wiki/Amos_%27n%27_Andy 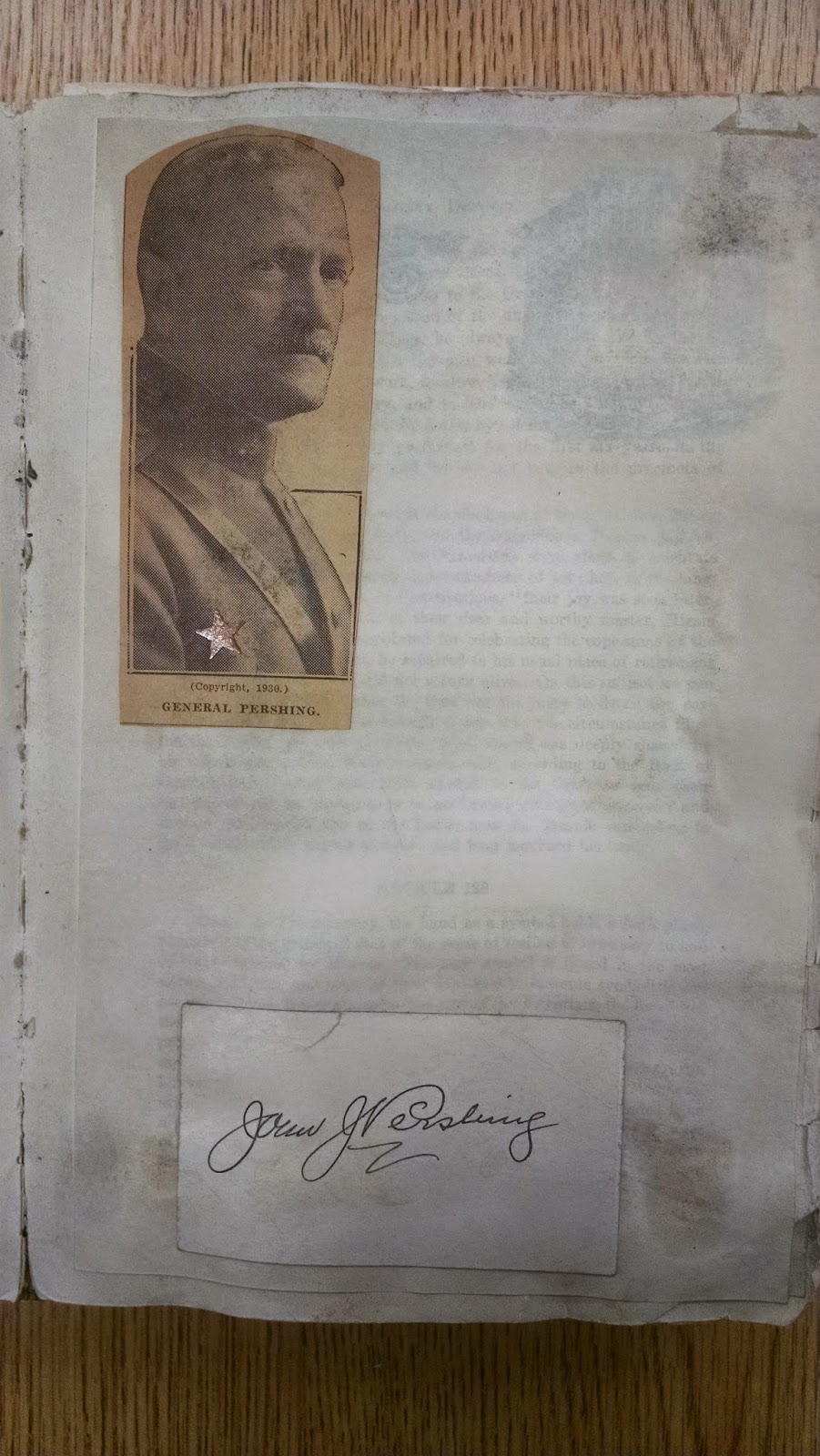 General John J. Pershing led the American Army victory in World War I.  Known as "Black Jack" Pershing, he mentored some of the key generals of World War II (Eisenhower, Bradley, Marshall and Patton) and had a profound effect on the US military's world dominance of the 20th century.  http://en.wikipedia.org/wiki/John_J._Pershing 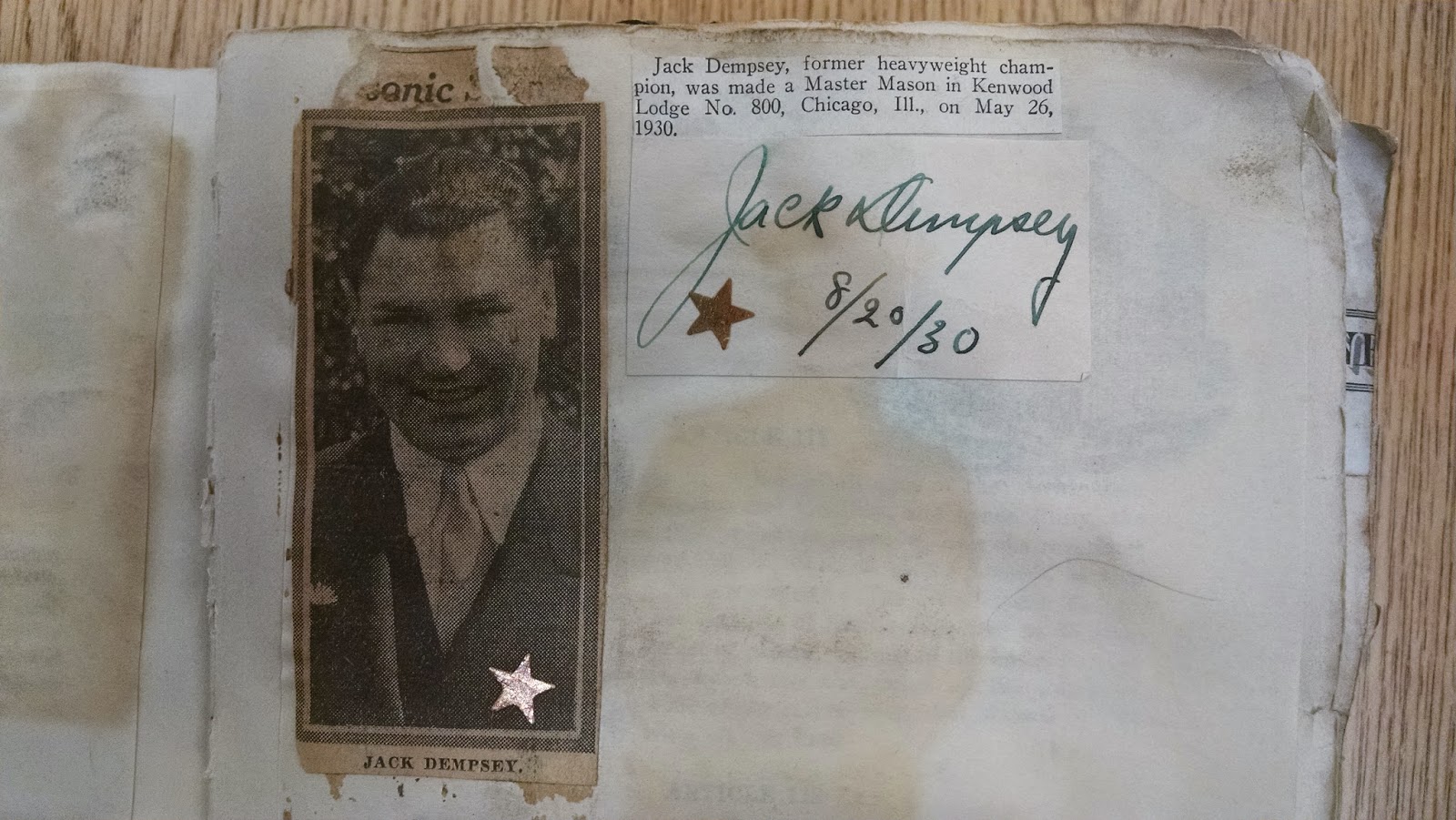 Jack Dempsey was a prize fighter who owned the Heavyweight championship title from 1919 to 1926.  Considered to be one of the most powerful and relentless fighters of the first half of the 20th century.  He was a Freemason in Kenwood Lodge No. 800 in Chicago, IL.
http://en.wikipedia.org/wiki/Jack_Dempsey 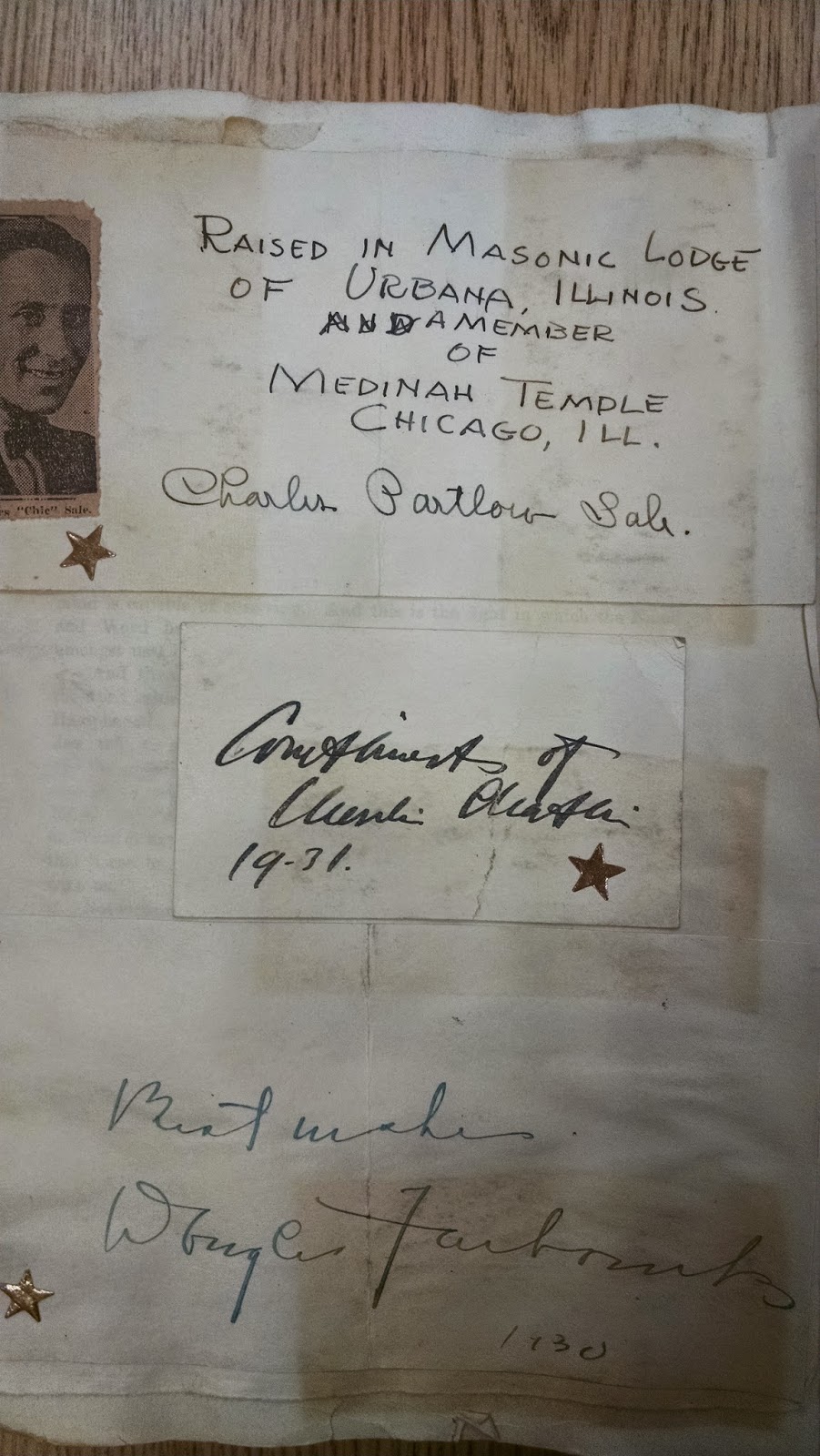 At the top of this page is the signature and Masonic record of Charles Partlow "Chic" Sale.  That is NOT a name I was familiar with, but, he was a BIG name in the 1920s.  A vaudeville comedian and entertainer, he parlayed a long running joke about outhouses into a comedic career. It is interesting to note that the 1950s-1960s comedian, Soupy Sales, created his last name in honor of "Chic" Sale.   If you are interested in him, here is a Wiki about  him.
http://en.wikipedia.org/wiki/Charles_%22Chic%22_Sale

I cannot read the middle signature, but the name at the bottom is of the great romantic silent film star, Douglas Fairbanks, who, with D. W. Griffith, Mary Pickford and Charlie Chaplain established the United Artists motion picture studio  in 1919.
http://en.wikipedia.org/wiki/Douglas_Fairbanks 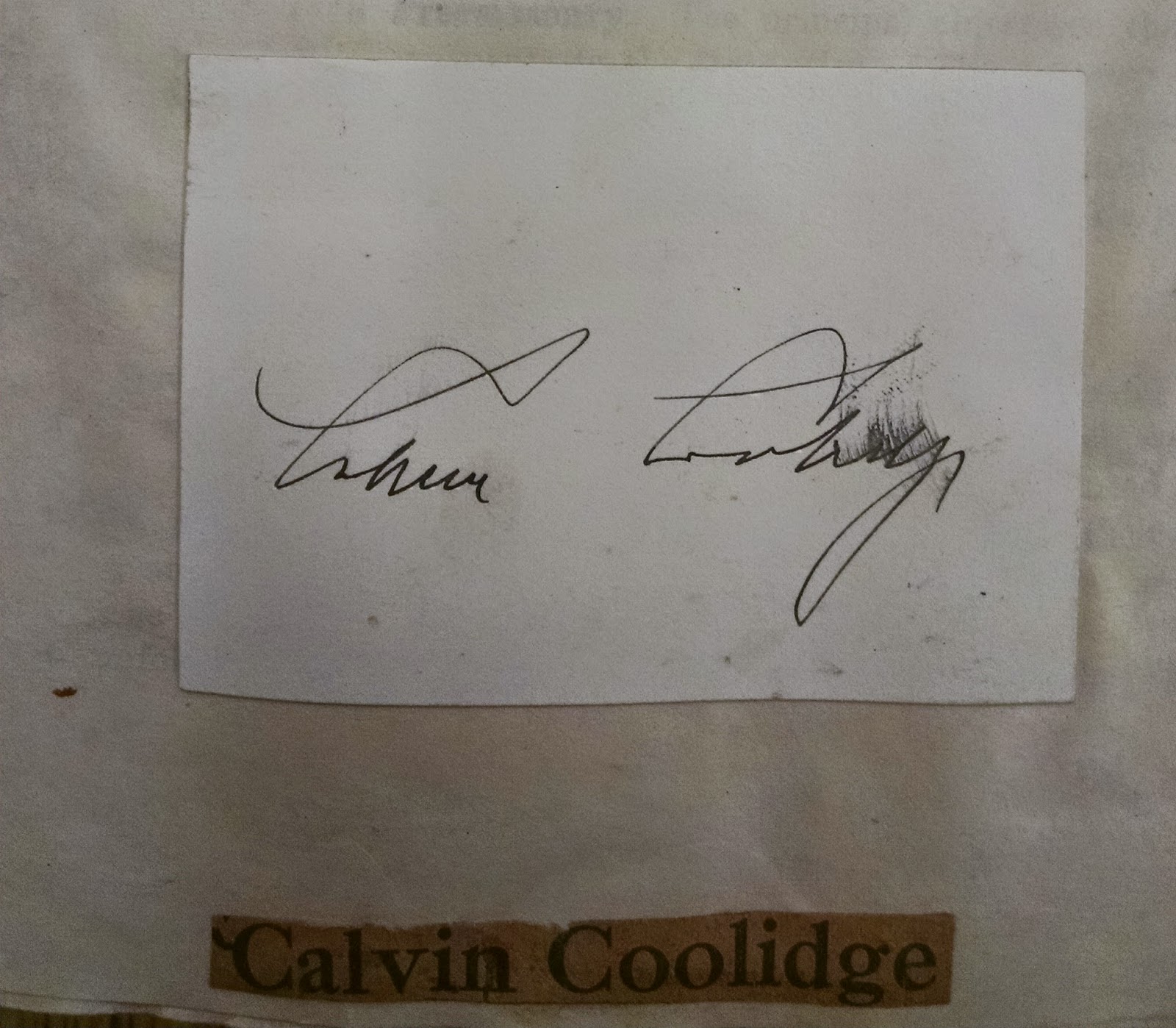 This is a fascinating signature by Calvin Coolidge, President 1923-1929, and it may have been acquired BEFORE he was President.  What makes it unique is that it is smudged by the signer, (and from all the examples I have seen on the internet, it is his signature, and not that of a White House secretary.)  I almost think this makes it more unique, because very few collectible signatures are ever seen in this condition!  The imperfection makes it a one of a kind example.
http://en.wikipedia.org/wiki/Calvin_Coolidge 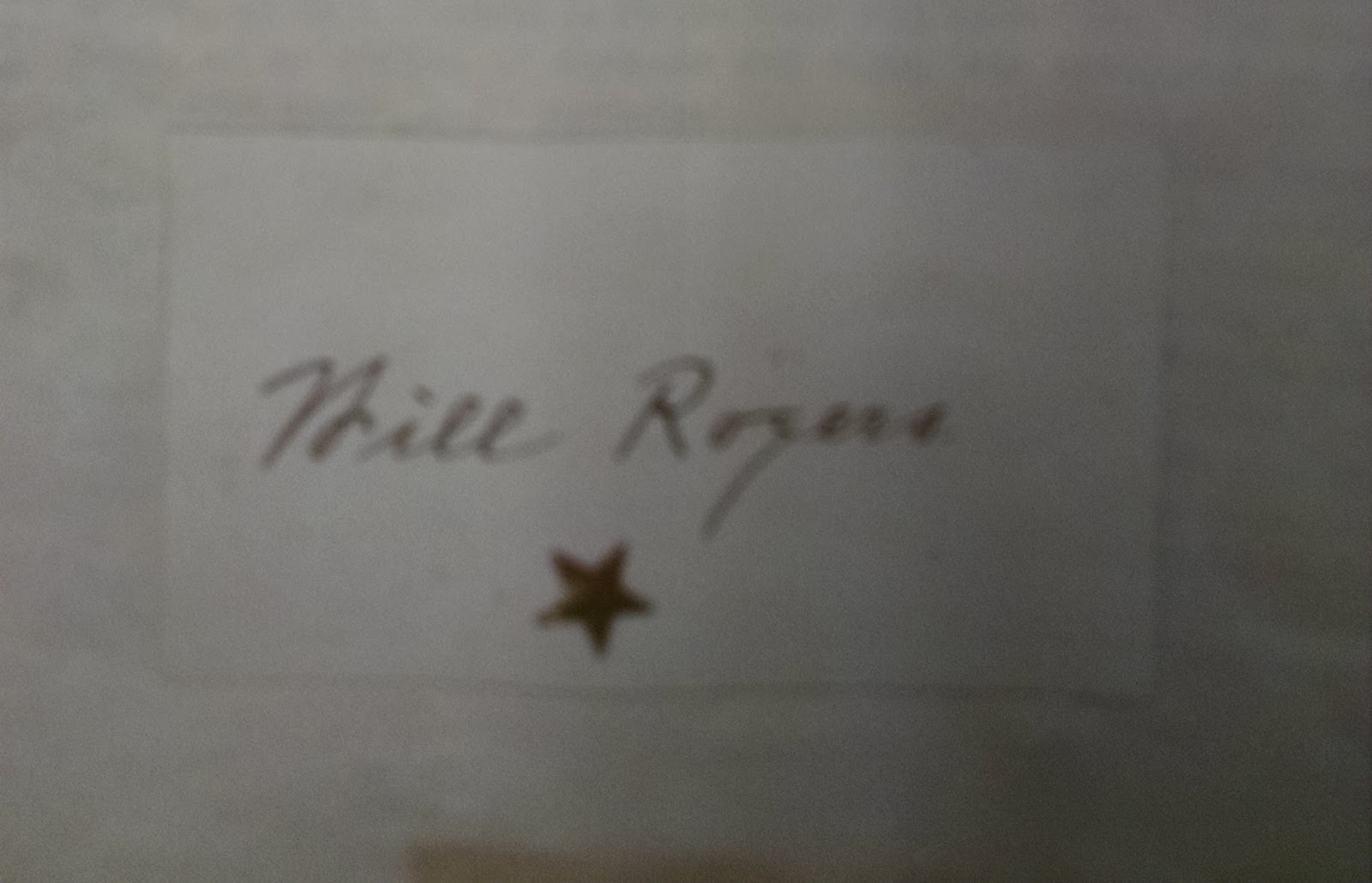 The only blurry photo I took had to come with a very important signature--  Will Rogers!  This man and Mason was a great political commentator, humorist, entertainer and film star of the 1920s and 1930s.  He was at the height of his popularity when he died in a plane crash in 1935.  He ran a mock campaign for President of the United States that was covered nationally.   One of his most famous quotes was "I don't make jokes. I just watch the government and report the facts."  http://en.wikipedia.org/wiki/Will_Rogers 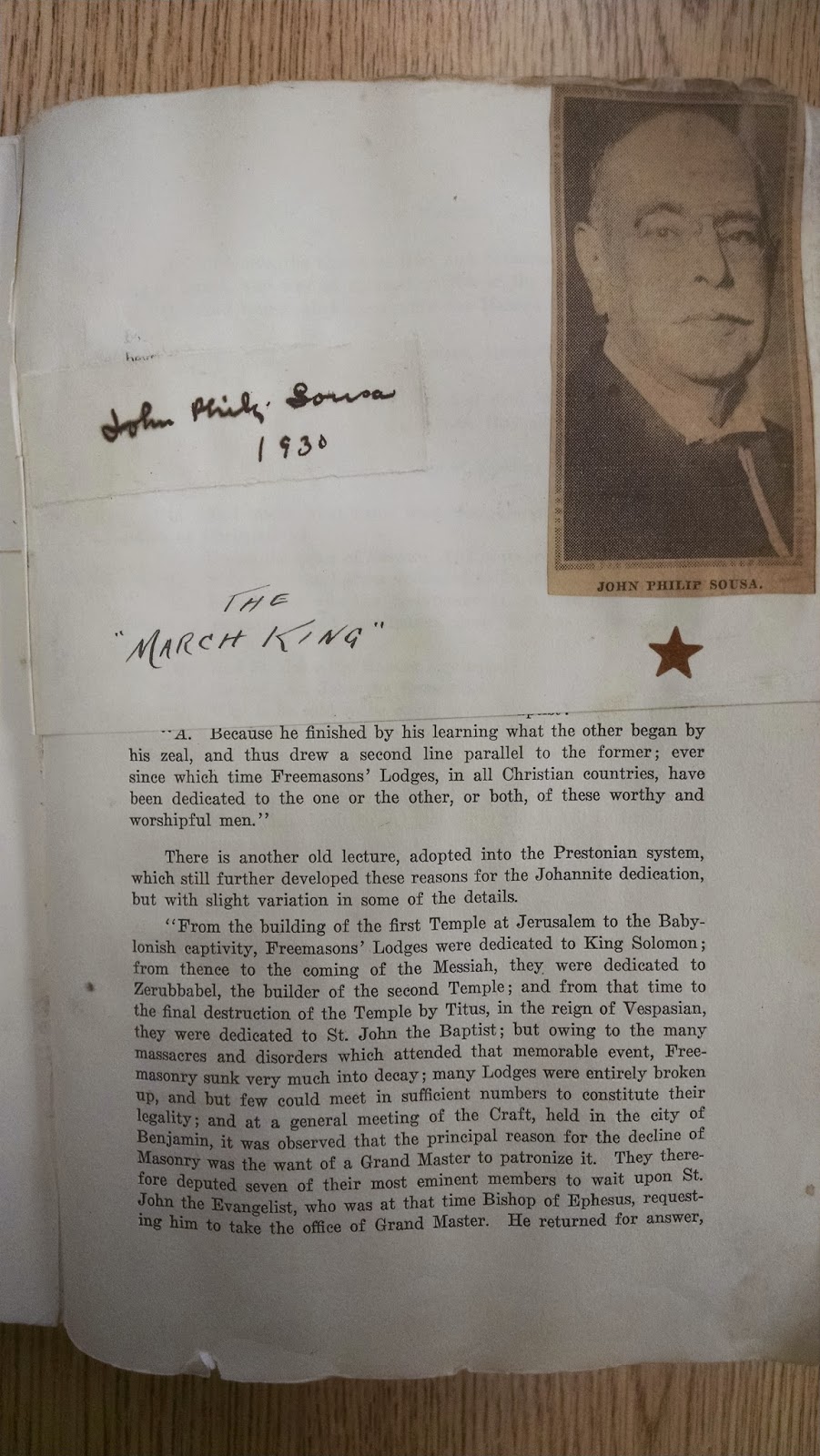 The signature and photograph above is of John Philip Sousa, known in his day as "The March King" for the plethora of marching music he as written, including the Stars and Stripes Forever, The Liberty Bell, Semper Fidelis, The Washington Post and Nobles of the Mystic Shrine.  Sousa wrote 136 marches between 1917 and his death in 1932 at age 77.
http://en.wikipedia.org/wiki/John_Philip_Sousa 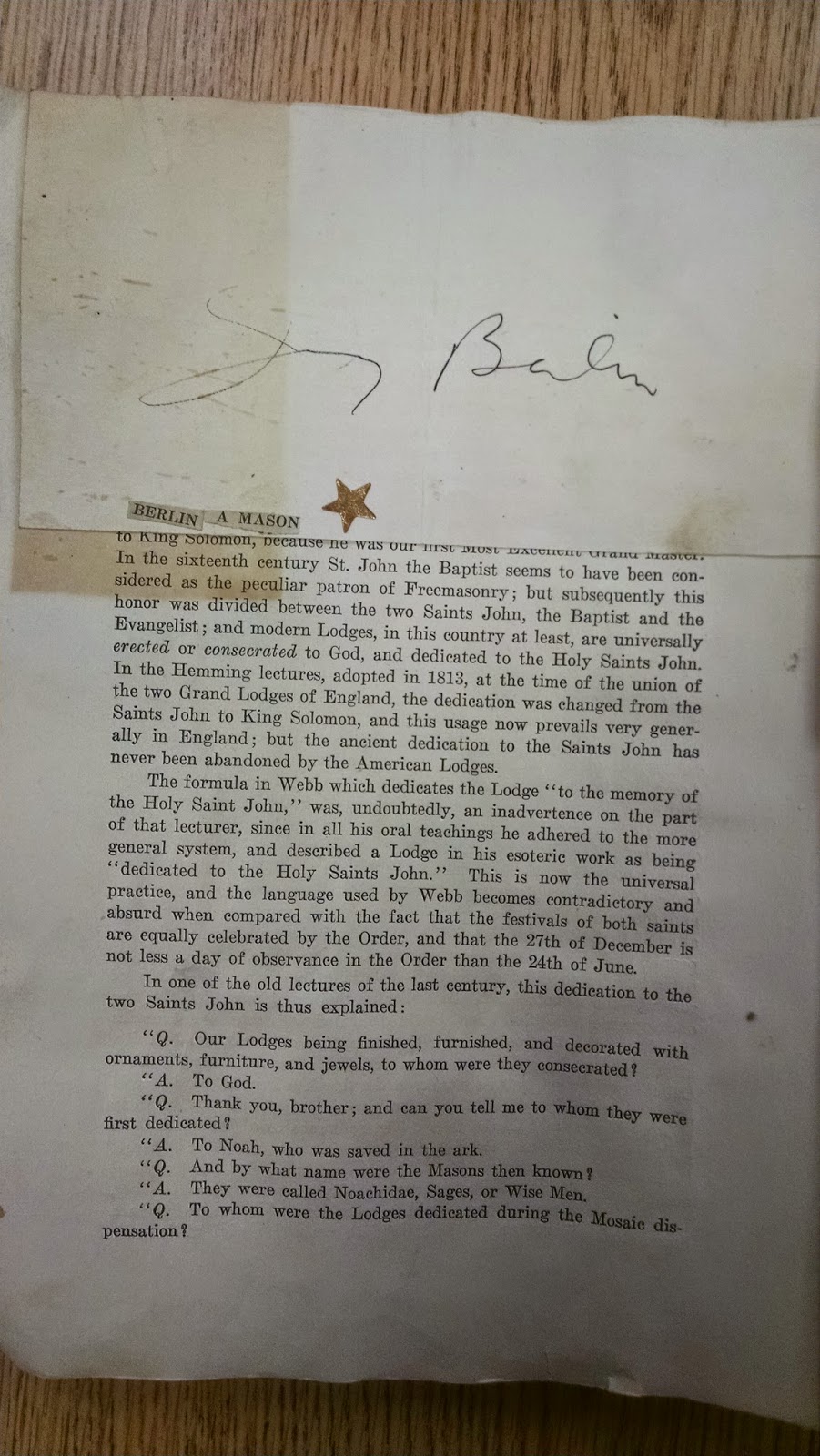 Irving Berlin's signature is at the top of the page.  You know who Irving Berlin is, right?  He was, perhaps, America's songwriter in the 20th Century. Writing for Broadway and for the movies, he penned classics known worldwide such as "God Bless America," "White Christmas," "Alexander's Ragtime Band," "Blue Skies," "Easter Parade," and every Mel Brooks fan's favorite, "Puttin' on the Ritz!"  http://en.wikipedia.org/wiki/Irving_Berlin 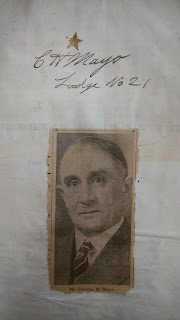 Charles H. Mayo was a co-founder, with his Father, William W. Mayo, and his older Brother William J. Mayo, of the private medical practice that became known as the Mayo Clinic in 1919 in Rochester, MN.  The clinic was, and still is, a marvel of integrated medical specializations.  Interestingly, Mayo received the Founders Cross from Dad Land for personal loyalty and dedication to the Order of DeMolay.  Another interesting fact-- like Dad Land, Mayo's admirers have preserved his office exactly as it was on the day he died, and a tribute and museum to his work.  http://en.wikipedia.org/wiki/Charles_Horace_Mayo 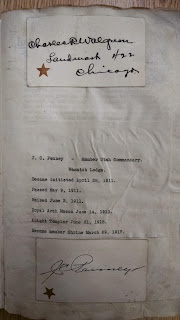 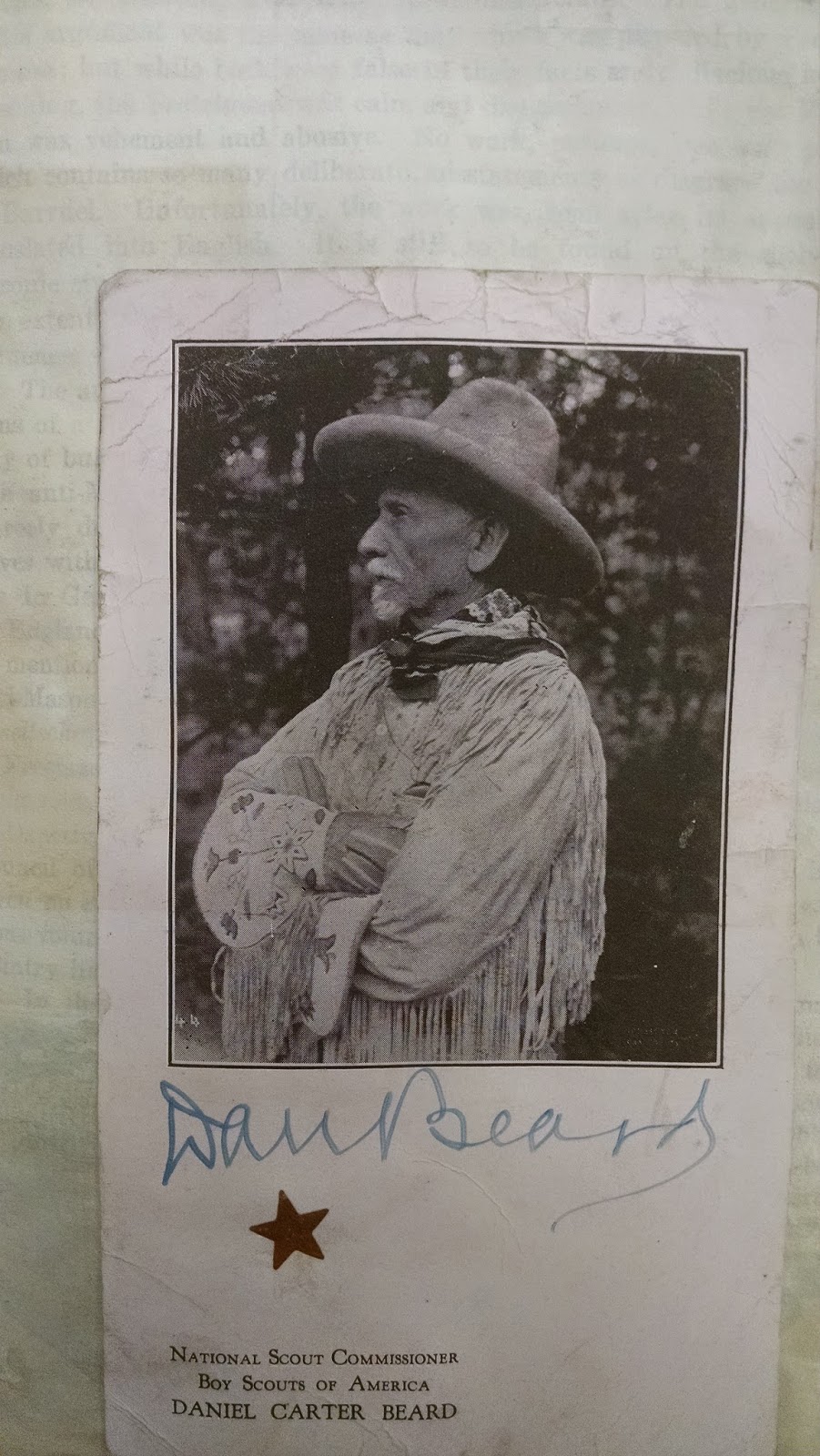 Daniel Carter Beard is a name well-known to Boy Scouts as the American who worked with Lord Baden Powell and merged his Sons of Daniel Boone with Powell's Boy Scouts.
http://en.wikipedia.org/wiki/Daniel_Carter_Beard 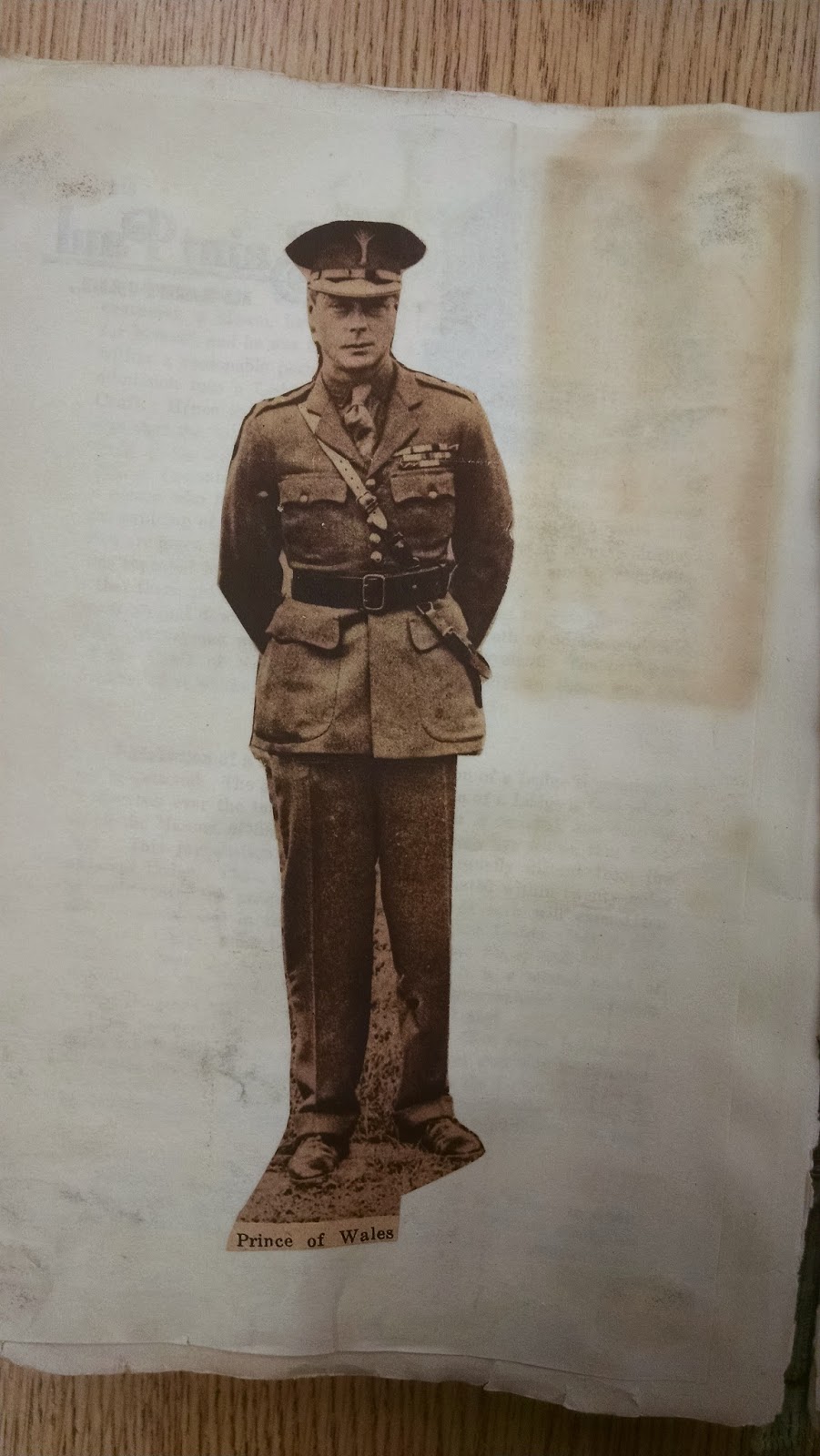 Prince of Wales, Later King Edward VIII  This is one of the few photos pasted in the book that did not have an accompanying autograph, suggesting that one had been requested and expected, but either never returned or, for some reason we will never know, it never got pasted into the book.  http://en.wikipedia.org/wiki/Edward_VIII 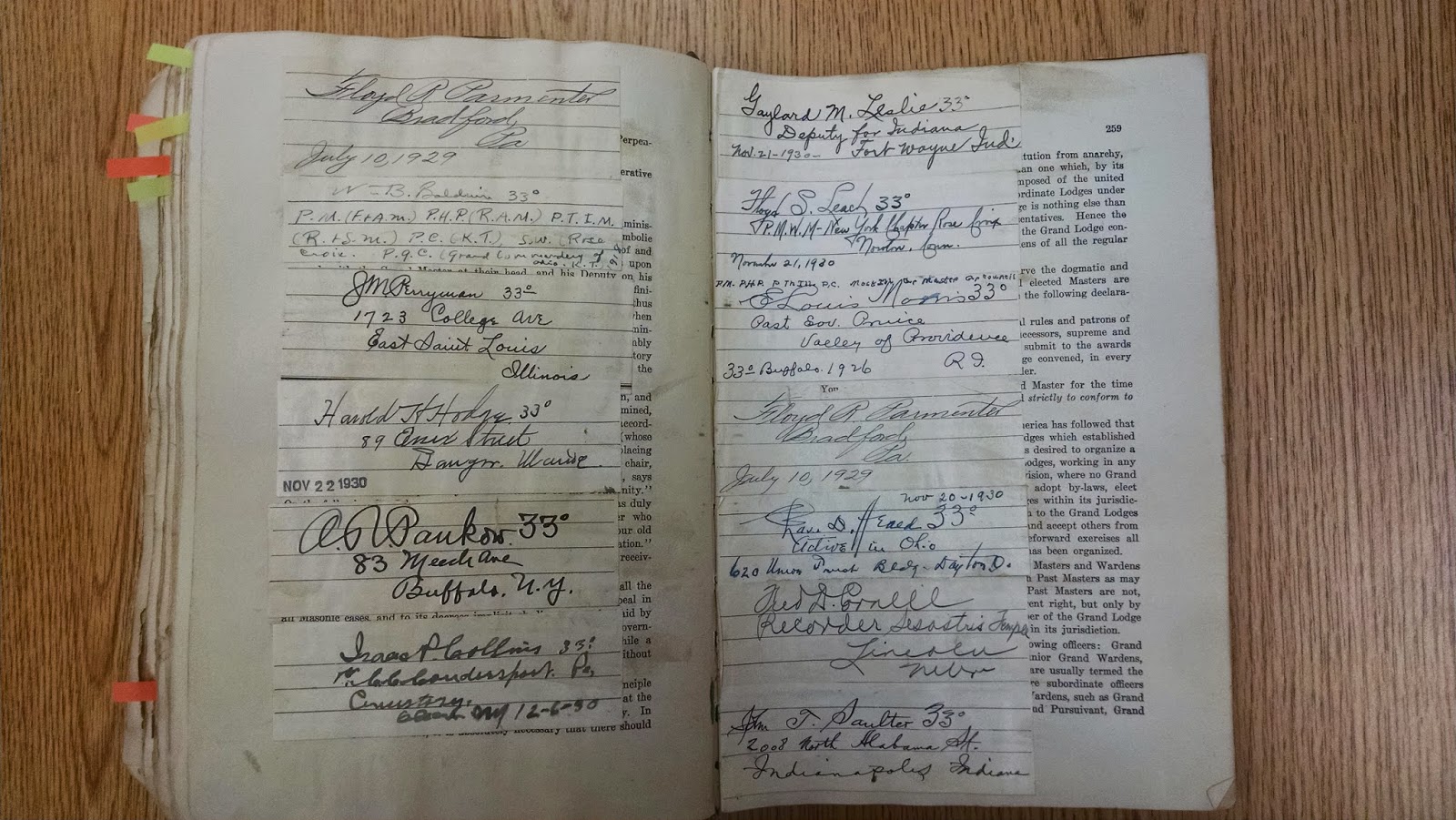 There are perhaps 150 more autographs in the book, and many were prominent Freemasons of that day.  There are possibly others, of great value and historical interest, that I did not notice or could not read.  As a collection, it is, in many ways, priceless.  As individual autographs, most of these have 3-figure values.

We are probably indebted to "Dad" Lester W. ("Sarge") Israel, Archivist of DeMolay International during the traumatic moving years of the early 1980s when the offices occupied no less that 4 different spaces in a period of less than 6 years, that this volume survived being tossed into a dumpster.

As an object lesson to all of us, "don't judge a book by its cover!"

Posted by PA DeMolay News and Views at 12:30 AM