I was going through some of the DeMolay International Cordon Magazines, a source that has been helpful to provide some of the information you have already read. In looking into some of the issues from the 1970's, I learned that DeMolay International kept track of some interesting marathon records that chapters took place in. Almost all of these marathons took place during the summer months, due to members having more time with school letting out. A few of the marathons even involved Chapters from Pennsylvania.

In 1970, Springfield Chapter played a lot of Ping Pong. How much is a lot, you ask? Try 600 hours of Ping Pong. The picture below shows the listing of new records from 1970. The issue of the Cordon is the March 1971 edition. While you're at it, take a look at some of the other records set in 1970. This record is not the only unique record reported to DeMolay International on behalf of a Pennsylvania Chapter. Tune in tomorrow for another DeMolay Marathon, from a well known Chapter that is still active today. 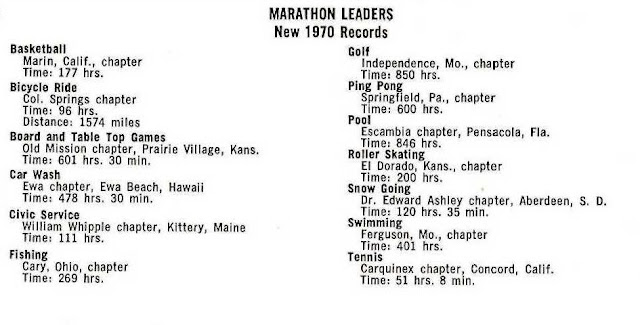