"Dad" Wilbur L. Minich was a dedicated Advisor of Pilgrim Chapter for many years. In yesterday's post, a page of the program was dedicated to his service, as he passed away shortly before the release of the 50th Anniversary Program. He served as the Chapter Advisor of Pilgrim Chapter for many years and served as a DeMolay District Deputy from 1927 to 1959. He achieved every honor and award known in DeMolay, including the Founder's Cross.

The picture and article below are from a special recognition held at the Harrisburg Scottish Fall Rite Reunion in 1962. "Dad" Minich was recognized by Pilgrim Chapter with a special scroll, while he also earned the Meritorious Service Award from his Consistory. Many DeMolays attended this presentation, as shown in the photo. 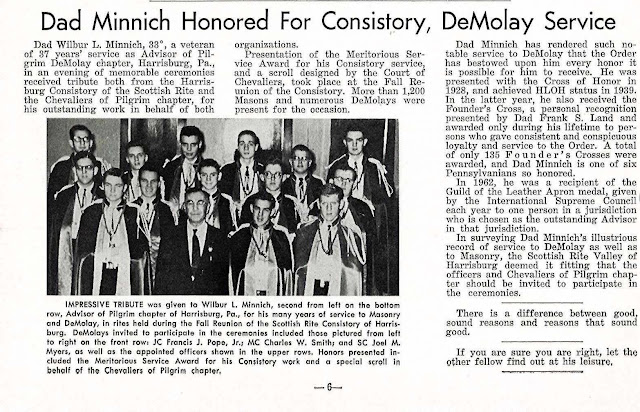 Until next time - "Dad" Joe Pullin
Posted by PA DeMolay News and Views at 2:43 PM