To celebrate the DeMolay Centennial, PA DeMolay will be observing 100 memories worth celebrating that took place within the DeMolay Chapters and Jurisdiction of Pennsylvania.

The Founder’s Cross is an award that was given out by the Founder of DeMolay, Frank S. Land. "Dad" Land gave the award to several deserving individuals who were loyal to him and to the Order of DeMolay. Below, you will find the proper description of the award, according to the 9th Edition DeMolay Handbook: 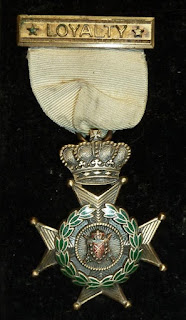 "The Founder's Cross is the most prized and highest distinction that could possibly come to anyone connected with the DeMolay movement. The award is not a Supreme Council honor but was a personal recognition by the late Dad Land of those whom he desired to honor for their personal, consistent and conspicuous loyalty and service to him in making the Order of DeMolay the greatest youth movement of its kind in the world.The award was established in June, 1937, and only 135 were presented up to Dad Land's death on Nov. 8, 1959. The Founder's Cross is now officially retired."

Of the 135 awards given out, 11 of them were given to representatives of Pennsylvania DeMolay. Here are the names of the Pennsylvania recipients:

Posted by PA DeMolay News and Views at 2:42 PM